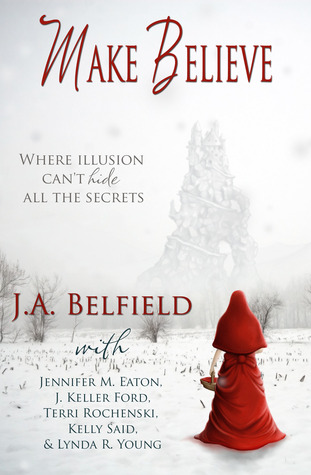 Cover Review
Way back in May when I did the cover reveal for this anthology this is what I thought to the cover.


I like this cover as it is very wintery looking so appropriate for the time of year of it's release. there's a little bit of mystery there as we only see the back of the person in the red outfit. I also love books that have bylines on them. On this book the byline reads "Where Illusion can't hide all the secrets..." so it makes you wonder about the book.
I am looking forward to hopefully reading and reviewing this book.  I love anthologies as it's a less expensive way of trying new authors that you haven't read before. J. A. Belfield is headlining this book, which is good as I love her style of writing even if the short tale in this book is not a Holloway pack one, I am sure I will enjoy it! I also like the sound of the other short tales in the book too.

So now I have read the book does my opinion change. Not really I would only add that I personally think the girl in the red cloak that appears to be travelling to the castle, is Loclyn the wiccae from Petrified by Kelly Said. It is a good representation of a scene from that short story.


Sacrificial Oath by Terri Rochenski
An impetuous act unwittingly makes Alesuela the fulfillment of the Sovereign’s Blood Oath to their Goddess. In five days, she’ll be forced to make the greatest choice of her life: become the virginal sacrifice already promised, or force the man she loves most to die in her place.
MY REVIEW
A really great start to the anthology, this story has a mythical edge in that the people in the book pray to the goddess. Alesuela's father, King Amant is away at war, so she is praying to the goddess for his safe return, whilst somewhere in the heat of a battle, the King is making a blood oath to the goddess in return for the safety of him and his men. The King Amant
swear 's he will sacrifice the first virgin he sees upon his return to the castle. Fate plays quite a mean hand in that it creates a no win situation for King Amant and his beloved only daughter, Alesuela. What will they choose to do? Go against the goddess, try to haggle a different bargain with the goddess, or go through with the blood oath?
I really enjoyed this one, it flowed well and though short had plenty going on and plenty of little twists and turns and discoveries to be made. I will definitely be checking out more titles by this author!
So to score out of 5 as I usually do with anthologies......5/5! loved it!

The Amulet of Ormisez by J. Keller Ford There is only one way to save Elton Fletcher’s brother from an insanity-ridden death. After years away from home, fighting for his people, Elton returns to discover his only sibling, Cayden, possessed by greed and malice, and responsible for malicious, unthinkable deeds. Cayden, though, isn’t the only one afflicted by the Amulet of Ormisez, and Elton finds himself in yet another battle, where the price of failure could be his own life.
MY REVIEW
This short story has two brothers in it, Elton (the eldest) who has been away at war against the selkies and Cayden the younger brother who stayed behind, with his parents and fianceé.
Elton return to a very changed Cayden. Cayden has married Marsali de Ceara as his parents and previous fiancee died from a disease that could not be healed.
The story revolves around an Amulet that Cayden wears. Since he began wearing it he has become gradually worse, greed etc
There's lots happening in this story but to say much more would reveal too much of the tale. I also enjoyed this tale very as I have not read a great deal about selkies. I would look out for other books by the author and dependent on blurb seriously consider reading them.
So I would give 4/5

So after reviewing this anthology I guess I should give an overall comment too. This anthology is brilliant. I loved J Taylor Publishing's last anthology Tidal whispers and I love this one too! When's the next one?? This anthology has a really great mix, with something for everyone, not just the paranormal fans! I would love to see some of the short tales in this anthology become part of their own series. I enjoyed all the authors in varying degrees, and there were none that I would say I wouldn't want to read again
Posted by Jeanz xx at 10:00