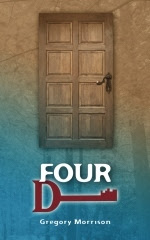 FOUR D is a first book from the trilogy. It is a puzzle book. As storyline progress all characters will be interconnected...
Four D consists of four chapters: “Space”, “Four Rooms”, “The Principle of Luidgi”, and “Guest”.
“Space” is a story about disappearances. The characters lives in a world of disappearing people and objects, which might or might not be important. In such a flexible reality, one should not get used to or attached to anything. However, the main character falls in love and finds a best friend despite all risks. To top it all off, he is visited by Space—the power that stands behind all the disappearances.
“Four Rooms” is a story about a young woman called Elise. Elise had always been a prisoner of her own mind. But at some point everything took a turn. She had to make a stand when she found herself at a life changing situation in a dark room with four doors. She has to open all doors and enter every room with its own mystery and secrets and has to do it immediately. Going through the four rooms is a challenge Elise has to complete to find something she needs so badly – the truth.
“The Principle of Luidgi” is a story about Luidgi. Luidgi has everything: a beautiful girlfriend, a good job, a lovely apartment, trusted friends but instead of being happy and grateful he’s sick and tired of it all. Luidgi decide to change everything despite all costs.
“Guest” is a story about the character who wants to meet the Guest. Finally one day he makes decision to do “it” and Guest arrives. Now all his questions are about to be answered, but is it really what he wants?
These tense mysterious stories with incredibly engaging plots will not leave any reader feeling indifferent

Gregory has kindly sent me a paperback copy of this book, so I will be reading and reviewing soon, it is in my to read and review pile!
Posted by Jeanz xx at 15:00