FALLING IN BETWEEN BY DEVON ASHLEY 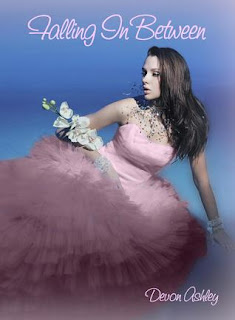 
Finally! A private conversation. And all I had to do was throw myself off a cliff, drown in a pond in my undies and let him put his hands on my breasts to bring me back to life. Yay me…(yeah, that’s sarcasm) Yep, that pretty much sums up the most craptastic night of Jenna Baker’s life. She drowns after jumping off a cliff, meets a hotty named Chance in the pearlescent in-between and is brought back to life by her soon-to-be boyfriend Robert. Just when things start to move forward with Robert, the guy she'd been crushing on for a year now, in walks the man of her dreams – literally. Chance suddenly appears in her dream every time she closes her eyes. So it's Robert by day and Chance by night. One in the real world and one in the dream world. What could possibly go wrong? Absolutely nothing – until she comes face to face with the guy she met in the in-between, and realizes her romantic rendezvous with Chance may be more than just her imagination. Note: Jenna's coming of age story is a little edgy. There is mild language and some sexual content.

First of all , I love the cover, which is obviously (when you read the book) the female on the cover is Jenna, in her beautiful Prom dress, with the gorgeous corsage that was bought for her by ..........(read the book....no spoilers here!)
I really enjoyed the wit and humour in this book, sure its a little edgy and has mild language and sexual references and innuendo but its all done with taste and in context. To be totally honest I think that today's teenagers see and hear much more explicit language and innuendo on TV shows, Films and even in the school setting. This book also has some romance in it but not the yucky slushy slushy stuff more very well written coming of age romance.
There's a part in the book where there's the scandal that a girl has become pregnant whist living in the schools halls, so the Sports department hand out condoms to all the guys, which I would say is a pretty positive message to give to our teenagers, lets accept we cannot prevent them from .....shall we say experimenting, so maybe the best we can do is make sure that they are prepared for the..er event.
I loved the relationship between the four friends, Robert, Jhett, Sophie and Jenna. Jenna is the only one from a poor background and has never actually experienced anyone loving her or having anyone to love herself. Jenna doesn't feel sorry for herself though, she's a hard worker, and has her scholarship.
Sophie and Jhett's relationship is moving at a much faster pace than that of the less experienced and shy Jenna and Robert's relationship.
Then when Jenna goes to sleep she has this kind of racy dreams about a guy called Chance. The type of relationship Jenna and Chance have is much faster paced and of course because Jenna is in the security of her dreams she is much less inhibited than in her real life relationship with Robert. Robert is a nice guy, who agrees to take things slowly with jenna where as her "dream" guy Chance is a rather more forward "naughty" boy who likes to push and conquer Jenna's boundaries.
So who is Chance really? Is Jenna cheating on Robert by meeting and fooling around with Chance in her dreams? Is Chance somehow Jenna's sub-concious preparing for her blossoming love and sexual relationship with Robert? Can Jenna allow herself to accept Robert's love and affection? Will chance ever leave her dream world? If it wasn't for chance would Jenna and Robert have gone further with their relationship by now? These are lots of questions you will be able to ponder and perhaps answer when you have read this well written teenage aimed book.
From my "About Me" section you will see I certainly don't qualify as a teenager but I really did appreciate the humour and wit in this book, and found it an enjoyable read that I didn't want to put down.
Would I recommend it? YES! Would I read a book 2? YES! What genre would you put this book into? Coming of Age,bit of romance,great book!