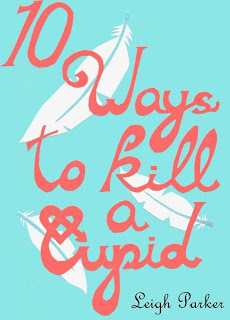 What is your name, where were you born and where do you live now?
My name is Leigh Parker and I’m from East Yorkshire, UK.

Did you always want to be a writer? If not what did you want to be?
I wanted to be an artist. I even tried my hand at pixel painting a couple of years ago. I went to art school and got a BTEC in Art and Design. Yeah, I have no idea what that is either.

How long does it usually take you to write a book, from the original idea to finishing writing it?
I first had the Idea for my Cupid story in 2000 when I watched The Princess Diaries on TV. A light bulb pinged above my head when the scene where Mandy Moore sings ‘Stupid Cupid’ came on and I thought that’d be a great story – An incompetent Cupid. The story has since evolved into something slightly different.

Do you have plans for a new book? Is this book part of a series?
10 Ways to Kill a Cupid is the first in (I hope) a trilogy. The next one is called 10 Ways to piss off a Reaper. But in between I’m writing a book called Fruitcake.

What genre would you place your books into?
I have a hard time figuring this out. 10 ways to kill a Cupid isn’t particularly romantic despite it having a Cupid as the main character…it’s more of an anti-romantic comedy story and there isn’t a category for that. I have no idea what genre Fruitcake is going to be under.

How long have you been writing?, and who or what inspired you to write?
I’ve been writing since I was 15 (I’m 29 now) and the lack of things to do on our brand spanking internet-less PC inspired me to write something on notepad. I think the first thing I completed was a horror film script I wrote back in 1997.
No one has really inspired me to write but my mam inspired me how to write. My books tend to be quickish 300+ paged reads with seemingly more dialogue than action. I remember talking to my mam about the books that she likes to read and she told me that huge blocks of action tend to bore her, so I made a mental note not to do that. I like to get straight to the point rather than waste a reader’s time on every minute detail.

Do you read all the reviews of your book/books?
Yes and I seem to see the word ‘Cute’ a lot. I don’t know if that’s what I was aiming for but I’m extremely happy with that.

What do you do to unwind and relax? Do you have a hobby?
I read a lot and I (try to) play the guitar and piano. I also pixel paint - http://leb82.deviantart.com

Is there a book you know you will never read? Or one you tried to read but just couldn't finish?
The only book I couldn’t finish was ‘Tender is the night’ by F. Scott Fitzgerald. I loved The Great Gatsby though. And I haven’t been caught up in the whole vampire/werewolf whirlwind. I can’t see anything appealing with Vampires. Now zombies on the other hand…

Is there anything in your book/books you would change now if you could and what would it be?
Yeah, there’s a lot of swearing in my book and I wish I could cut a couple out. It’s the only extreme thing about my book though and it is essential to the plot.