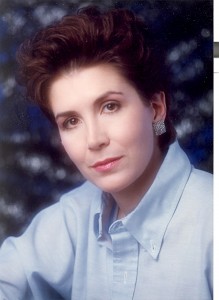 What is your name, where were you born and where do you live now?
My name is LJ DeLeon. I’m an army brat who was born in California. Between my childhood and  marriage to a career CIA Officer, I’ve lived as many years in Europe and Asia as in the US. I now live in Virginia.

Did you always want to be a writer? If not what did you want to be?
No. I was afraid I wouldn’t be good enough. But I’ve always been an avid reader and storyteller. I’ll read box labels if nothing else is available. When my husband and I were posted at the US Embassy in Berne, Switzerland and I was four hours from the nearest “Stars & Stripes” Bookstore, I became desperate. What else could I do but write my own between fixes?

When did you first consider yourself as a "writer"?
When I finished my first  manuscript after nine months of labor.

What is the name of your latest book, and if you had to summarise it in less than 24 words what would you say?
The most recent book released is ABSOLUTION (Warriors for Light, Book 3). “He did the unforgivable. Druid Lucan Woods killed his surrogate father and best friend for the greater good, but can love heal him?”

Who is your publisher? or do you self-publish?
As Terry Campbell and Alyssa Lyons, I’m published by small presses. However, as LJ DeLeon, I’m an indie author. I choose this route because it gives me more freedom. The books in the Warriors for Light series have large casts of characters. While the majority of the scenes are with the hero and heroine, some of the scenes are in secondary characters points of view. Life doesn’t happen in a vacuum and neither does the war between the Dark and Light or love.

How long does it usually take you to write a book, from the original idea to finishing writing it? Unlike when I started back in the Dark ages, it now takes me about three months to finish a book. When I got the idea for the Warriors series, I plotted out the entire series and each book and also created a series “bible” about the characters, storyline, and the worlds within the series.

What genre would you place your books into?
I love writing cross genre books. Warriors fits into action adventure, urban fantasy, thriller, romance.

What made you decide to write that genre of book?
I love writing about stories I can’t get enough of as a reader.

Do you have anybody read your books and give you reviews before you officially release them? ie. Your partner, children, friends, reviewers you know?
My reviews come from blog reviewers, review sites, and readers. However, I use beta readers—two are friends—as critique partners. I also have beta readers. Then the books are sent to two editors. The first line edits. After I correct any problems discovered, I send it to the second one for copy-editing. Unfortunately, even with numerous eyes reading my work, sometimes errors slip through. When that happens, I always appreciate a note from a fan, because I will correct the problem and upload a corrected version.

What made you decide to write that genre of book?
I had co-written and been published for a number of years under a pen name then took a hiatus. Two years ago, I decided to write both solo and what I loved to read—a series that was an action adventure/urban fantasy romance with multiple subplots, some of which would continue throughout the series.

Do you have a favourite out of the books you have written? If so why is it your favourite?
For me as a writer, my books are like my children. I love them all, but each in a different way. Strangely, the  easiest to write aren’t always the most lovable.

Do you have a favourite character from your books? and why are they your favourite?
My favorites, hmm. I really like Major Steve Taylor, the hero in Dragon Child. I also adore Fritz—the gargoyle, plus Sabina and Azreal. Their interplay and Sabina’s character are just plain fun. These three characters are in almost all the books.

If you had to choose to be one of your characters in your book/books which would you be? and why?
I’d be Deva. She’s the leader and the whole series revolves around her, plus I’m bossy. Just ask any of my friends.

Would you ever ask a reviewer to change their review if it was not all positive about your book/books?
Never! I might be gutted, but would stay silent. A review should be the reader’s or reviewer’s honest opinion of the book. If I sent the book to the reviewer, I always thank them.

How do you come up with the Title and Cover Designs for your book/books? Who designed the Cover of your books?
I’m not sure how I came up with them, but each of the books is already titled. When the Warriors series came to me—okay in a dream—I knew each book and the title. Most of them deal with the heroine.

What do you think makes a book a really good/bestseller?
LOL! I wish I knew. As an indie, I think becoming a bestseller is part luck, timing, and getting enough readers to discover your book when it first comes out. For me to find a book a good read requires good character development, characters who suck me in and aren’t black or white, but shades of gray, even those who fight for the Light.

Have you ever suffered from a "writer's block"? What did you do to get past the "block"?
It isn’t true writer’s block so much as not having my story plotted correctly or have gone astray with my characters. To get past it, I go back to when the story last worked and look at what’s happened from that point forward. Usually the problem is the scene is written in the wrong character’s point of view.

What do you do to unwind and relax?
Reading is one of my greatest forms of relaxation. I love movies and taking long walks.

Are there any hidden messages or morals contained in your books? (Morals as in like Aesops Fables type of "The moral of this story is..")
I don’t have anything hidden. One of the key messages in my books is that for good to triumph over evil, it must be very, very careful. Also, none of my characters, as in life, are all good or all evil, including the Dark Lord. Well, Senator Carlson is almost all evil, he’s worse than the Dark Lord. Another message is how easily we humans fear something or someone who is different.

Which format of book do you prefer, ebook, hardback, or paperback?
I used to love paperback—then my son gave me a Kindle. From that day forward I became a Kindle junkie. Readers be warned, it’s addictive. To stay solvent, I now buy an Amazon gift card on the first of each month. That way I don’t overspend. I’m very weak when it comes to books. Another great side benefit is my husband no longer sees evidence of my addiction to books, plus I’d have no place to put them.

Do you think children at schools these days are encouraged enough to read? and/or do Imaginative writing?
Because of standardized testing, I fear students read less and aren’t taught to write creatively unless it falls under the test.

What are you currently reading? Are you enjoying it? What format is it? (ebook, hardback or paperback)
Over the past year, all the books I’ve read have been Kindle editions. I’m an eclectic reader. I’m currently reading BRAINRUSH II, The Enemy of My Enemy, by Richard Bard.

Did you read a lot at school and write lots of stories or is being a writer something newer in your life?
Reading was and is my passion. As a teenager I’d do my homework then read a book. Later, after working for the CIA, I’d joke that writing intelligence reports prepared me to write fantasy. Not true. Okay, not completely true. I started writing when posted in Berne, Switzerland. I couldn’t get enough books, so I decided why not write one myself? The book A Wrinkle in Time by Madeleine L’Engle, authors Isaac Asimov, Arthur C. Clarke, and host of others have delighted me over the years and paved the way to thinking outside the box, which in my former and current profession proved invaluable.

Are there any New Authors you are interested in for us to watch out for? and Why should we watch out for them?
There are a number who write in a variety of genres. KH LeMoyne, LW Herndon, Richard Brad, Trish McCallan, Jack Silkstone, Mary Abshire.

Is there anything in your book/books you would change now if you could and what would it be?
I’m always spotting something to correct, even when two editors have gone through it. The only reason they ever are published is my friends threaten to not speak to me if I change one more thing.

What piece of advice would you give to a new writer?
Don’t give up. I still take workshops to polish my skills. If you’re like me and write cross genre with multiple characters, consider small press or self-publishing. However, if you self-publish don’t think you can do it all yourself. Be sure to hire an editor and if you aren’t an artist, a graphic artist. If you receive a rejection, don’t give up. You fail only if you don’t try or stop moving forward.