MY JOURNEY AS A COMBAT MEDIC BY PATRICK THIBEAULT 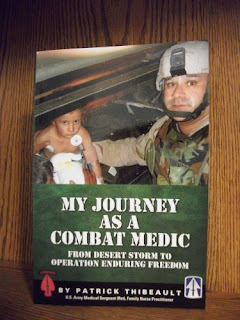 MY JOURNEY AS A COMBAT MEDIC:
From Desert Storm to
Operation Enduring Freedom
by
Patrick Thibeault
US Army Medical Sergeant (Ret) & Family Nurse Practitioner
Combat Medics are the unsung heroes of war. Hollywood prefers to focus on the glamour of Special Operations units or the spectacle of major battles. Combat Medics seldom make the headlines. Yet without them, hundreds of thousands of soldiers and innocent civilians alike would die on the battlefield, never again to see their friends and families and country.
My Journey As A Combat Medic: From Desert Storm to Operation Enduring Freedom (IBJ Book Publishing, $17.00, October 2011) by Patrick Thibeault offers a compelling, insider’s account of what it is like to be a Combat Medic in time of war. Thibeault narrates the harrowing moments Combat Medics endure as they courageously rush into danger to save wounded soldiers and civilians, their tender compassion in the face of brutality and violence, and their unswerving dedication to making sure they accomplish their mission and take care of the wounded.
“There is no job like that of an Army medic,” says Thibeault “You will travel to places and see things that others can only dream about. It is not an easy job, but it is a rewarding one. The rewards are not badges, ribbons, or bonus money; the rewards come from the good feeling you get from healing people. You will learn new skills on the battlefield that doctors are not taught in medical school yet. You will experience the highs when you save a live. You will experience the lowest of lows when someone dies on you.”
Among the many topics Thibeault can discuss include:
· His experiences working in Task Force Phoenix helping to train a deployable Afghan army that will take over as American troops withdraw.
· Discover what it takes to be a top-notch Combat Medic. The training is long and rigorous. The Combat Medic must constantly prepare for the worst. To do so, he or she must not only know what to do in the heat of battlefield but also stay mentally and physically fit on and off the battlefield.
· Advice for those who aspire to become Combat Medics themselves one day.
· The truth about Post-Traumatic Stress Syndrome (PTSD) and how it affects veterans in particular. Learn why conventional treatments for it don’t always work for those subjected too long to the stresses of the battlefield.
· The unique bonds infantry and communication soldiers forge with combat medics.
· Growing up as a Army brat travelling around the world during the Cold War era
“Bin Laden is dead, Al Qaeda is in shambles, and the Taliban is weak, but we still have American fighting soldiers in Afghanistan ,” says Thibeault, who spent one year in Afghanistan . “The nation of Afghanistan needs infrastructure so people can have jobs and provide for their families. The Taliban took power in the first place because of the instability in Afghanistan . We want to end the war successfully. Ultimately the people of Afghanistan have to take the lead in this; otherwise there is no victory, regardless of definition. Victory in Afghanistan to me would mean a stable government, even with corruption that comes with it. Our enemies have been defeated but is it our job to build this nation?”
Amid the violence of war and the untold suffering it leaves in its wake, the Combat Medic’s humanity and compassion emerges as a bright beacon of hope. My Journey as a Combat Medic: from Desert Storm to Operation Enduring Freedom is a fascinating read that will entertain as well as educate readers about a facet of war that is far too often overlooked.

About the Author
Patrick Thibeault was a medical career soldier for 20 years. He fought in Operations Desert Shield and Desert Storm in 1990 and 1991 serving with the 3rd Battalion, 160th Special Operations Aviation Regiment (Airborne) and was sent to Afghanistan with the 76th Infantry Brigade as part of Task Force Phoenix in 2004 and 2005. He retired from the Army National Guard in January 2011. Among his many awards and designations are the Meritorious Service Medal, the Air Medal, the Combat Medic Badge 2ND Award, Expert Field Medical Badge, Crewmember aviation wings and the parachute badge. He holds a Master’s Degree and is a board certified Family Nurse Practitioner and is certified as an Emergency Medical Technician. He lives inIndianapolis, Indiana with his wife, a dog, and two cats. His website is www.armycombatmedic.com and can be reached at 219 765 9141 .