REVIEW - THE EDGE OF ANARCHY - EDGE OF COLLAPSE BY KYLA STONE 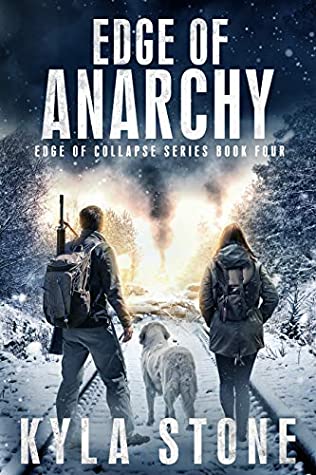 BLURB from Goodreads
The killing cold takes its toll. After battling blizzards, hypothermia, and hundreds of miles of dangerous wilderness, Hannah must risk everything to fight for the people she loves.

REVIEW
The book starts out with Quinn & Milo out walking in the extra thick and heavy snow. Even after all both of them have been through they can’t seem to escape trouble or seeing things they perhaps shouldn’t. They are in the Winter Haven area that Milo is living with his father, Noah, the Chief of Police live. Those that live at Winter Haven have been assigned their houses by Rosamund, as the usual occupants aren’t staying in them as they were more holiday homes. Winter Haven is quite “new age” in that they have solar power which of course means showers, hot water, better cooking facilities and much easier living conditions too. Anyone living at Winter Haven is considered lucky and most fortunate by those who don’t live there. So, its not really surprising when some of the Fall Creek residents decide they should have one of these large, all modern conveniences, solar powered homes for themselves. The Winter Haven resident they choose to oust is the community bank manager Darryl Wiggins. Without going into much detail there is a scuffle going on and a couple of Militia Members, Sebastian Desoto (Mattias Sutter’s second in command) & James Luther. The same two men who in Quinn’s opinion had barged into her grandmother Molly’s home and stolen her canned and preserved foods. Despite being told to be careful around these men when Quinn sees them shooting those who were attempting to take Darryl’s home, she literally flashes back to when their leader Mattias Sutter shot her mother. When Milo runs towards the men shouting for them to stop shooting, Quinn cannot help but become involved. The action forced by Milo involving himself in the action, puts an even bigger target on Quinns back than she had before in the eyes of the Militia’s second in command Desoto. Quinn isn’t the only one with a target on her back either, as Liam finds himself in danger, though its nothing he can’t handle, it’s the fact that puts others around him in danger too that irks him into planning some sort of action. Initially he wants to walk away but when it becomes clear his new friends intend to fight back, he agrees to stay and help in the fight.

At just 10% into the Edge of Anarchy I found that I had easily slipped back into the harsh new reality the characters are living in and the new situations they were coping with. I enjoyed continuing to adore the great characters I had come to love so far, such as Hannah, Liam, Quin, Milo and Molly (& Ghost of course). This book also has those characters that you “love to hate” like Sutter and most of his men. Then there’s the characters that I initially felt okay about, such as the Superintendent Rosamund Sinclair who has been increasingly showing a rather darker, underhand side of herself and I even found myself doubting Noah who I had adored earlier in the series. I just don’t like who he is becoming now he is Chief of Police and seems firmly set under Rosamund’s steely grip and influence! Edge of Anarchy felt even more fast paced and so quick to read. Had I had the time to sit I just know I would have read it in one go!!

My immediate thoughts upon finishing reading this book were Wow! Amaaaazing! Action packed from the beginning to the end! What “side” will Noah choose? Will Noah and his wife Hannah even be able to rekindle whatever love was left in their marriage, or has too much time passed? Hannah has changed both physically & mentally. Can everyone else come to terms with and accept those changes? Who is the right man for Hannah? I know who I want her to be with!

To sum up I have tried really hard not to give away spoilers in this review which is why it will probably come across as less detailed, maybe vague review. If you have read the series so far then Edge of Anarchy is an absolute must read. If you haven’t read any of the series so far you need to start it now! I am really looking forward to the next book already too!