REVIEW - THE LIAR AMONG CREATURES - HOWL FOR THE DAMNED BY D. FISCHER 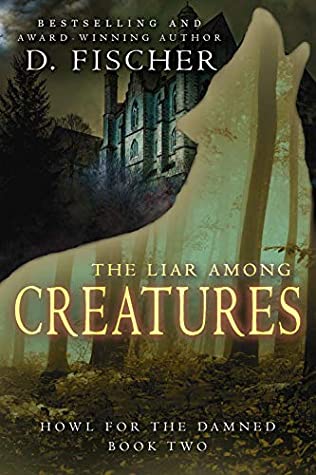 BLURB from Goodreads
Uncertainty is measured in lies.

Balancing loyalties and desires isn’t easy, but Jinx Whitethorn is determined to try. She finally understands what she is and the secrets that bind her fate, but she still has questions. Jinx turns to the only living relative she has left on her father’s side. It goes against every tribe fable Kaya Whitethorn had been told as a child, but she agrees to help her skinwalker niece.Possessing both a combination of shaman and witch magic, Jinx needs to learn how to control her power to defend the people she loves, and her father’s pendant. A pendant that harnesses the wolf souls of the cursed Bane Pack shifters.Meanwhile, Jacob looks into a mole inside the pack. Someone’s feeding the Bane information, and he’s determined to find the traitor among them. He’ll protect the woman he loves, no matter the cost.

I have to comment on the cover for this book as I think it fits it so well. I love the continuity of the howling wolf on the cover and the fact it is kind of see through perhaps representing the animal that Jinx turns into. Then there is the forest background that features within the book as it is in the grounds of the home of the Riva Pack. These covers represent the books extremely well and certainly do their job very well, as I would certainly pick them up in a book store to learn more about them.

Now it’s kind of difficult to speak about Jinx and not reveal what she is in this book, so if you haven’t read book one you may want to stop reading here! So the identity of Jinx’ father is now known and the Riva pack is searching for his relatives in the hope there will be someone to help Jinx understand, handle and control her transitions into her spirit animal, which happens to be a stunning white wolf, that Alpha Jacob’s wolf is rapidly falling in lust and love with.

A relative is found and it turns out she is Jinx’ father Adriel’s sister, Kaya. As it is still considered dangerous because the Bane wolves are still wanting to capture Jinx to force her to remove their curse, Jacob’s second in command Rex collects Kaya and brings her into the home of the Riva Pack.
Kaya reveals more details about Adriel to Jinx and also has regular training sessions with Jinx to help her control her changing more whilst remaining conscious.

Sadly, when secrets about the whereabouts and movements on pack land appear to be leaked it seems like Jacob has a traitor in the camp. Whilst Kaya demands all of her niece’s attention, pitting her against Damien, one of the toughest wolves in the pack, and really pushing Jinx to her limits. Later whilst on guard duty patrolling the Riva Pack home Damien is attacked, meaning there definitely is someone leaking pack information to outsiders, but how did these outsiders get on pack land evading detection long enough to attack Damien one of the strongest pack members both in and out of his wolf form? It is revealed that the sensation and sounds that Jinx feels/hears from the wolf pendant she has that belonged to her father are the voices of the Bane Pack wolves, but what did the Bane pack do that made Adriel remove their wolves and trap them in the pendant? And could anyone other than Adriel or his daughter remove the curse, and free the wolves?

Favourite characters in this book were once again Jinx and Jacob and their cute, but passionate relationship. I love the way Jacob wants to give Jinx the option to walk away after they sort out the “Bane Pack problem” as it is referred to. Jacob has felt the mate bond pull strongly, but as Jinx is fairly new to wolf pack customs, he forces himself to hold back, which in turn worries Jinx that Jacob doesn’t want her as she is not a usual wolf shifter, more of a spirit wolf shifter.
Both Jacob and Jinx want “more”, “now” from each other but neither thinks the other wants to commit. It’s a classic misunderstanding of unsaid words and unrevealed feelings, though it is obvious for everyone around them that they are quite literally made for each other, like two halves of a coin.
The other relationship that’s “going strongly” in this book is the one between Sara, Jinx best friend from the Lotus Coven, who is usually the perfect witch example of “love them & leave them” is living at the Riva Pack home and is sleeping with Cinderson, Riva Wolf and owner of BeDeviled also a “love them & leave them” type. However, the two of them together seems to becoming a regular. In fact, there’s an embarrassing scene for Jinx when she walks into Cinderson’s bedroom and see’s both him and her friend Sara naked in bed! Which is quite funny really as you would think that the whole nudity thing could be “old hat” to Jinx now she has been living with the Riva Wolf pack for such a long time.

I honestly slipped effortlessly back into this book with it great different types of paranormal characters I think it will appeal to a wide range of readers. At around three quarters of the way through the book I was like, Oh...wow I think I know who is giving the Bane pack information and help and they are quite literally in plain sight right under the noses of Jacob & Jinx......Was Damien attacked because of his similar wolf colouring to Jacob? And was it the mole/traitor that attacked him alone or did they have Bane pack help? Why did Adriel curse the Bane pack? Could it be something to do with his sister?" As you can tell I had lots of questions popping up in my head as I was reading The Liar Among Creatures. I love a book that keeps you thinking and asking questions. As well as the well thought out, skilfully created characters and the amazing action depicted within the book, there are detailed descriptions of the surrounding woods, as well as the inside of the pack home that make the scenery easy to imagine.

My immediate thoughts upon finishing this book were Oh wow! Amazing! It felt great that I had guessed the mole/traitor too, even though at one point in the book I felt like shouting who it was at the characters lol. I was also left with even more questions, that may or may not be answered in the next book, such as, Does Jinx' mum have any more information on the situation between the Bane pack and Adriel that may help? When will things settle down long enough for Jinx & Jacob to start/complete their mate bond? Will there be a future for Cinder & Sara's relationship too with him shifter & her a witch? (I really hope so, and she doesn’t seem the type to be forced away from someone she may love by rules, no matter how ancient they are!) Also are the Bane pack still coming after Jinx? I want to read mooore noooow!

So, to sum up. . Amaaaazing, action packed, loads of potential for future books! Definitely looking forward to more!