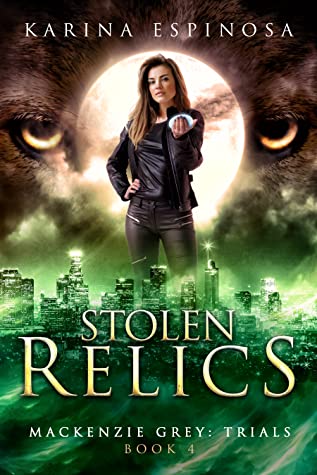 BLURB from Goodreads
Are all the fairy tales real?Mackenzie Grey is back at the Supernatural Investigative Unit and her first big case is not what she expects. Tasked to find stolen relics that are attached to a legend even Kenz herself is having a hard time believing. This leads to a target getting put on her back, and she finds help from an unexpected enemy.Unfortunately, the SIU isn’t all Kenz has to worry about. When Alexander finds out about Ollie, he takes the first flight to New York City to spend time with his daughter, but he comes with news of his own that will change Mackenzie’s world completely.Will Mackenzie find the thief in time before the bounty on her head is collected? And will her life be altered after Alexander’s proclamation? Find out in Stolen Relics.

Once again, another great cover, that fits well with both the Trials and Originals Series. The background of the night sky, with the full moon making it mysterious, the haunting eyes of the wolf and Mackenzie Grey front and centre where she always is! Perfect! This cover, in fact all the series covers do their job well, as the covers would make me want to pick up the books to learn more about them. The image of Mackenzie, feminine, yet ready for action in those jeans and the leather jacket, hinting at the kick butt female her character is.

I found that I easily slipped right back into the Mackenzie Grey world and all it entails with no problems what so ever. I don’t re-read books so I rely on what I remember from previous books. This time Mackenzie and the Special Investigations Bureau are called to a night club called The Third Eye, that is run by a supernatural by the name of Maximos Limogiannis , though when they turn up, the owner doesn’t appreciate their attendance at all. In fact, he is quite rude to both Mackenzie and Michaels. Maximos is arrested, however it is rumoured that Maxiomos has “friends in high places” at the SIU, and it becomes apparent this is true when Michaels and Mackenzie are summoned into Lieutenant Briggs office and told to let Maximos go now! We meet a new supernatural called a Gemini in this book and it can replicate itself which means it proves to be a difficult opponent in a fight. Also, in this book the name of the mystery man from the last book is revealed, though we still don’t know if this man represents good or evil really.

It turns out that Mackenzie has a bounty on her head, not that it phases her in any way, she still intends on doing her SIU job and going to places alone much to the irritation of Bash, Alexander and Ranulf. The SIU is contacted about other attempted burglaries, which they immediately connect to the attempted burglary at The Third Eye, it seems someone somewhere is stealing and collecting relics. If this person, or group manage to obtain them all, it would make them both powerful and dangerous. It is hinted at many times throughout the book that these relics are from the times of the Norse Gods, meaning the magic they hold is both powerful and ancient too. It’s not long before whoever had them removed from the case at The Third Eye wants them back on the case. So, to say Mackenzie is busy is somewhat of an understatement. Whilst all this is going on at work, she is still struggling to come to terms with what she did to her brother in the last book. Mackenzie knows she needs to tell her father, King Alexander of the Lycans but dreads the moment thinking he will be both annoyed and disappointed by her actions. When her secret “mistake” is revealed Mackenzie is shocked by her father’s reaction. Mackenzie is busy with her brother Ollie and helping him cope with his new life and despite being Bash’s mate doesn’t take it very well when Bash initiates Ollie into the Brooklyn Pack. When Alexander visits there is a rather awkward dinner where he meets the parents that brought Mackenzie up as their daughter. Though Alexander easily flatters Mackenzie’s mum, her dad takes much more to win him over. The mysterious man that Mackenzie met in the last book finally gives her his name Ulfur. He seems to appear and be there when she most needs him….well most of the time. Of course, there’s some Mackenzie and Bash sections with some tough decisions made about their futures, from their relationship status to where they will live when Mackenzie has to take over from her father in Scotland. When Mackenzie spends time with her father, she realises her time of being free and able to do exactly as she wishes is coming to an end earlier than she thought it would. It is also revealed that there are Lycans and other Paranormals can and probably will challenge her being the Queen of Lycans.

I really enjoyed looking at Mackenzie and her relationships with different people. The way Mackenzie feels responsible, and extremely protective of her brother Ollie’s predicament and makes sure to be there for him during his first change. Despite the extra strength he has gained with his new abilities she still seems to look at him as “breakable” and as someone she needs to look out for. With Mackenzie and her father King Alexander, we see a softer side, a more parent, child relationship in this book. When King Alexander dresses casually and they get to go out and eat pizza, like “normal” people do. You really get to witness the family love between them in this book. There are some big changes ahead for Mackenzie & Bash too! But I honestly cannot talk about those without giving anything away, other than saying…I can’t wait!! I also loved that Sterling Rose, a Luna got to fight for a chance at being a Captain! Though it turns out Mackenzie can’t resist shouting hints and tips from the side lines irritating and riling the male lycans, so much, Bash has to warn her she can only stay and watch the other rounds of fighting if she promises to be quiet. Both Bash and Mackenzie are sharing more with each other but still have things that they omit telling the other which we see once again in this book. I also loved the information around the relics as it brought Norse Mythology into the mix too. So, so much going on in this book!

My immediate thoughts upon finishing this book were, Wow! as amazingly addictive reading as ever! And hmmm, is Ulfur who I think he could be? Great to have more between Kenzie & Alexander! Looking forward to the 'human wedding's between Kenz & Bash, I'm sure Amy will be helping her out with those arrangements. Can hardly wait for more! And I did my best to read this one slowly too!! Loved it, love Kenz & Bash, Jackson & Amy ...mmm what about Ollie & Sterling Rose perhaps?? I have soooo many questions?

To sum up I love revisiting this world and reading about the latest problems Mackenzie is dealing with, whilst catching up on her relationship with Bash, her family and her work mates at the SIU. I love the writing style, and feel like I read the books really quickly, to a point that I consciously made an effort to read this book slower than normal and enjoy it even more. Think about what I have read and ponder what may be coming next for Mackenzie. As always as soon as I finished reading this book, I was ready to read more as soon as possible. So, I guess the countdown to the next book begins!