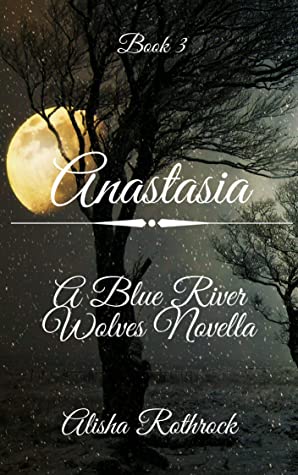 BLURB from Goodreads
She was only trying to help. She never meant for everything to spiral so spectacularly sideways so fast. Old acquaintances and new troubles come for Ana, Damon, and Lena. A plea for help leads to heartbreak, betrayal, and a trip back to Blue River. Ana must dig down deep and find the strength she never knew she had in order to set things right with Damon and Lena. With so many lives hanging in the balance, she can only hope that she can find her courage and strength before it is too late to save them.

REVIEW
As soon as I knew this was going to be available, I wanted, and needed to read it. After really enjoying Lena, and Damon and seeing the title of Anastasia on this one I knew we were about to learn more about Ana Abernathy, daughter of the present Blue River Wolves Alpha. In the last novella Ana had contacted her former best friend Cheryl back in the Blue River Wolves pack to try to find out what is going on in the pack.

Once again, the cover matches the previous novella’s and I wonder if the novella will be put together as a whole book using this cover. The cover would make me pick the book up to learn more if it was on a book store shelf, so it does its job well.

It took me a while to get used to the changing time frames, it felt a tad confusing as I was reading alternating orders of events such as a character called Cheryl has spoken to Lena & Damon in one chapter which is from Damon/Lena point of view, but a later chapter from Ana’s point of view, Ana hasn't yet set off with Cheryl to head to warn Damon & Lena. Having said that I soon got into the flow of the book, and quickly became captivated, in fact, I read the novella in just one go!

I loved the way that the human side and wolf side talk, argue and reason with each other as if they are separate beings rather than being two sides to one being. The way wolf side Sierra tries to warn Ana that something is wrong with her supposed secret meeting with Cheryl. Then there’s the way wolf side Cane attempts to bully Damon into pushing Lena and her wolf Serlida into making a quicker decision about their possible mate bond. I honestly adore the relationship between Nanny and Lena, it’s a motherly one mixed with mutual respect too. I thoroughly enjoyed the reveal of Nanny’s past and her true home pack. I can’t wait to see Zane’s reaction when he sees her again. I appreciated learning about the Opal Crescent Pack background story too as it gave more insight on the character of Nanny. I predict an uncomfortable moment or two that will probably lead Zane into a fit of rage when he sees she is the one that has been helping Lena all this time. I reckon he is going to beyond fury when it is revealed his son is her true mate too! There are lots of revelations to happen in the next novella. Also, I am anxious to learn how prophetic Ana’s dream is going to be where she saw the fight between Lena and Zane with an unknown wolf about to pounce. Who is this wolf that Ana doesn’t recognise? Whose side are they on? If they are against Lena will they do her harm? Can this “intruder” be defeated? I also have that sinking feeling that we may lose a much-loved character when this whole fight is going on…but who will it be?

There is so much going on in this book, there’s the love/true mate bond going on between Lena and Damon, Ana captured and being beaten by her own father, the Blue River Wolves who suddenly swear allegiance to Lena, but perhaps not all of them are to be trusted. I suppose we will find out when the actual fighting begins as to who is truly on which side of the battle. Ana feels a little jealous of her brother, Damon and Lena in this book, but when Lena gives her an important job with a lot of responsibility that seems to make her feel somewhat better. I did have an inkling about Ana, that perhaps she could be persuaded, or rather coerced with violence to switch to his side of the future battle. Ana muses about meeting her own future mate, so perhaps that could make her decision easier or harder in the future, maybe the mystery wolf she saw in her dream/vision could be her future mate? This novella answered most of my questions from the previous novella’s but has me asking so many more! As a great book in a series should!

I would recommend this as a great clean age appropriate read for a YA audience though I am not in the YA age bracket myself I thoroughly enjoyed it. It reminds me a little of Emerald Barnes Knights Academy Series though that has other types of paranormal beings in it and this one is all werewolf shifter. I could seriously go on and on about this book!

My three immediate thoughts upon finishing this novella were that, one, I loved it, two, Oh, wow what a place to leave the action, and finally three, when can I read more!!

To sum up I really enjoyed this novella, I adore the characters, and the world they exist in, created by the author. I am certainly looking forward to reading the next novella, when I guess you could say the future of the Blue River pack will be decided one way or the other!