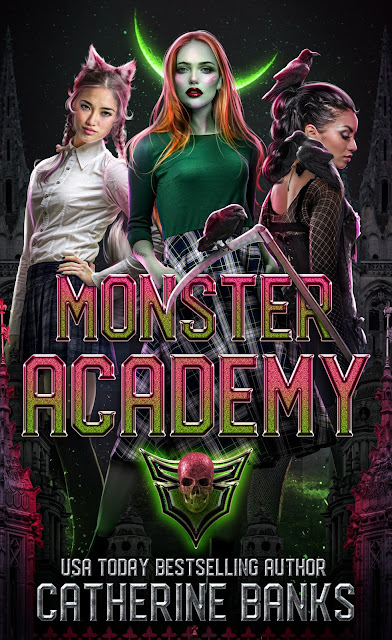 BLURB supplied by Xpresso Book Tours
They thought they’d have it easy being monster elites, but these three best friends still have to deal with pop quizzes, crushes, and even worse…humans.
Frances Stein, Loralie Reaper, and Tsukiko Okami just want to play games and relax after their classes. Any hopes of chilling out, however, are destroyed when humans attack Monster Academy and try to use the students for ransom.
In order to defeat the humans and protect their fellow monsters, they must work side by side with their crushes without giving away their secrets. Of course, that would be a lot easier if they were able to stick together, but in a move that betrays insider knowledge, the BFFs are separated.
By tapping into their monstrous powers and working with their crushes, they will open their hearts and unlock abilities long thought dead. But will it be enough to save all of monster-kind? It’s going to be one hell of a year at Monster Academy.

EXCERPT
“Why do you three look so glum? Not get any presents?” Norma asked as she slid into her seat across the room.

“Don’t even acknowledge her,” I whispered.

“Doesn’t surprise me that no one wanted to give you a gift after the way you treated the Evil Three,” she added.

I didn’t even need to ask who the Evil Three were. It was obviously the guys. The girls liked to give them ridiculous names as they claimed to be their fan club or something else idiotic.

“I’m glad you showed your true colors. Now someone actually deserving of them can get them. Your spell is gone and we can finally make our move,” Norma purred.

Dante came into the classroom, and I immediately dropped my eyes to look at the desk.

I lifted my eyes, but kept my head still, so I could use my hair as a shield to watch them.

She held out a red wrapped box to Dante.

He glanced at me, our eyes meeting even through my veil of hair, and he took the box from her. “Thanks.”

I dropped my eyes again, tears burning them.

No. I would not cry.

I had no reason to cry.

“You sure I can’t just tear one of her arms off?” Loralie whispered. "She doesn’t need both of them."

I sighed. “It would make me feel better.”

“Not today,” Tsukiko said. “Maybe some day, but you can’t tear an arm off today.”

I let out a short, soft laugh, but it was cut short when Norma laughed at something Dante said.

Hopefully, I could make it that long. 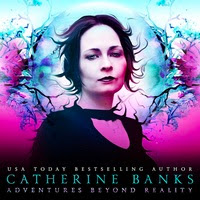 Catherine Banks is a USA Today Bestselling fantasy author who writes in several fantasy subgenres under two pseudonyms. She began writing fiction at only four years old and finished her first full-length novel at the age of fifteen. She is married to her soulmate and best friend, Avery, who she has two amazing children with. After her full-time job, she reads books, plays video games, and watches anime shows and movies with her family to relax. Although she has lived in Northern California her entire life, she dreams of traveling around the world. Catherine is also C.E.O. of Turbo Kitten Industries™, a company with many hats including being a book publisher and Etsy store full of nerdy fun.
AUTHOR LINKS
Website
Goodreads
Facebook
Twitter
Instagram
Newsletter