PROMOTION - MEMOIRS OF A MAN BY ANON

MEMOIRS OF A MAN was written by a group of stay-at-home Dads who wanted to tell the comical truth of their existence. The names have been changed to protect the innocent, but to get revenge on the guilty everything else has been left untouched.
Based on a very true story, it should be read by every father, every potential father, and any woman who wants to know what really goes on when baby is left with Daddy. 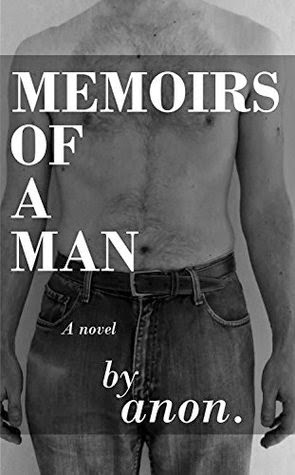 BLURB from Goodreads
Paul Rogers is not a good man, but he’s not a bad man either. He’s a man who, due to a high-earning wife and company lay-offs, finds himself at home looking after his baby son. His days as a rare and angry male carer take him through swimming pools full of naked mothers to lesbian support groups, telling lies to ex-colleagues about Filipino nannies and leaving obscene comments on parenting blogs. Throughout it all, Paul’s life lurches like a badly-maintained stroller towards a devastating and liberating conclusion: his baby’s first day in daycare.

“We should write a book about this.”
It’s a common enough phrase, probably said after a few drinks and too much reminiscing.  Usually it stops there, but can it actually be done?  Can a diverse group of people put together a novel – not a collection, not a compilation, a coherent novel?  Yes!  And (as always) but…
In early 2013 a group of us met online in a dark corner of a parenting forum website.  We were all recent dads, and for various reasons we all stayed at home to look after our kids.  For some it was choice, for others necessity, but we had plenty of shared experiences and we wanted to talk about them.  Crucially, none of us lived anywhere that had many (or any!) other dads doing what we were.
There was an equally crucial aspect: a lot of the things we went through were hilarious.  Call it being a fish-out-of-water, call it being a comically small minority, but everyone had at least one crazy and/or embarrassing story.  One dad had walked into the “family” changing room at the local pool and found it full of naked mothers.  Another wasn’t allowed to adopt until a social worker had watched him change a diaper, making him describe what he was doing and taking notes as he did.  He had to ask a friend to borrow a baby to make this possible.
Then there were the weird comments and strange diversions.  “Do you ever narrate the day in Clint Eastwood’s voice in your head, to make it less boring?” someone asked.  Um… no, was the general response, but it was a funny idea.  “It’s easier to find a lesbian mothers’ support group than one for stay-at-home-dads.  I think I’m going to go along,” opined another.
So when the “we should write a book” comment gained momentum, we had a great store of real world tales and what-ifs that we could work with.
Then came the organization bit.  We decided the best way was to treat the whole thing like a “writers’ room” they might have on a TV comedy series.  We would work out what the overarching story should be and then parcel off the “episodes” for different people to write.  We realized we needed a single rewriter/polisher and a single editor to make sure the whole thing had consistency, and we drew up a contract to keep it legal, including how any profit might be split (it’s good to dream).
The overall plot was quickly decided; a few of us had kids who were shortly heading to daycare, and the qualms about that, from a male perspective, seemed a good story and a new perspective on a timeless parental experience.  We agreed details about our main characters, we picked stories and scenarios that would fit into all this, we sketched out what might go where, and then we doled it out to those who would do the writing.  We agreed it would be more fun, and more imaginative, if people wrote about experiences other than their own.
Yes, a lot of work to even get to a starting point!  No wonder most people do this alone.  All that bit was certainly the most difficult and the least enjoyable, and involved the most disagreements.  People who had misgivings mostly left here.  Being an online group probably made that easier than if this had all been “real world”, and there was nothing too dramatic, but it was disappointing that some didn’t want to be further involved.
We set deadlines for pieces to be in, and I think the general enthusiasm by all involved helped us to hit most of those.  It was then down to the editor and rewriter to work their magic.  Magic is the word!  When they were done we had, for the first time, something that could be called a “book”.  We gave ourselves a window for proofing and reviewing, and kept comments open to everyone about everything.  That was really helpful in shaping things too, but the editing team had to have the final say.  A dad that had done graphic design work made up a cover, and then a few days later (and it was days – that’s one of the best things about online publishing) we were up on Amazon.
The team aspect worked well here too.  One dad had been a website designer so took on that task, someone else is running the Twitter and Facebook accounts, and another (me!) is contacting bloggers like Sandra.  We agreed that we would not review the book ourselves on Amazon, despite the benefits of having a pre-made 5* insider fan base.  It would look pretty suspicious, and readers/Amazon can sniff out fake reviews… although, given their importance, the temptation remains.
Another plus?  We would publish anonymously.  We’re writing about personal things, and protecting our families’ privacy is paramount.  The flipside is that the shackles are off!  The book turned out a bit more shocking and honest than we anticipated (typical of when a group of men get together, some might judge), but we do think it’s hilarious.  Of course, it remains to be seen if a wider world agrees with our small, and not impartial, sounding board.
So next time someone near you says “we should write a book” agree with them and start!  This kind of thing can work, and it can keep up your motivation and make things a lot easier than struggling alone.  But I think you need to begin with a community that is already focused on one thing.  We didn’t decide randomly to write historical romance, we wrote about what we knew (that old chestnut!)  And the real heavy lifting is in the planning, and deciding who the buck stops with – get that right, even if it comes with some pain, and the rest should follow.


Finally, the experience of just getting something out there is the real triumph in all this.  Will anyone like our book?  Will it sell?  We really hope so, as we think it’s a great story that people will want to read.  But if someone says something nasty about it – and this is the Internet, so that’s going to happen – I can commiserate with my co-writers and a (virtual) beer.  Whatever comes of this, we’re now authors as well as online buddies and stay-at-home dads, and have enjoyed producing something we love.  It’s like a group of ten guys got together and made a baby!  Wow, there’s our next novel. . . . .

Hugh Stacey is one of the Authors within the Memoirs Of A Man, and the writer of the above Guest Post.
Posted by Jeanz xx at 13:00