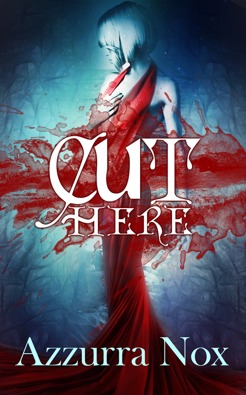 BLURB from Goodreads
Sixteen-year-old Lena Martin’s idyllic world shatters the night her mother dies due to a hit and run accident. Two years later, her dad relocates her from Italy to Los Angeles to help her put behind the time spent in a psychiatric ward following her mother’s death. But the move only proves to be a fatal mistake. Shortly after her arrival, the classmates of her new private school begin to commit suicide under mysterious circumstances after reading a cult book called Cut Here. Determined to unravel the mystery behind the suicides, she bands together with loner Jonathan Russe and outcast Hope Peters to figure out exactly what is happening, not realizing that this places them under a dangerous radar. During this same time, Lena falls for a mysterious and attractive guy named Michael, who is as equally disarming as he’s dangerous. As her attraction grows, so does the body count at St. Lucy Academy. Soon, Lena needs to decide whether to stay away from the guy she’s falling for, or to trust him. Is Michael behind the suicides, or is he the key that can unlock the mystery that can stop the bloodshed? Deceptions run high and Lena soon learns that nothing is what it seems.

What is your name, where were you born and where do you live now?
Azzurra Nox, and I was born in Catania, Sicily. I currently reside in the Los Angeles area.

How long have you been writing?, and who or what inspired you to write?
I've always written, since I was around six. But I never took it seriously till I was fourteen. Reading Anne Rice novels really inspired me in becoming a writer and trying to learn more about the craft of writing.

Where do you get your book plot ideas from?What/Who is your inspiration?
The one for CUT HERE was inspired by a nightmare I had in 2008. But in general, real life situations, music, and movies are all sources of inspiration for my writing.

Do you choose a title first, or write the book then choose the title?
In most instances, titles come to me after I've written the book. For the longest time, CUT HERE was saved on my laptop with the file name of “Angelus,” which is the word for angel in Latin. It wasn't until I was done with the book and editing it that I decided to name the novel after the book in the story that brings so much misfortune to the characters after reading it.

Do you have a favourite character from your books? and why are they your favourite?
I do. I've always rooted for the underdog, so I'm a huge fan of my character Hope Peters, a homeless girl who lives in a car with her Romanian gypsy grandmother, and has to try to survive high school life in a private prep school in Los Angeles. Initially, she seems like she's very weak, but she grows throughout the novel, CUT HERE, and ends up being a very vital character in helping destroy the evil force that's attacking her fellow classmates.

What do you do to unwind and relax?Do you have a hobby?
I love music, so going to concerts and dancing are two of my favourite things to do. But I also love reading a good book, especially if I'm really tired, it allows me to go on an adventure, even if I physically can't move a finger.

Have you ever based characters on people you know or based events on things that have happened to you?
Sure. Many times. Perhaps people won't exactly know someone is inspired by them, because all writers have a way of abstracting what they want from someone or a situation and creating a whole new world.

What is your favourite book and Why? Have you read it more than once?
The Picture of Dorian Gray from Oscar Wilde. I first read it when I was nine years old, cause the premise of a person never aging but their painting does instead, widely intrigued me at that age. Then I reread it again when I was eighteen and understood many of the social things I didn't when I was younger, and how much youth obsessed any culture and era has always been. I've reread the book countless times now, and it's still very modern. Today more so than ever before, people have all become a bit like Dorian with their obsession with Botox and anti-aging creams. If we could sell our souls for youth and beauty, I'm pretty sure celebrities would jump on that bandwagon pronto.

Did you have a favourite author as a child?
R.L. Stine was my absolute favourite author, growing up. My dad had signed me up with a Thriller Book Club, and they often featured books by R.L. Stine, and another time he signed me up for a Fear Street Book Club. I'm pretty sure that I mostly survived on the consumption of Stine books and watermelon Jolly Ranchers. Somehow they seemed to compliment one another quite well. If it hadn't been for those bookclubs, I probably never would've become such an avid reader, and writer.