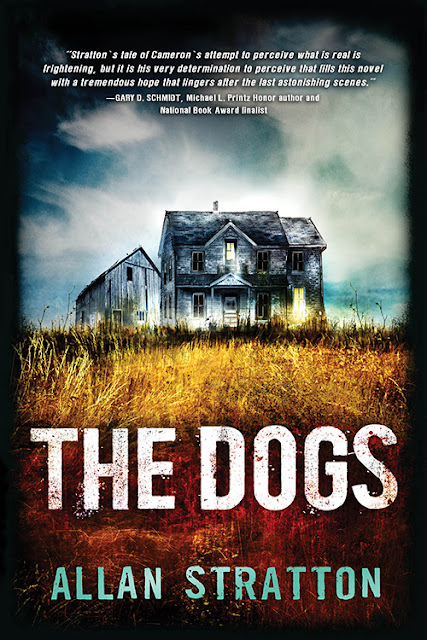 BLURB supplied by Sourcebooks
Constantly on the run from a dangerous father, Cameron’s used to pushing away the trauma of his past. But when his mother moves them to an old farmhouse in the middle of nowhere, he discovers that there are some things you can’t escape.

His new schoolmates taunt him about the bloodthirsty dogs that supposedly haunt the farm, and Cameron soon stumbles upon a child’s drawings in the cellar that depict a violent history. The line between reality and nightmare begins to blur as the house’s horrifying secrets mix with fragments of Cameron’s own memories—some best left forgotten.

Barnes&Noble
Books A Million
iBooks
Indigo
Indiebound
I go up to my bedroom. It’s at the top of the living-­room stairs, next to a small bathroom and near the big room over the kitchen. That’s the room Mom thought I’d pick, and I would have, except for the trapdoor in the ceiling. It’s sealed up with nails and paint. When I saw it, I asked Mom what she thought was up there.
“An attic.”
“Yeah, but what’s in it?” I pictured a dried-­up body, half eaten by mice. I mean, who seals up an empty attic? Anyway, that’s why I didn’t choose the big room. If I don’t see the hatch, it’s easier not to think about what’s on the other side.
The bedroom I picked came with an oak desk, a wooden chair, a night table with a lamp, and a metal-­frame bed. The mattress is new, unlike the wallpaper, which is stained and peeling along the seams near the window. Under the peels are layers of older wallpaper, one with little orange canaries on it.
The window over my desk is the one good thing about my room. Looking out, I can see the barn with the fields all around and the woods in the distance. At night, the stars and the glow of the porch-­lamp light up bits of the barn and the first row of cornstalks.
I start to do my homework. Pretty soon, though, I’m looking out the window, watching the stars come out and trying to forget my life. I wonder who all are staring up at the moon right now. Are they wondering the same thing?
Out of the corner of my eye, I catch something moving by the barn. When I look, it disappears. Wait. There it is again at the cornfield. Some movement, some thing.
I count to twenty. Nothing. I relax. Then—­did that stalk move? I turn off my light so whatever’s out there can’t see in.
It’s probably just a breeze.
Or Mr. Sinclair. Or Cody and his gang.
Don’t be nuts. If it’s anything, it’s an animal. A coyote or a dog.
The dogs. I close my curtains. If I don’t look out, whatever’s there will go away. But I can’t not look. I sneak a peek. Nothing. Wait. By the barn. Is that a boy?
I blink. The boy is gone.
My eyes scan the barn. There’s a missing board up in the loft area. The more I stare, the more I think I see the boy staring back at me from the shadows behind the hole. He’s maybe ten, very pale, and he’s wearing one of those old Davy Crockett hats with the raccoon tail hanging from the back. Are those freckles on his cheeks?
Don’t be crazy. The barn’s too far away to see stuff like that.
The face disappears. I stare till I see double. The face swims back into view.
This is too weird. I close my eyes and try to clear my head by thinking about the bus and the Cheerios between Benjie’s teeth. When I open my eyes, everything’s normal. There’s no face. Nothing. Just the night.
And that’s how it stays.
I close my curtains, get ready for bed, and crawl under the covers. I hate the way I scare myself. It’s always the same and it’s always stupid. And the scared-­er I get, the more I talk to myself, which is even stupider.
Besides, even if there was a boy in the barn, what’s scary about that? Maybe he just likes exploring places like I do. Still, it’s weird he’s on our property, especially so late. I wonder where he lives.
Who says he lives anywhere? Who says he’s real? What parents let a kid that young wander around at night?
Mom knocks on my door. “Cameron?”
“Yeah?”
“May I come in?”
“Sure.”
I know she wants to give me a good-­night hug, but I told her to stop it when I was twelve, so she just stands in the doorway. “I know you didn’t mean anything. You’ve had a hard day. I’m sorry I overreacted.”
I hate it when she’s all understanding. It makes me feel like an even bigger jerk. “That’s okay. Mom, I really amsorry.”
“I know.” She pauses. “’Night, then. I love you.”
I want to say the l-­word back, but I feel dumb, so I just say,
“You too.”
Mom closes the door. I go to turn off my lamp and get flashes of Mr. Sinclair and the dogs and the kid I maybe saw in the barn. What’s out there in the dark, circling the house when we’re asleep? What could be out there?
I leave the light on.

Praise for The Dogs:

“Stratton masterfully constructs a creepy gothic setting…A monstrous, stalking father, unhinging nightmares, a ghostly boy, wild dogs, and a moldy basement add creepy deliciousness to a murder mystery and tale of a boy who, in trying to solve a mystery, may just discover what a loving family might be. An engrossing blend of murder mystery and family story.” –Kirkus STARRED Review

"There’s fear aplenty in Allan Stratton’s The Dogs and a tantalizingly uncertain element of the supernatural… refreshingly like an old-fashioned mystery, but the passion and terror underlying (our hero's) own family give it emotional complexity and suspense." - Toronto Star

“A real page-turner... [The Dogs] stayed with me for days, author Allan Stratton having created an unsettled aura the likes of which Alfred Hitchcock and Stephen King routinely built into their work, too... Stratton’s depiction of setting and characters is masterful, and his ability to create tension and keep readers on edge is equally strong.” – Montreal Gazette

“A chilling tale of a mother and son on the run, from the author of the award-winning Chanda’s Secrets…Written in accessible prose, The Dogs manages to thrill while exploring the mindset of the victim in ways that are both insightful and affecting, artfully portraying permanent state of dread and a creeping self-doubt. This is an accomplished, gripping and thoughtful story, whose dramatic ending delivers on every level.” –The Guardian

“Brilliant, page-turning, and eerie. Had me guessing to the very end.” –Joseph Delaney, author of The Last Apprentice series.
“An Agatha Christie mystery novel on cocaine” –SLJ Teen Newsletter