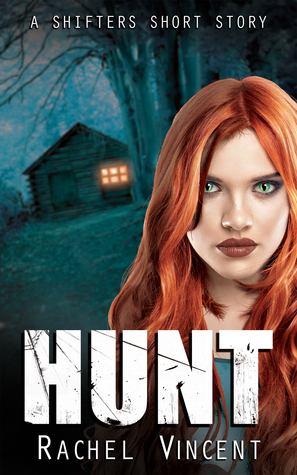 BLURB from Goodreads
It’s been more than four years since Abby Wade survived capture and torture by a quartet of rogue shifters. Back then she was a scared kid, just trying to survive.

Now Abby is all grown up, and if she’s learned anything from training with Faythe Sanders, the world’s first female Alpha, it’s that she can take care of herself—and anyone else who comes along. So when her college roommate is abducted from a campsite deep in the Appalachian woods, Abby knows exactly how to get her back…

The rules of the hunt are simple. Kill or be killed.

Abby Wade is not ready to die.

INITIAL THOUGHTS
I heard about this novella either via someone’s blog or Goodreads. This novella is a short story that bridges Rachel Vincent’s Shifter’s Series published by Mira books and her indie published new series called Wildcat’s. As I totally fell in love with the Shifter’s Series, and I had just read Lion’s share Bk#1 in the Wildcat’s series I was looking forward to this novella explaining exactly what had happened in the “incident” that happened after Alpha's, Shifters Series Bk#5 and Wildcats Series Bk#1 Lion’s Share. I expected the novella to answer a few questions I had asked during reading Lion’s Share.

REVIEW
I purchased this novella from Amazon UK and it was actually “free” so that was great!
The cover features a female with red hair and beautiful, striking green feline eyes, who I'd say represents Abigail Wade really well. This female certainly fits the imagery for Abby that I have from reading the book. Behind Abby there's the tree's that form the woods around the cabin that the evil human men take Robyn.
Would the cover make me want to pick this book up from a bookstore shelf? Yes, I love shifter books and those striking green eyes would really catch my eye and draw me to the cover!
This novella is Shifters series 6.5, Wildcats series 0.5 and also appeared in the brilliant Chicks Kick Butt Anthology too.
The main character’s in this novella are Abigail (Abby) Wade, female werecat (tabby) which makes her a rare and precious person and her all human best friend and college roommate Robyn Sheffield. Abby is enjoying the college life in Kentucky, Abby and Robyn have decided to go on a camping trip with college friends Dai, Olsen and Mitch. Once the camp has been all set out Abby decides to explore alone and uses the time to take the rare opportunity to shift into her werecat form and take a sneaky run.  It’s whilst she is running in her werecat form that Abby hears scream’s, the human scream’s of her camping companion’s. Abby return’s to the their camping area and looks on whilst hiding in the bushes in her feline form. Abby view’s the horrific scene in front of her, the two boys in the party of friends are already dead. Abby see’s one of the male attackers attempting to rape Dani, he actually bites Dani. When Abby see’s Dani’s blood on the males teeth she quite literally see’s red due to the fact it is not so long ago that she herself had been attacked. Abby manages to pull him off Dani but it seem’s her injuries are too great and Abby has to watch her friends life ebb away. This makes her all the more determined to save her roommate Robyn from the remaining two male attackers. During the fight with the remaining male attackers Abby in her feline form is injured with a knife. The men leave the dreadful camp scene and take Robyn with them.
It is only then that Abby risks shifting back to her human form, get’s dressed in whatever clothes she can find as hers are somewhere outside of camp where she originally shifted for what initially was a pleasurable run. The terrified and once again traumatised Abby finds a mobile phone and rings her Alpha Jace Hammond. As soon as Jace hear’s the voice of his pack tabby he knows something terrible has happened. Abby explains as best she can and whilst she is talking to Jace she can hear him shouting to more of the pack to join him on the road so they can get to Abby as soon as physically possible. Jace naturally instructs the precious tabby of the pack to stay where she is, that her male pack mates are on the way to rescue her. Abby is more like her cousin Faythe Saunders than perhaps she realised as when she ends the call with Jace she can literally hear Faythe speaking to her in her calming way, telling her what needs to be done. Abby partially shifts and sets off tracking Robyn hoping to prevent anything more happening to her best friend until reinforcements arrive. With the partial shift Abby has her human form but the eyesight and the hearing of her feline form. With her extra abilities in use Abby soon finds what must be the cabin her friend is being held captive, she notices a really large generator that is very large in comparison to the size of the cabin and its needs.
I will stop there as I think the rest of what happens would totally spoil the rest of the novella. Though this novella is short, it is packed with tension, secrets to be revealed and action. Some parts are really edge of your seat moments. I did read this novella after Lion’s Share instead of before it, though I personally would say the order in which it is read isn’t that detrimental to the books. The novella is a more detailed telling of an incident that becomes very important and more relevant as you read Lion’s Share. It would also certainly act as a “catch up” with the two main character’s that Lion’s Share, Wildcat’s Bk#1 is based on. The other characters are also mentioned briefly in this novella and feature more in the Wildcat’s Series.
I already loved Abby and Jace as characters in Rachel’s Shifter Series but this little novella gives you a little taster of what is to come.
Did I enjoy the novella? It was a great quick read novella!
Would I recommend the novella? Yes, I’d say it give’s you an extra understanding into the working of Abby’s mindset and action’s in Wildcat’s Bk#1.
Would I want to read more in the Shifter Series? Or Wildcat’s Series? I would absolutely adore reading more of the Shifters series but as far as I am aware this novella at 6.5 is the last of the Shifter series as well as novella 0.5 of the Wildcats series too. As for the Wildcat’s Series I am totally sold on wanting to read the whole series, no matter how many books it has already after reading this novella and Lion’s Share. As soon as I discovered Lion’s share was a spin off series from the Shifters one I knew I just had to read it! I think this novella acts equally as a Shifters Series 6.5 novella and/or a Wildcat’s Series 0.5 too.