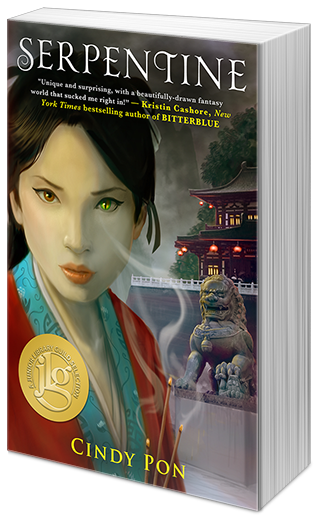 BLURB supplied by Chapter by Chapter Blog Tours
SERPENTINE is a sweeping fantasy set in the ancient Kingdom of Xia and inspired by the rich history of Chinese mythology.

Lush with details from Chinese folklore, SERPENTINE tells the coming of age story of Skybright, a young girl who worries about her growing otherness. As she turns sixteen, Skybright notices troubling changes. By day, she is a companion and handmaid to the youngest daughter of a very wealthy family. But nighttime brings with it a darkness that not even daybreak can quell.

When her plight can no longer be denied, Skybright learns that despite a dark destiny, she must struggle to retain her sense of self – even as she falls in love for the first time.

EXCERPT
“Skybright … ” He tugged her gently to him. “I never feel as if I can speak of my past with the other monks. Because of my birthmark. Because I’m different. But with you, I … ” He didn’t finish the thought, but instead leaned in and kissed her. It was like a jolt, quickening her pulse. His mouth was full, firm against her own. He smelled of camphor wood and sweat. Of boy. His tongue flicked across her lips and instinctively she opened her mouth to him. She gasped when their tongues met.
Warmth pooled in her stomach and spread, till her entire body was roused.

His hands had wound around her waist, sneaked under her sleep tunic so she could feel his rough palms against her midriff. They met at the small of her back and slid upward, till his fingers caressed her shoulder blades, and they were crushed against each other.

They kissed until the blood roared in her ears and she felt drunk with desire. Then something ignited inside of her, that now familiar heat, writhing through and pulsing down her legs. Terrified, she shoved his shoulders hard, and he stumbled back, dazed.

Skybright clutched her head between tight fists, willing the blazing heat away. Willing herself not to change. No. Not now. Not in front of Kai Sen. Her body shook with the effort, still trembling from the kiss they had shared. Terror constricted her chest.

His thumb stroked her cheek, and she jerked away from him.

“What was that?” She tried to catch her breath, and the words came unevenly.

“I’ve always wondered what it was like, to kiss.” His voice sounded low and thick.

“So you decided to experiment on the first handmaid you came across?”

The first handmaid he came across naked in the forest. Humiliation and anger wound tight within her, and she welcomed the emotions. Anything to smother the heat that threatened to rise below.

Kai Sen made a choking noise. “No. Of course not. I wanted to kiss you.” He lifted his hand to touch her again and she slapped it aside. “I like you,” he said quietly. “I’ve seen plenty of servant girls in town, wandering the markets. But you were the only I ever knew brave enough to climb a giant
cypress to spy on monks.” He smiled. “You’re the only one I’ve felt I could share my past with–”

“You don’t even know me,” she said. And it felt as if her heart was shattering like brittle porcelain, because Kai Sen  could never truly know her. Not ever. “Please go.” He took a step back, and she hated him for obeying her.

“Will you still meet me in the morning by the creek?” he asked. 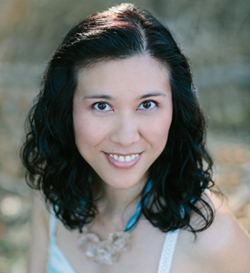 Cindy Pon is the author of Silver Phoenix (Greenwillow, 2009), which was named one of the Top Ten Fantasy and Science Fiction Books for Youth by the American Library Association’s Booklist, and one of 2009′s best Fantasy, Science Fiction and Horror by VOYA. The sequel to Silver Phoenix, titled Fury of the Phoenix, was released in April 2011. Serpentine, the first title in her next Xia duology, will be published by Month9Books in September 2015. She is the co-founder of Diversity in YA with Malinda Lo and on the advisory board of We Need Diverse Books. Cindy is also a Chinese brush painting student of over a decade.