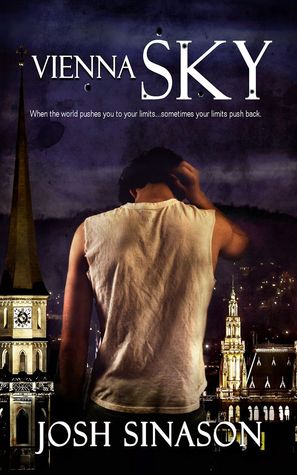 BLURB supplied by YA Bound Tours
A Spy-Fy, YA, Thriller. When Archie, a poor kid from New Jersey stumbles on a ring of spies working on a secret experiment, he ends up with a dead spy in his brain and the image of a girl he's never met haunting his dreams. When he goes halfway around the world to finish the spy's final mission he finds out just how much he can handle and just how far he's willing to go in the fight for love, honor and justice. 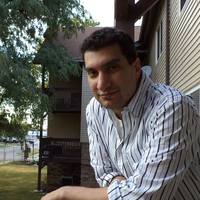 I do both serious articles and some artsy fartsy stuff, 2010 and 2011 Creativity Media Award winner.
Check out my recent work at
https://www.goodreads.com/author/show/8094737.Josh_Sinason.


Why I Love A Good Spy Story, and kids do too.

My book, Vienna Sky is out now from Eternal Press and combines character tropes from one of my favorites, Stan “The Man” Lee and the James Bond style spy pulp stories.
I’ve been a fan of spy stories since I watch The Living Daylights (the one where Bond teams up with what is for all intents and purposes the Taliban but I didn’t really know what at the time.) and License to Kill (the one where the producers really want you to think Bond is as cool as Riggs and Murtaugh) on TV as a kid.  but until I watched Roger Moore’s version I never really got it, even though Moore’s aren’t great either.  Some of the fun of Bond is that so many of them come just on the verge of being great movies but something pulls them back.  But Moore’s best, The Spy Who Loved Me, is a near perfect blend of the actual emotion and the sense of adventure the franchise inherited from the pulps they’ve been running from since the Timothy Dalton days.  Even the modern Bond films, are trying desperately to be “not your father’s Bond” that they forget the core of the franchise is in Young Adult and Pulp literature from Jack London, to Edgar Rice Burroughs and Sax Rohmer.
My other favorite spy literature comes from Graham Green.  The published version of the The Third Man is a masterclass in storytelling and the way he weaves the shadowy corners and bombshells with snub nose pistols in their garter belts and other elements that come right out of those pulp stories with a genuine world view and a deep emotional core that would influence not only the film adaptations of Green’s work, but Le’Carre, Ludlum, and every other espionage author until now.  Greene’s world of spies shows you that everything, every move you make, every left or right turn, has consequences and the things you think are true are only true on the surface, that’s the basis for so much great spy fiction and Greene’s work formed a lot of the basis for my novel out now, Vienna Sky.
Along with being a spy story, Vienna Sky also has elements gleamed from Stan Lee’s comics.  Lee, like Greene leaves no choice left without consequence.  We see that as Archie continues to explore his gift for personal gain and for those around him.  His choices to act and not act will ultimately come back to him until he’s forced into a situation that exposes who he really is inside and like Lee’s original Spider-man story, the choice to deny the call to be a hero has consequences.
Take a look at this excerpt, once Archie has headed the call to be a hero nothing comes easy and he finds himself a world away from anything he knew with the ghost of a dead spy in his head and he doesn’t always like what it has to say:

Again, I ignored my gut telling me to go see her right away. I sat there and watched from a distance.  It was standard procedure when confronting an asset that’s been left unattended anyway.  Still, I was looking forward to getting this paranoid streak out of my head with the rest of Agent Stephen Locke when this was all over.
The First National Bank of Vienna was an old brick art deco building covered in sleek new tinted glass windows.  The bricks were worn and bleached from too many winters, but the glass was brand new and freshly cleaned twice a week top to bottom.  There was a front gate with a wrought iron angel sculpture with massive wings and a guard that was a solid 230lbs and knew how to handle himself.  The place wasn’t kidding about security.  Even the window washers had background checks on top of background checks.  It was a hard building to get into, but not impossible.  I picked up patterns: where maintenance trucks were parked, when the guards switched spots.  I saw gaps in their system. They weren’t huge but they were enough for someone quick and small to get through.
Aside from the MI6 guy at the table behind me with the Sig 229 under his arm tailing someone on a completely different case, there was not a single spy to be found.  I surveyed the building on three sides over the hour and didn’t see anything suspicious.  I guess it was time to meet my asset.  Although, in all the surveying and spy hunting, I never really thought of just how I was going to get into the building.
The easiest way would be a zip-line from the building next door but I couldn’t think of any way to get one on such short notice, so I needed another way in.  I didn’t have Locke’s CIA resources, so I had to use what I had on me, what even Locke didn’t have: the face of a child.  Although, I really wanted to try that zip-line thing, Locke remembers the training course at Langley; it seemed fun to me.
“Excuse me, sir,” I said in German, as I did my best to act shy with my hands in my pockets and my head down low.  “Mr. Raines, my father, was just dying for a pastry.  I’m to bring it to him post haste.”
“He didn’t clear it with me.  You’ll have to wait here while I call him.”
“Well, um.”  I was backing away slowly.  I’d have to go back late at night. Maybe I can tail him and drug him or memorize the shift schedule and make sure to get them right at the switch and sneak in.  It’d take a few days, but maybe I could get that zip-line and maybe some surveillance equipment. I just needed a burn phone and—
There she was walking out with her bagged lunch to enjoy her lunch hour.  The sunlight hit her hair just right for me to see an auburn gleam from her highlights.  It was like she was actually wearing a halo.  Her bright green eyes lit up like one of those bronze statutes.
“Actually, never mind. Dad shouldn’t be eating the sugar anyway.”  I handed him the bag and quickly dashed across the street, holding my empty cup of coffee the entire time and the spring in my step so I wouldn’t look like I was running after her.
Locke had long since got used to tailing people.  The weirdness and uneasy feeling he had the first few times was a distant memory to him.  To me, following a girl who I never laid eyes on before that day but had dreams about every night for the last week, was awkward.  I mean, being turned down for the high school dance in front of the entire class awkward. Just like then, you power through and focus on what you want. After a few minutes, all the awkwardness melts away and you’re in genuine spy mode.  It was weird, but in that moment, tailing a girl I knew but never met because of someone whose mind was downloaded into mine, I felt like a real spy.
I followed a good half a block behind, sometimes farther, sometimes closer.  The trick to a good tail is to not follow the book on what makes a good tail.  Even someone untrained can tell when someone behind is walking just a little too deliberately.  So, being awkward gave me an advantage.  I had a lot of training at Park Slope High.
I tailed her a few blocks until we got to the Athena statue outside the parliament building where she sat and unpacked her lunch.  I kept my distance, still holding my empty coffee cup, pretending to take a sip every now and then.
The coast was clear; we were relatively alone.  All I had to do was approach her and tell her she was in trouble, we could go the embassy and get a flight back to New York.  I felt a little guilty about pulling her out of Vienna but—
“No way,” I said as I dropped my coffee cup.  “Not now.”  It was on the clear other side of the parliament gardens, but I could see it.  The way he stood there, the way he held his jacket tight so no one could see his gun. It was clear.  This guy was here to start something.  I started thinking about ways to get over there and disarm him without taking my eyes off Rebecca.  I was about to move around the other side, drawing him back toward the maintenance entrance.  Right then, I wondered if the gun in my backpack was loaded.