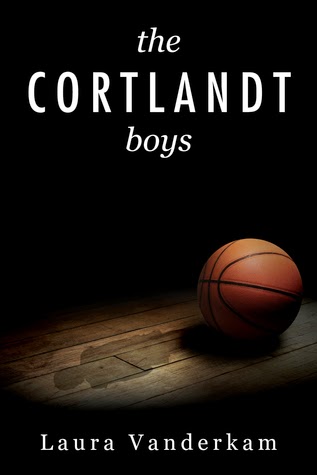 BLURB from Goodreads
A small town high school basketball team wins the Pennsylvania state championship with an improbable last second three point shot. The Cortlandt Cavaliers celebrate their unlikely victory, but good fortune changes the boys’ worlds in unpredictable ways. This story revisits the characters 10 and 20 years later as the ramifications of their youthful success play out over the course of their lives, forever linking them and the people around them to this little town that has its ways of not quite letting you go.


What is your name, where were you born and where do you live now?
Laura Vanderkam. I was born in Raleigh, N.C., and I now live outside of Philadelphia. In the meantime, there have been stints in Indiana, New Jersey, Washington D.C., and New York City.

Did you always want to be a writer? If not what did you want to be?
I’ve always wanted to be a writer. Writing is what I’ve done just for fun since I learned how to read. I’d considered other career possibilities, but mostly because I didn’t know one could make a living as a writer. It turns out you can!

When did you first consider yourself as a "writer"?
I’d been freelancing for newspapers and magazines as a way to make money all through college, but when I was 24, I finally quit my last part-time “regular” job. Writing was paying my bills, so I couldn’t call myself anything but a writer. I guess that’s when it dawned on me that I really was one. I’ve been writing books and articles ever since.

Did it take a long time to get your first book published?
I was fortunate enough to observe the book publishing process by being hired as the co-author for an education book about a year after I graduated from college. That made it relatively easy to get my first non-fiction book contract, which was for a book about young people and self-employment. The problem? That book didn’t sell very well! My first book that got any attention, 168 Hours, sold when I was 30 and came out when I was 31. So I guess in that sense it took a while. Fiction has been an even longer process. I’ve written several novels before, but The Cortlandt Boys is the first I’ve published.

What is the name of your latest book, and if you had to summarize it in less than 20 words what would you say?
The Cortlandt Boys: A small town basketball team wins the state championship, then deals with that lucky break for decades after.

How long does it usually take you to write a book, from the original idea to finishing writing it?
It differs for fiction and non-fiction. With non-fiction I generally have a contract with a specified deadline and target publication date. That means it’s about 2 years from starting to seeing books in stores. With fiction, everything is more fluid. I wrote The Cortlandt Boys over 10 years, though most of that time wasn’t spent writing. I wrote half of it at the beginning, sat on it for about 8 years, then came back to it to finish it.

Which of your books were easier/harder to write than the others?
The Cortlandt Boys was definitely more challenging. I kept thinking I was done, then I’d put the manuscript away for a bit, come back to it, and not be happy. I had dozens of other people read it and critique it, and I hired multiple professional editors as well. Eventually, I was satisfied with how it turned out, but since there wasn’t a deadline, it was a leap of faith to declare myself done.

What can we expect from you in the future?  ie More books of the same genre? Books of a different genre?
I do plan to write more novels. The Cortlandt Boys doesn’t fit in a particular genre, and I’m not sure my future novels will either. I write what I enjoy reading, and my tastes don’t fit into a particular genre. There are usually strong female leads, small towns, and someone will be a writer. But beyond that, it’s all up for grabs! My next non-fiction book, I Know How She Does It: How Successful Women Make the Most of Their Time, will be published by Portfolio in June.

If you had to choose to be one of your characters in your book/books which would you be? and why?
I probably identify most with Max, the intrepid reporter who’s the heroine of the first half of The Cortlandt Boys. But she’s a lot gutsier than I am. I wish I were that bold!

Where do you get your book plot ideas from?What/Who is your inspiration?
The seed of an idea for The Cortlandt Boys came from something that happened. Years ago, the basketball team at my high school in Indiana won the state championship. It was such a big deal. I got to wondering what life would be like when something so fantastic happens to you when you’re so young. What is your adult life like after that? The rest of the book is complete fiction, but that was the original inspiration. I also tend to be inspired by places. The town of Cortlandt is modeled after the geography of Jim Thorpe, PA, which I love visiting. When I was finishing up the novel, I visited the town for a weekend for a writing retreat, and spent a lot of time just walking on the snowy streets. The next novel I plan to write has been partly inspired by a house I drive past close to daily. It’s got red siding and stone walls, and looks like such a rustic retreat. I’m picturing my characters living there. Hopefully the more I drive past it, the more I’ll figure out!

Do you have a certain routine you have for writing? ie You listen to music, sit in a certain chair?
I have a home office where I do a lot of my writing. My desk looks out at my backyard, which has lots of trees, and lovely flowers in spring and summer. The one issue, though, is that I think of my office as being reserved for “serious” (i.e. billable) work. When I started working on the novel, there was no way of knowing how it would turn out. I often needed to go to the library at night to write to get around that idea that I should be writing articles someone was going to pay for when I sat at my desk.

Do you read all the reviews of your book/books?
I do! I have Google alerts out for my name, and I try to read everything people write. It’s hugely flattering that people take the time to read my work (fiction and non-fiction). I try not to have a thin skin. I’m well aware that I can improve, and if people take the time to engage with my ideas and prose, I appreciate that.

What was the toughest/best review you have ever had?
My first time management book, 168 Hours, got a fair number of critical reviews (you can check the Amazon page if you want to read some of them). But the book has long since sold out its advance and I continue to hear from people all the time that it’s changed their lives. The people who like it tend to really like it.

Do you decide on character traits (i.e. shy, quiet, tomboy girl) before writing the whole book or as you go along?
I generally have a rough idea of my characters before I start writing, but then I learn more about them as I write. I see parts of their personalities as I see how they’d react in a situation. We get to know each other as part of the writing process.

Do you basic plot/plan for your book, before you actually begin writing it out? Or do you let the writing flow and see where it takes the story?
As with characters, I have a rough idea of where the story will go. But some developments can only come after you’ve written a fair amount. Plot points beget more plot points. For me, at least, it’s important to get a draft down. Then the real work can begin.