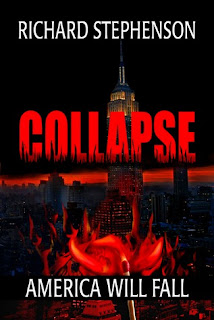 Collapse was released on July 6th, 2012.  In the month or so leading up to its release I had made the decision to go exclusively with Amazon in the KDP Select program.  I had done my homework, it seemed like the smart thing to do.  Just before the release, I had several people ask me if they would be able to get Collapse on the Nook.  Not wanting to disappoint them, I figured it wouldn’t hurt to make Collapse available on other formats until sales dropped low enough to make the switch to Select.


An acquaintance (more like a friend of a friend, I’m not sure I’d recognize the guy if I saw him on the street) had already self-published a few books the previous summer and I always kept a close eye on his rankings.  I also kept a close eye on his reviews, which were far from kind.  Some of the most horrible one star reviews I’d ever read adorned both of his books.  One of his titles had many accusations of being plagiarized pornography stolen from an erotic fan fiction forum (dressed up as science fiction for some reason).  ”This man is a blight on the literary world, his grasp of the English language is tenuous at best” was one of the reviews that I remember most clearly.  He has since taken both of the books down and figured the third time’s a charm with his recently released title.  His latest entry is also suffering similar reviews blasting his poor grammar skills and confusing plot.
Okay, what does this have to do with KDP Select you might ask.  Thanks to the handy ebook tracking tool at Kindle Nation Daily I was able to track the progress of his work.  His work would usually hover around the 60K neighborhood on the rankings.  The days following his free promos, he would skyrocket into the 1-2K rank, even going as high as 692.  The next day, he would very quickly spend the next two days plummeting back to the 60K range.  This impressed me a great deal, clearly there was something to this KDP Select thing.  If the free promotion could propel a very poorly written book (based on reviews mind you, I only read the sample, which was awful) into the top 1000 then it was definitely worth giving a try.
Collapse had been available on non-Amazon outlets for almost a month and it was time to evaluate sales.  Here is where I was at when I made the decision to go Select. (Does not reflect paperback sales)
Amazon: 162 sales
B&N: 31
Kobo: 2
SmashWords: 1
The decision wasn’t hard to make.  I had pointed the majority of my promotion back to the main sales page for Collapse here on this blog.   It’s quite clear from those statistics that Amazon truly does hold the vast majority of the ebook market.  Going Select just made sense to me so on August 2nd I pulled Collapse from the other outlets and went exclusive with Amazon.
On August 4th and 5th I had my first free promo weekend.  On August 3rd I spent a great deal of time getting the word out to potential readers.  I was very fortunate to have a comprehensive list at my fingertips thanks to Rachelle Ayala’s blog.  I made as many notifications as I could and programmed TweetAdder to start informing the Twitterverse of my upcoming promotion.  I also used the very efficient Tweet Teams at the World Literary Cafe to help get the word out.  For more information on how to effectively use Twitter for book promotion, please read my blog entry.
The free weekend was a huge success. Collapse made it to #17 on the Top 100 Free list and stayed at #1 on the Free list in both of my categories (War and Political).  On Monday morning, the instant my eyes opened I logged on the check the final stats – 13,957 downloads.
The terrific promotional tool of staying on the Top 20 Free list right next to the Top 20 Paid list and staying at the top of my categories’ Free lists was great exposure, but did it pay off in terms of sales?
Absolutely.
For the month of July, I sold 191 digital copies of Collapse on Amazon.  In the two days following my free promo weekend, I sold 218 copies and 51 borrows.  That’s right, in two days, I sold more copies than I did the entire previous month.  I should note a disclaimer, I priced Collapse at 99 cents for the four days following the free promo.  Some might think that was the wrong move since I was missing out on a lot of money.  Maybe that’s true, but I’m thinking long term exposure.  I am writing a series of four books and my goal is to get the first one out there to as many readers as possible so the series will be an overall success.  Also, I’m not financially dependent on my writing in any way at all so I’m free to gamble on my promos to find out what works best.  I was originally only going to keep the 99 cent price for the day following the promo, but darn it if the book didn’t keep climbing up the ranks all the way to 1,159 and in the Top 10 on both of my categories.  Once it peaked and starting slipping back the other direction, I raised it to the regular price.
I have no regrets when it comes to Select, best decision I’ve made in terms of marketing.  As of the date of this post, my rankings have stayed in the 2K range whereas it was in the 15K to 20K range prior to the free promo.