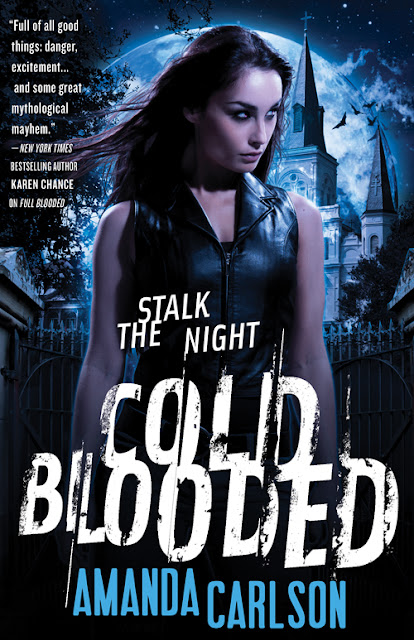 BLURB from the Author Amanda Carlson
"Jessica arrives back in town to find her best friend missing and the most powerful witch in the country is blaming her for it. But before they can move to save her, the group is attacked.

On the run, Jessica and Rourke head to the mountains. Several surprises await them, but in order to save her father they are forced to leave for New Orleans early.
Arriving on the Vampire Queen’s doorstep unexpectedly, and bringing trouble on their heels, the Sects are thrown into an all out war. The vicious skirmish ends up forcing the vamps and Jessica to fight on the same team.
The Vamp Queen ends up owing Jessica, but what Jessica doesn’t realize is just how soon she’ll have to cash it in."


MY COVER COMMENTS
Mmm you all probably know by now that quotes on the front of books by other Authors are one of my pet hates. It really doesn't matter who the Author is. I have read and love Karen Chance but I'd still prefer her quote to be on the back cover of the book or even on the inside cover, though glad to see she has only all nice things to say about this series of books!
As I love the character of Jessica, I love the image of her looking strong and possibly ready for a fight on this cover. There's the moon in the background, which is a reference to her being were. Also I do like the fact the moon has featured in different ways on every cover in this fantastic series of books. I like the little byline "Stalk The Night", not totally necessary as the cover would be as dramatic and eye catching without but I do like it. The font of the title, and authors name fit great too, which fit and continue along the same path of the other books in the series.
So overall do I like the cover? Yes! Would I pick it up from a bookshelf? Oh Yes!
Now I can't resist a little comment or three on the blurb . . . . Ooooo it sounds really good. . . .no I mean reeeally gooood. I mean I have yet to read Hot Blooded but wow I wanna read Cold Blooded too now! So there's more of the Vampire Queen, and she wants Jessica's powers? There's a vampire gala . . .so more vamps in this book, and werewolves are rebelling . . .Mmmm Jessica better be even more careful then. Then near the end of the blurb it tells us that Jessica gains the Debt Of Life so she obviously saves the Queen somehow which yep sounds a good thing . . . but then isn't the Queen after Jessica's powers, and why does she need to cash in the Debt Of Life so soon?
So to sum up what can I say? The book looks good. . . .real good and the blurb wow! when can I have a copy of Hot Blooded and cold Blooded to read????