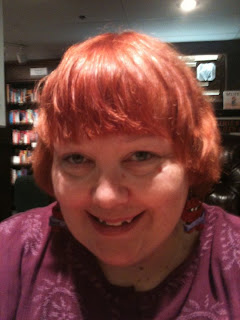 Did you always want to be a writer? If not what did you want to be?
I wanted to be a ballerina for many years and took ballet from the time I was three until I was sixteen. It was then I realized I’d never be a prima ballerina so I gave up that dream. I also wanted to be a singer and an actress. I sang in cafes when I was a teenager and did some musical theater. I acted in community theater and even went to acting school in New York City. I did some dinner theater too.

When did you first consider yourself as a "writer"?
I’m still working on that. LOL.

Did it take a long time to get your first book published?
No. I published it myself. It was about two years from the initial writing of the first draft to the final product.

Do you work another job as well as your writing work?
Yes, I teach at a local community college.

What is the name of your latest book, and if you had to summarise it in less than 20 words what would you say?
WAR OF FEI, book 2 of the LORE OF FEI YA faerie series. WAR OF FEI is the continuing story of the faeries trying to reclaim their land of Fei from the humans who stole it from them.

Who is your publisher? or do you self publish?
I do both. I have published with small publishers and have self-published on Kindle/Nook/Smashwords. WAR OF FEI is published by Muse It Up Publishing. I have a YA contemporary coming out soon from Gypsy Shadow publishing that’s about a 17 year old girl who wants to be noticed so she takes it upon herself to try and become famous in ten days with comedic results. I call it my Comedy of Errors and Cyrano De Bergerac novel.

How long does it usually take you to write a book, from the original idea to finishing writing it?
It all depends. Some books take longer than others. I wrote AINE and the sequel, FAERIE FOLK in two weeks. I wrote LORE OF FEI in one month during NaNoWriMo (30 Days and Nights of Literary Abandon), the international write a novel in a month competition in November. It took me two years to write a murder mystery only because I had to keep changing it around.

What can we expect from you in the future?  ie More books of the same genre? Books of a different genre?
YA contemporary from Gypsy Shadow Publishing coming soon. HOW TO BE ALMOST FAMOUS IN TEN DAYS.
YA science fiction coming soon with zombies.
I also have a middle grade zombie book I am querying agents with right now.

Do you have plans for a new book? Is this book part of a series?
Yes, I am working on another YA contemporary with historical elements right now. No, it won’t be part of a series.

What genre would you place your books into?
YA fantasy

What made you decide to write that genre of book?
It speaks to me.

Do you have a favourite out of the books you have written? If so why is it your favourite?
WITCH HUNTER is my favourite because it’s my first “baby.” I also like my YA historical fiction, FITZROY: THE BOY WHO WOULD BE KING, it’s been a top 100 bestseller in the UK since December, 2012. I had fun writing a book from a boy’s point-of-view. I also really like my newest novella, SIN-EATER GIRL because I adore Celtic legends and love to research them. Of course I also like my faerie books. LOL.

Do you have a certain routine you have for writing? ie You listen to music, sit in a certain chair?
I sit at my kitchen table and look out at trees as I write.

Do you have anybody read your books and give you reviews before you officially release them?ie. Your partner, children, friends, reviewers you know?
Yes, I have both beta readers and critique partners who give me feedback. They don’t review my books though, that’s why I do blog tours.

Do you gift books to readers to do reviews?
Yes, I can and have.

Do you read all the reviews of your book/books?
No. Only if someone points out one, I figure if someone likes a book, they’ll give it a favourable review, but if not, that’s okay too. Not everyone has the same taste. I respect that.

How do you come up with the Title and Cover Designs for your book/books?Who designed the Cover of your books?
If it’s one I self-publish, I do the covers (except for AINE, I had a professional do that one) and come up with my own titles. The ones published by small publishers, like WAR OF FEI and LORE OF FEI were done by Nika Dixon who is AWESOME, I might add.

Do you choose a title first, or write the book then choose the title?
Sometimes the title comes first, sometimes the book. And sometimes when you think you have a good title after you’ve written the book, you need to change the title. For example, my current book, WAR OF FEI had the working title of Sacrifice.

Do you have a treasured book from your childhood? If yes, what is it?
Alice in Wonderland.

Guest blogger every 5th and 19th of the month on
www.downtownya.blogspot.com