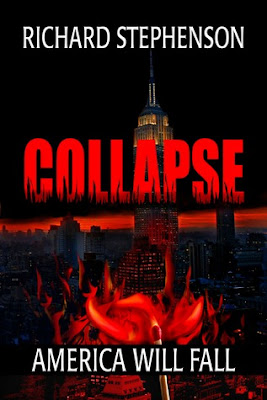 BLURB from Goodreads
America is falling, ready to join the Roman Empire as a distant memory in the annals of history. The year is 2027. Tired and desperate, the American people are deep in the middle of The Second Great Depression. The Florida coastline is in ruins from the most powerful hurricane on record; a second just like it is bearing down on the state of Texas. For the first time in history, the Middle East has united as one and amassed the most formidable army the world has seen since the Third Reich. A hidden army of terrorists is on American soil. This is the story of three men: Howard Beck, the world’s richest man, also diagnosed with Asperger’s Syndrome. Richard Dupree, ex-Navy SEAL turned escaped convict. Maxwell Harris, a crippled, burned out Chief of Police of a small Texas town. At first they must fight for their own survival against impossible odds. Finally, the three men must band together to save their beloved country from collapse.

COVER COMMENTS
I know that this isn't a "Cover Reveal" but I am going to start adding Cover Comments to some of my Promotional Posts too.
I find this cover appealing, it looks dramatic and draws your attention to it. I like the title, and author name placement on the book, and I love the byline of America Will Fall, it does really have a shock/horror quality to it, making you think about the book. The colour of the title suggest fire and danger.
Would the book attract my attention from a book shelf? Yes!