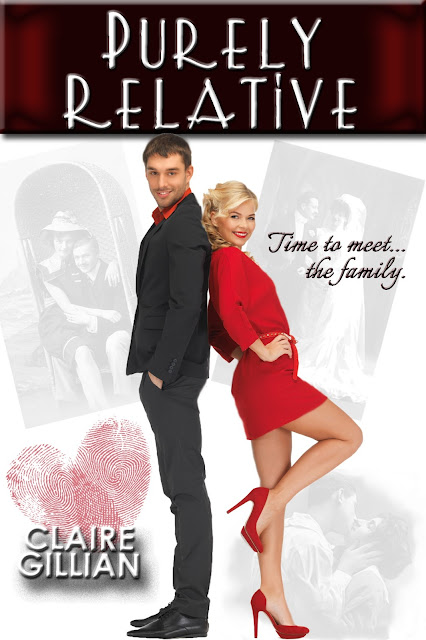 Unemployed and living far from home, Gayle Lindley is nevertheless lucky to be alive after narrowly escaping her murderous ex-employer. She’s also thankful to the boyfriend gods for having blessed her with a former co-worker. Jon Cripps is brains, brawn and bedroom-certified, all in one delectable package. Life is finally on the uptick.

…Or so Gayle thinks until Jon pops the big question—no, not marriage, but meeting the rest of his family. What he neglects to mention is his loose familial definition also includes the parents of his ex-fiancée. And too bad Gayle has already met one sibling while engaged in a vigorous mattress inspection with Jon. Everyone will think she’s a man-stealing hussy!

As Gayle tiptoes into the bosom of Jon’s extended family, she is deluged with more secrets than even her curious nature can absorb. But the drama hits hardest when Jon, mysterious as ever, drops a bombshell that threatens to unravel every single stitch of progress she has made with him and his ... ‘interesting’ relations.

Other books in the series:
The P.U.R.E.

Add to your Goodreads “Want to Read” shelf:  Purely Relative

A little bit about Claire Gillian
Claire Gillian is the pen name for a number-crunching executive by day and a darkly romantic curmudgeon by night. Her debut novel, The P.U.R.E. was released in April 2012. She also writes fifty shades naughtier stuff under the pen name of Lila Shaw, but please don’t tell her mother. No matter which name she uses, Claire is happiest penning romance drenched in humor with a dash of intrigue and loads of spice.

Claire lives in the boggy Pacific NW with her husband and two teen-aged sons.

MY COVER COMMENTS
Though its a "Cover Reveal" post I'll start with my thoughts on the title, which I think is perfect, it fits the blurb well and of course having Pure within the title ties this #1.5 well in with Bk#1.
This cover gives the book a more chick lit look and appeal, whereas I think P.U.R.E. had a more "serious" business type looking cover. I guess the girl on the cover is to represent Gayle, though I admit I hadn't particularly pictured her a the "blonde on the cover", but then again we never saw Gayle's head on the cover of P.U.R.E. the impression the girl on the cover is giving fits with Gayle's character well. I am presuming (having not yet read the ARC-I am on the lucky list to read it soon as its available and looking forward to it too)the guy on the cover is Jon Cripps. the very man who rescued Gayle in P.U.R.E.
So do I like the cover? Yes. Would I pick it up from a book shelf? Yep I'd definitely give it a look.
So now to the blurb... So Gayle and jon's relationship is obviously moving on and up a notch, he's asked her to meet his family. Gayle obviously a little taken aback that meeting the relatives includes meeting an ex-fiancees parents too!! It sounds from the blurb like Gayle is getting herself into all sorts of strange situations again, meeting one of Jon's relatives whilst in a rather embarassing position, which gives totally the wrong impression of herself that she is wishing to put across.
It sound like this book is full of laughs and embarrassment, probably on all sides of the families. Definitely looking forward to reading this one and very happy and appreciative that claire has offered me an ARC so I get to read the book early too!
I loved P.U.R.E and wanted to know more about Gayle and what would happen next with her and Jon so here's my answer in this book I guess.