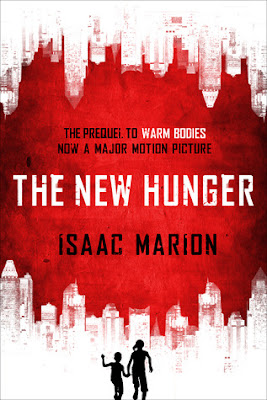 BLURB from Goodreads
New York is a bayou. New Orleans is a reef. The entire country has been devastated by natural disasters and governmental collapse, and on top of everything else there is the annoying problem of zombies trying to devour you at every turn. But sixteen-year-old Nora and her younger brother Addis are about to discover the most frightening thing yet: being abandoned in this horrific world by their own parents.Left with only a bag of clothes and a first-aid kit, Nora and Addis begin a harrowing journey to connect with anyone who isn't looking to rob them or eat them. A wounded man wrecks a meal of green beans and French fries at the top of the Space Needle in Seattle. An attempt to get a good night’s sleep in a fortified motel is ruined by an undead face staring at them through the window. And they just can’t seem to shake someone – something – that’s been following them everywhere they go…. Meanwhile, a girl named Julie is traveling toward the city in an SUV with her parents. She is only twelve, but has already seen friends die and her school burn. She has watched her father become nearly as cold and remorseless as the Dead. All she wants is someplace to call home, even if it never really will be.And somewhere nearby, a tall man awakens in the woods, unsure of exactly where he is, or even who he is. As he struggles to remember details of his life, a single consonant comes to him: R. He is…a name that begins with R….Isaac Marion once again demonstrates his remarkable gifts as a storyteller as he brings the world of WARM BODIES back to life. Grounding his characters in real emotion, Marion makes you root for them to save the world even as they simply try to stay alive. 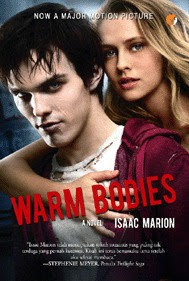 (There are multiple different covers for this book, especially now with the movie tie in one but the one I have chosen to use is my....er phwoooar favourite!)

BLURB from Goodreads
A zombie who yearns for a better life ends up falling in love—with a human—in this astonishingly original debut novel.R is a zombie. He has no memories, no identity, and no pulse, but he has dreams. He doesn’t enjoy killing people; he enjoys riding escalators and listening to Frank Sinatra. He is a little different from his fellow Dead.Not just another zombie novel, Warm Bodies is funny, scary, and deeply moving.