This Promotional Spotlight is extra-special as I wasn't asked by the Author to help promote him and his book. I found an article via an authors blog (Suzy Turner's) which led me to Peggy Edleman's blog an original atricle . I felt I wanted to do my bit as a blogger and help promote Chad Morris and his book. Why you ask? Because Chad is busy helping his nine year old daughter in her fight against a brain tumour. So obviously chad is busy doing that, and as there's nothing I can do for his daughter except send her my love and best wishes, I thought I'd feature this book and tell you all about it to try and help Chad in a small way. 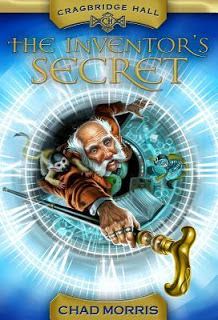 BLURB from Author, Peggy Edleman's Blog Article.
Imagine a school in the year 2074 where students don’t read history, but watch it happen around them; where running in gym class isn’t around a track, but up a virtual mountain; and where learning about animals means becoming one through an avatar.Welcome to Cragbridge Hall, the most advanced and prestigious school in the world. Twin siblings Abby and Derick Cragbridge are excited as new students to use their famed grandfather’s inventions that make Cragbridge Hall so incredible. But when their grandfather and parents go missing, the twins begin following a trail of clues left by their grandfather. They must find out where their family is, learn who they can trust, and discover what secrets are hidden within Cragbridge Hall.Abby and Derick soon realize they are caught in a race with a fierce adversary to discover their grandfather’s greatest secret–a dangerous discovery that could alter both history and reality.

Chad Morris grew up wanting to become a professional basketball player or a rock star. (Inspired by Animal from the Muppets, he’s been banging on drums since he was eight years old.) After high school, he wrote and performed sketch comedy while going to college, and eventually he became a teacher and a curriculum writer. He lives in Utah with his wife and five kids. Chad would love to teach at Cragbridge Hall.Unlike Oscar Cragbridge, however, he hasn’t really invented anything, though his son once sketched out blueprints for a machine that would turn celery into cookies.
Where to find him:Blog Facebook Twitter Website