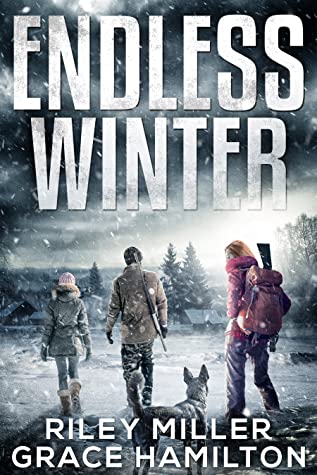 When an experiment to reverse climate change goes disastrously wrong, Jarred and his daughter Hope are forced to head south in search of warmth. This man-made eternal winter shows no signs of stopping, and with temperatures continuing to plummet, fears of a new ice age drive survivors into a panic.

Jarred and Hope don’t have the wilderness skills needed to survive this disaster. But when their car spins out of control, they’re forced to fend for themselves in the ruthless and unforgiving forest surrounding them. And as they journey through the snow-swept wilderness, they slowly discover they are not alone…

Survivalist Fiona knows how to deal with a harsh winter on her own, but this new world is deadly. She’s got a cabin stockpiled, and is all alone until she runs across Benjy, a forest ranger who’s ready to help, but has his own reasons for staying with her.

Civilization is crumbling. There’s no electricity. The cold is getting worse, and resources are scarce. To survive, Jarred and Hope will have to find allies they can trust, and push themselves harder than they ever imagined. Because even a moment’s weakness in this harsh icy wasteland can mean only one thing.

Freezing to death in the merciless cold…

REVIEW
One of the things that initially attracted me to the book was the cover, which sets the scene for the book perfectly. I would say the people featured on the cover are Jarred, his daughter Hope and strong, independent main female character Fiona. It could easily be a snapshot of a scene from the book. The cover immediately reminded me of Grace Hamilton’s After The Shift Series covers and the Edge Of Collapse series covers by Kyla Stone’s. I have read quite a few of Grace Hamilton’s books and have enjoyed them so of course I keep an eye out for her releases. I read the blurb of this one and it interested me.

The book begins by introducing some of the characters, Jarred and his daughter Hope being at home watching the weather and snow storm flow in. It’s when Jarred speaks to his old friend Atul that a general chat turns into a revelation and a timely warning. It seems the “early winter” is not just a coincidence; it is in fact a man-made experiment that has gone drastically wrong. Atul suggests that Jarred pack his car up and head as far south as he can get with his teenage daughter Hope.
The next character to be introduced is Benjy Hartman, a ranger, who leaves his ranger station with its limited supplies and comfort and foists himself off on Fiona, a single woman with her own homestead. Fiona is a capable, independent woman who has tried on numerous occasions to dissuade Benjy Hartman’s advances but it seems he still thinks he has a chance of romance with her. In fact, he actually thinks Fiona should be grateful to him for any/all help he offers. When he turns up at her homestead and wangles his way in, offering to help sort a leak out in her cellar, where her animals are now being kept because of the freezing cold and heavily falling snow. However, it soon becomes apparent that he thinks Fiona should be more than grateful, and makes it clear what he wants from her, skulking about at night outside her bedroom door. Fiona decides that the very next morning she will demand he leaves, and she does, but just as he is literally going through the door there’s a knock on it. Hope has trudged to Fionas homestead in search of help for her father, Jarred, who is injured. Jarred is rescued and brought back to Fiona’s smallholding, where once again Benji makes himself comfortable. I don’t want to go into much more detail and reveal too much of the plot but soon Fiona finds her home becoming even more packed with some of her neighbours, from nearby Glencoe. There’s Larry & Lana Bishop and their teenage son Kane, and Myra & Duke Cooper. For a while, things plod along, but then disaster strikes and the group find themselves cast out in the snowy terrain with only a vague plan to head to some local caverns. The rest of the book covers their journey, coming across various dangers from the weather condition, wild animal and worse still other survivors with their own harsh or strange ways of living and beliefs.

This book just became more and more intriguing as it went on. Just when you think the group are reunited, safe and sound from those awful wintery conditions they are faced with being attacked by a woman and her group who will stop at nothing to get revenge! When the hurdle is overcome by quite literally blocking themselves in they search and explore their new “home” when they come across another group already living there. It seems their next hurdle to overcome is a family of religious cult like zealots. I found myself wondering how much more these increasingly physically & mentally exhausting group of people could endure and have to overcome to finally find a safe haven that thy could truly settle in and call home!

The character I loved the most, and did actually identify with was Fiona, she looked strong on the outside to others, putting on a brave face and a confident attitude whilst caring for others and trying to think and work her way through problems. Whilst on the inside being insecure, hating feeling like she is letting people down in any way. Feeling every set back is her fault and that she is somehow personally responsible. Fiona also prefers her own company, she isn’t a great talker, she feels uncomfortable making decisions for others or being “closed in” in anyway. Which at time almost becomes her own downfall when she withdraws into herself and doesn’t talk things out with other. When one of her travelling group dies, she takes it to heart and immediately blames herself for the death. Fiona is not the only tough, independent female in the book, as Jarred’s teenage daughter Hope is too. Hope’s father is an engineer, and Hope is good at planning, designing and building anything the group need. Hope is also brave when she has to leave her father behind in the snow to go in search of help. Hope manages to build a windbreak to give her dad some shelter and manages to guide Benji back to where she left her dad to rescue him. Hope becomes quite attached to Benji as he allows her to help in the chores he is doing and allows her to do things that perhaps her father wouldn’t like moving vehicles and then he heaps praise on her which makes her like him even more.

I also adored the animals within this book, that really added value to the book and played their parts making some light hearted moments within the book and with them “saving the day” on more than one occasion. Ramses, described as an “’ornery ram” sure lives up to his reputation causing havoc, attacking the other goats and chewing on furniture. Then later in the book he really does work hard for his humans, pulling sleds and carrying supplies. The other animal is also Fiona’s and is a gorgeous dog Smoke, that though he has questionable taste when he seems to like Benji Hartman, when it comes down to it, Smoke will do whatever he needs to in order to protect his human. Like his owner Smoke instantly takes to Jarred and Hope, accepting them as family.

A couple of the characters and their traits and personalities made me think of a couple of characters from Kyla Stone’s Edge of Collapse series. Fiona reminded me of Hannah who was also a character that would do whatever she had to do to save those she cares about. Also, Benji Hartman gave me the creeps in the very same way that Gavin Pike did, and the feeling sort of turned out to be right. I have to say I enjoyed disliking the bad guys almost as much as I loved the good guys.

I also loved the way how Kane & Hope could problem solve like adults and were treated fairly equally, being allowed to give their opinions on what should happen etc. yet at the same time they still also had the more normal teenage angst type of problems.

I enjoyed the emotion between the characters who rapidly became like one big family. I saw the subtle signs of attraction between Jarred and Fiona as soon as the characters were in the same room, but loved that it was a slow burn, rather than a “full on” romance between them. There were just hints at romance it wasn’t at the forefront of the book. The idea of sheltering and starting life over in a series of caves was really interesting and I would have loved to learn a bit more about the details and workings of that. To be totally honest all the main characters were great, and I found all their interactions with each other and other outside their immediate group interesting. There was quite a bit of violence/killing in this book but it was “killing to survive” and was not “glorified” and only done when absolutely necessary and when it was a matter of the survival of the group.

My immediate thoughts upon finishing this book were, Wow! This one kept me reading into the early hours of the morning! I really enjoyed this book, It reminded me a little of Grace Hamilton’s After The Shift as well as aspects of Kyla Stone’s Edge Of Collapse. This book was an introduction to Riley Miller, an author I hadn’t read before. I will definitely be on the look out for more books by this author.

Summing up, I admit I did approach reading this book with a little trepidation as the book is co-authored by Riley Miller, an author I have not read anything by as yet.
I always wonder how the co-authoring process works and admit was a little apprehensive about if this book would be as good as the one’s she writes alone. However, I have to say that it was seamless, I could neither pick out any sections I didn’t really like, nor any characters I didn’t find believable. In fact, I would love to know how the writing process actually happened, were the two authors in the same room, via email or zoom? Did they each have their own sections or their own characters that they wrote for. How this book ended suggests it was a standalone but I hope to read more by either both these Authors individually as well perhaps more books written together or with other authors too.