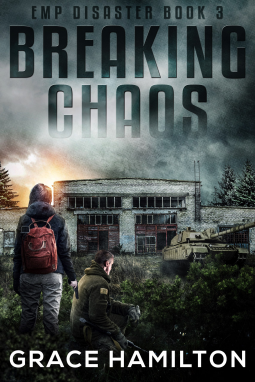 BLURB from Goodreads
Abandon all hope…

The factory was supposed to be the last safe haven left on Earth after an EMP catastrophe shut down power worldwide. But Melanie’s group isn’t the only one who wants it. A militia who are determined to capture Nate take over her base of operations, forcing Melanie, her family, and her friends to flee into the unforgiving wasteland.

Beyond the walls, the outside world continues to spiral into darkness. With enemies on their trail, Melanie’s only hope for survival is to keep moving… or sacrifice Nate for the good of the group. After all, they can’t run forever, and she can’t deny that caring for Nate is slowing them down…

Hunted and on the run, the threat of sickness and injury hangs over their heads. Their journey will take them through savage territory, populated by desperate people who will do anything to survive. If her ragtag group can’t find a new shelter, tragedy will claim them all.

But when a team member goes missing, Melanie is forced to make a choice: keep moving forward, or risk it all to make a stand…

REVIEW
As with the previous two book covers in this series, this cover doesn’t disappoint. I could easily see it as a scene from within the book. The book covers of this series have enough things similar, yet still enough differences to stick to a continuity of themed but still pique your interest too.

After reading the first two books in this series I was quite literally counting down the days to this final book being released and wow it didn’t disappoint!

The book picks up right where the previous one ended. It turns out Cooper, the leader of the crazy prepper cult that Derrick Platt was part of has run away to get back up, and they have arrived in army vehicles and seem to have a whole arson of weapons at their disposal. As those inside the factory stare intently through their binoculars fear strikes Nathan Platt. At first speechless, but when he recovers from the initial shock, he reveals that the woman standing by the tank leading the army vehicles is his own mother, and it now seems that she is the leader of the even crazier group of preppers called the “Wolverine Militia” that were formed by Nathan’s paternal grandfather Clarence Platt. It seems like his mother, Sue Ellen who married Derrick Platt is now the leader of this heavily armed bizarre group. Though however bizarre they look, Nathan has a serious warning that Sue Ellen doesn’t take no for an answer. If she wants something she will fight for it to the probably bloody, violent, bitter end. It’s quite clear Nathan is petrified of his mother however twice he volunteers to give himself over to his mother for the greater good of the group. In the hopes his mother will let his new friends he actually classes as family go free with no repercussion’s.

I really grew to love Nathan as a character in this book. You come to understand him much better and understand his reticence and his way of looking almost scared of his own shadow let alone any other person. The only person he seems to get along with and open up around is Shona Pearson. As Nathan reveals how he was subjected to beating and various humiliations by his parents, Shona’s mother Melanie thinks back to her own troubled childhood and finds herself identifying with the young teen. It’s clear its her own mistreatment that makes her all the more determined to keep Nathan away from his mother and the very real possibility of him being beaten and bullied again.

I also really felt for Melanie in this final book, the way everyone looks to her for the answers and the leadership. The amount of pressure she puts herself under is immense and then when a dearly loved character and member of her group whom she considers family is brutally murdered and she immediately blames herself and second guesses all her actions that led up to the sad event.

I really loved the horrible character of Sue Ellen and the book really had me routing for Melanie and her group to succeed in escaping the Wolverine Militia. Sue Ellen is so determined and vengeful against Melanie and her group as they are standing between her and her son. I honestly think that even if Nathan gave himself over to his mother that she would still have hunted the group that had become his family down and killed them all just to prove a point. She has the mentality of if she can’t have what she wants no one else can.

Rita continues to prove her worth in this book too, I honestly laughed out loud at a certain scene in the book where she is enjoying herself using missiles and blowing things up from inside the tank that belonged to Sue Ellen. The group find themselves backed into a corner on numerous occasions in the book and suddenly one of them will come up with a solution or idea at the last possible moment. Mark is still recovering from his injury in this book but he certainly doesn’t let it hold him back and grits his teeth and gets on with what needs doing on more than one occasion.

Another scene I absolutely adored in the book was when the group were fleeing through the forest in an attempt to lose the Wolverine Militia is when the group are hungry and saying if only, they could shoot a rabbit, or trap one but they cannot due to the need for no noise and no spare time. Lizzy becomes the unlikely huntress by throwing a stone at the rabbit and killing it humanely in just one shot! No noise, no fuss and no time wasted and though there isn’t much from one rabbit being shared through the group it is gratefully eaten and Lizzy seems to shine from the praise. Lizzy may have started out this series as a timid young woman, but by the end she is a valued contributor of the group.

I don’t want to go into detail about what happens or how it happens but it turns out cutting off the right people in the militia has the affect of calming things somewhat. The remaining survivors of the battle agree to go their own way and not interfere with each other anymore.

My thoughts upon finishing this book, were that not only this book but the whole series is action packed and follows a group of everyday people learning how to survive as they go along. In fact, the only character within the group with any prepper type knowledge is Nathan. He certainly proves himself and an invaluable member of the group who is important to its future survival. Despite never looking for trouble and really only wanting a quiet life trouble continues to find the group. There are many sad losses during the whole series, characters that were assets to the group and if not biologically related still like members of the family group as a whole. Bonds between the members of this small group grow stronger with every hardship and danger they find themselves having to face. They continue to protect their small family and become a tight group who will do whatever needs to be done to stay together safely and continue to strive to hopefully thrive in the new harsher world they find themselves in.

Summing up, I really hated having to put it down. I found myself regularly reading into the early hours, or sneaking an extra hour in here and there reading. I definitely recommend this series for fans of post-apocalyptic fiction.