REVIEW - THE MOVEMENT BY PETRA HULOVA 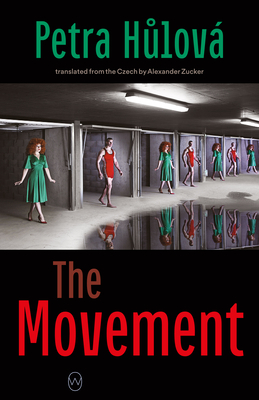 BLURB from Goodreads
The Movement's founding ideology emphasizes that women should be valued for their inner qualities, spirit, and character, and not for their physical attributes. Men have been forbidden to be attracted to women on the basis of their bodies. Some continue with unreformed attitudes but many submit--or are sent by their wives and daughters--to the Institute for internment and reeducation. However, the Movement also struggles with women and their "old attitudes," with many still undergoing illegal cosmetic surgeries and wearing makeup. Our narrator, an unapologetic guard at one of these reeducation facilities, describes how the Movement started, the challenges faced, her own personal journey, and what happens when a program fails. She is convinced the Movement is nearing its final victory--a time when everybody falls in line with its ideals. Outspoken, ambiguous, and terrifying, this socio-critical satire of our sexual norms sets the reader firmly outside of their comfort zone.

REVIEW
It was the cover of the book which first attracted my attention, then I read the blurb and wanted to read it straightaway.

The blurb immediately made me think of Margaret Attwood’s Handmaid’s Tale, but a reversal of the situation with women being in charge. Men being the one’s treat as the lower class, the ones that are wrong. It was also quite a feasible storyline in a futuristic world. I think most women have been sexually objectified in one way or another on more than one occasion. This book felt especially relevant with news articles about women being followed and murdered etc. I was looking forward to a society where women were in control for a change, having the upper hand and re-educating men about where they are going wrong.
The book describes how “The Movement” first began, how it has grown and how it developed into what it is in the “present day” within the book, with large facilities dedicated to re-educating men.

The book is told from point of view of one of the women workers, a guard at one of the larger re-education centres as she goes about her job. She tells the reader about the facility she works in, how it looks, where the males live whilst there in dormitory style rooms, though there are some smaller and single occupancy rooms too. The guard describes her surroundings, where she resides within the building, what she does in her spare time, as well as what her work entails. There are set tasks the men have to work through to gain more luxuries/freedoms and take steps to be being “graduating” as reformed. There are craft and hobby tasks for the men’s free time when they are not in specific classes or counselling sessions. The facility has open days where women can visit and take a look around before enrolling their husbands, partners or male relatives there. It isn’t a free solution, the women/men pay for the service that The Movement supply.

I started the book, interested in what to me, had seemed an intriguing, futuristic society. I managed to read around 30% of the book before the language and descriptions of “therapies” the men endured and had to react, or in some cases not react to pass and progress. I am not a prude and it wasn’t really just the explicit language and descriptions that put me off as much as the monotonous of the book. There wasn’t enough plot, or anything it just seemed fixated on the men’s reactions to different images of women of different ages and dressed in different ways.

I put the book down and went off and read others and then returned to give this book another try on at least three occasions before I finally decided I just couldn’t force myself to read any more of this book. It was frustrating that the female guard didn’t have a name revealed to perhaps humanise her a bit. At times both she and the book felt robotic.

I would have much preferred to have had more of the story of the earlier days of the Movement and the women involved in that, with perhaps stories of how the first men were re-educated. As well as what had happened in the world to encourage and accept such institutions being built.

I was disappointed to not continue reading the book to the end but there comes a point when you know no matter how many times you try to read a book you just are just not going to be able to wade through it. I honestly can’t foresee myself ever going back to it and finishing it at all. I read that the book has been translated from another language so perhaps some of the flow of the plot.

Summing up, I seriously had high hopes for this book imagining some equivalent institution, perhaps comparable to that of the handmaids training centre in Margaret Attwoods book. This book just felt like it was going on and on, repeating and labouring the same point. Some of the scenes told in excruciatingly detailed ways. Sadly this book just wasn’t what I had thought it may be and didn’t improve enough to continue reading or continue to revisit anymore.