A CHAT WITH MARY HART PERRY 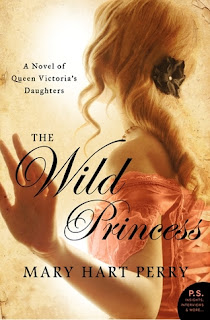 My name is Kathryn Johnson, and I'm currently writing under a new pen name Mary Hart Perry because this is a totally different sort of novel for me. I love history. And I love adventure stories and romance. So I've combined all of these elements into novels that are romantic Victorian thrillers. I'm very excited about these new books starting with the first of a series that features the daughters of Queen Victoria. The Wild Princess will launch on July 31 of this year.
I grew up in Massachusetts and I've lived in many places across the United States as well as in Europe. Texas, Connecticut, Maryland and Italy have been some of my homes. I currently live in the Washington DC area. And no I didn't always want to be a writer. When I was in school I thought that writing was really hard work, so if I had a choice I would always choose to take a multiple choice test instead of writing an essay or paper. But once I learned how much fun it was to write fiction, to develop characters and adventures for them, I was hooked.
In The Wild Princess we meet Queen Victoria's fourth daughter, Princess Louise, who later became the Duchess of Argyll. She was the Queen's daughter who dared to buck society's system by demanding her right to an education that was equal to a man's. She wanted to become a professional artist at a time when girls simply were not trained for that sort of career. In fact they weren't supposed to have careers at al,l particularly if they were born into a Royal family or upper class. Louise got her wish and was trained at the Kensington art school in London. But there have always been rumors and gossip about her wild years carousing with the young people she met who were, of course, commoners. In those days royalty did not mix with ordinary people.
You asked if I had favorite authors when I was growing up. I did. I read a lot of Nancy Drew mysteries and also Arthur Conan Doyle's wonderful mysteries starring Sherlock Holmes. Doyle's mysteries in particular had a very strong effect on me. I think you'll see that when you read The Wild Princess. The gritty, foggy London atmosphere shows through in the scenes that I've written. And I've tried to include as many period details as possible so that the reader will feel as if she really is there walking the streets of London in the 19th century.
Do I see more books in the future? I sure do. As long as my readers enjoy this first book of the series, I will continue writing more. In fact I'm already well into the writing process for the second book, which features Louise's baby sister, Beatrice. Beatrice, being the youngest, was expected by her mother to stay unwed and by her side until her death. It is a lot to ask of any young woman, particularly one who has fallen in love. So I hope my readers will not only enjoy the first book, but will stay with me to find out what happened to Beatrice and the young man she fell for, and who cherished her.
Well, I have to get back to my writing now. But if you'd like to know more about any of my books, and maybe even pick up writing tips that you can use if you are interested in writing fiction, here are some places you can go to find me. My very best wishes to you, Kathryn
Twitter: @Mary_Hart_Perry
Facebook: Kathryn Kimball Johnson
or  Mary Hart Perry
www.MaryHartPerry.com