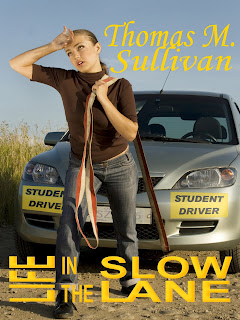 BLURB from Amazon.co.uk
Being an instructor for a private driver's ed company sounded like the launch of  a career that would last a lifetime. Not! During his short stint in the instructor's seat, Sullivan learned more than he wanted about poorly maintained cars, calm kids with angry parents, inefficient efficiency campaigns, too-rapid business expansion, and suburban angst. Oh, yes, and a bit about mustaches.An irreverent account of one man's descent from hope to a struggle to escape the chaos of subprime suburbia, Life in the Slow Lane celebrates the humor, resolve, and intelligence teenagers use to survive the dysfunctional world their elders have created.

What is your name, where were you born and where do you live now?
Thomas Sullivan. I grew up in Hartford, Connecticut and now live in Seattle, WA

What is the name of your latest book, and if you had to summarise it in less than 20 words what would you say?
My book Life In The Slow Lane is a humor memoir about teaching teenagers to drive in a frantic, booming suburb of Portland, Oregon.
Do you have a favourite character from your books? and why are they your favourite?
I had a student who was a boarder from Africa. She had no experience driving, trouble understanding English, and a knack for forgetting things. Every time we when out on the road something bizarre happened, and our lessons resembled an accidental discharge from a handgun. But she kept at it with real determination when other people might have quit. So, she was funny and inspiring in an unusual way.
Did it take a long time to get your first book published?
It took me about a year to find a publisher. It was a year of many, many submissions to literary agents and publishers. I actually had one agent write “I’m not sure why I want to look at this, but send a sample to me.” Eventually I found my publisher(s) through direct submissions.

Who is your publisher? or do you self publish?
I have two publishers. Uncial Press (a small press in Oregon) first published Slow Lane as an ebook. A bit later Cool Beat Audio Books (a small audio press in Florida) released a condensed version of the story as an audio book. It’s narrated by Skip Mahaffey, a very funny and talented radio personality in Florida.

How long does it usually take you to write a book, from the original idea to finishing writing it?
It varies. In doing Slow Lane, I wrote mostly during the “down time” between lessons (or when a kid didn’t show up or a car died and a lesson got canceled). I finished it up after leaving the job. So in total, it took about two years to do an initial draft.

Do you have plans for a new book? Is this book part of a series?
I have a collection of nonfiction humor essays that I hope to publish at some point. They cover a variety of everyday topics (not driving related) and a number of them have appeared in online journals.

Do you have anybody read your books and give you reviews before you officially release them? ie. Your partner, children, friends, reviewers you know?
This is a good question because it’s something newer writers (like me) tend to overlook. We want to get something “out the door” to an agent or publisher. But having a few people with editorial backgrounds and insight to the publishing process read over a book is essential. I shy away from close people (ie partner, children, friends) reading a work because I think they’re too close to be impartial. But the more initial readers the better.

Do you gift books to readers to do reviews?
Yes. It’s easier and more affordable in digital formats than print. But I think this is a good idea regardless of the format.

Is there a certain Author that influenced you in writing?
I like authors who write in a way that resembles no one else, whose style is unique. The two that fit the bill for me are Chuck Palahniuk and Helen Dewitt.
Do you think ebooks will ever totally replace printed books?
Vinyl records (both new and used) are surging at my local record store. It makes me think that print books may shrink in popularity but will never go away.

What piece of advice would you give to a new writer?
Rejections from journals, publishers, agents mean nothing about the quality of your writing. All writing will interest someone, and getting rejected by Person A just allows you to find Person B who loves what you have created.

And any other information you wish to supply:
Readers can hear a few funny excerpts from the audiobook version of Slow Lane at:
http://www.prx.org/p/71515