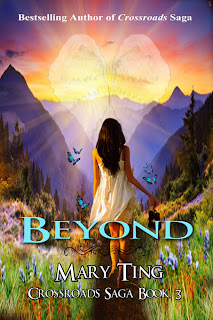 
Torn between the past she can't remember and a future she isn’t ready for, Claudia feels at a loss. With unanswered questions, she is certain there is more to her past than just being a venator. Finding the missing pieces in her life won’t be easy because duty calls. When mysterious dark shadows get released, an apocalypse sets in motion. The venators and the alkins must work together once again. Knowing Claudia would be the key to destroying the demons that were released, a familiar stranger appears to protect her. Drawn to the beautiful angel, Claudia finds she must unravel the mysteries of her past in order to help save the world. Who is the angel assisting her and why does she feel a strong connection to him? Time is running out. Will she discover all the secrets before it’s too late?

MY COVER OPINION
Well the cover has my favourite element from my favourite version of the book 1 cover, those beautiful white wings that form the heart shape, so I love that part. I also love the butterflies and the scenic view on the cover and the way Claudia is walking carefree through the grass.
I think the colours on the cover are welcoming and without giving away any spoilers at all are a good depiction of a certain place mentioned in the books. The whole light glowing through the wings makes me think of mystical beings and perhaps the "afterlife" somewhat too.
The colors on the book and the image of the heart shaped wings would certainly draw me to pick up the book and make me want to read the blurb.


And especially for you Crossroad Saga Fans out there, the lovely Mary Ting has supplied us privileged "Cover Revealers" with a selection Teasers for us to choose from to in turn Tease you with! the one I chose is below. I chose this one as it has my three favourite characters from the saga in it, Claudia, Michael and Austin.


Astounded to see Michael, Austin felt guilty for holding Claudia the way he was. Austin could do nothing but stare and didn’t realize the dark shadows were multiplying, coiling up his legs.
Michael’s eyes were full of concern and raced toward them with his sword. Austin thought he was overreacting with jealousy that he tosses Claudia into Michael’s arms, knowing he would catch her. Then he found himself unable to move his legs. He called out for his bow, but he couldn’t stop the shadows without shooting his own legs.