THE HUNTER AND THE HUNTED BY KELLEY ARMSTRONG 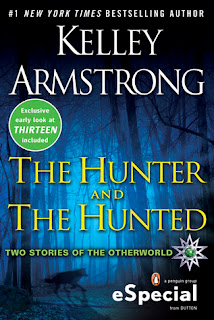 BLURB from Goodreads
In Off-Duty Angel , dark witch and half-demon Eve Levine is desperate for a little entertainment while her lover, Kristof Nast, is detained in afterlife court—enough to volunteer an extra week’s worth of angel corps duty just to pass the time. Luckily something even better comes up: a real celestial bounty-hunter mission to trail a shaman, someone who might prove to be a useful lead in Kristof’s court case. Following the target goes smoothly, until he leads Eve to the British Museum, where she inadvertently steps into a secret dimensional passage and stumbles upon a far more enticing puzzle . . . and a much greater danger.This collection also includes Stalked (Otherworld #7.3), previously printed in My Big Fat Supernatural Honeymoon.It’s not a good sign when Elena Michaels and Clayton Danvers resort to everyday activities on their long-awaited honeymoon in St. Louis. But their encroaching boredom is about to take a backseat to an unexpected threat that catches Clay’s attention. A non-pack werewolf is clearly stalking them—out to claim Elena for himself—and Clay has no intention of letting the upstart mutt spoil their romantic getaway, even if that means deceiving Elena as he pursues the rival werewolf on his own.Includes an exclusive early look at the first seven chapters of Thirteen, the Otherworld series finale coming July 24, 2012

MY REVIEW
I think the cover best represents Stalked  with the image of the wolf in the trees. Stalked is actually the first novella in this e-special. As a Kelley Armstrong fan I love anything at all with Clay and Elena in it. Even though I have read this novella before within My Big Fat Supernatural Honeymoon.
Both Clay and Elena are on top form having their honeymoon both desperate to keep the other happy and not admit to being bored in St Louis. Everything is getting very boring for them until a stray mutt starts literally sniffing around, challenging Clay? Sniffing round Elena? You need to read the novella to find out. I will say it is classic Clay & Elena and I  doubt you will be disappointed!

The second novella in this e-special is Off-Duty Angel which feature Eve Levine and Kristoff Nast. Eve is bored as she is "Off-Duty" and Kristoff is hard at work at court. After trying to do a bargain with the fates doesn't work as she wishes Eve sets off trying to help Karl with a mystery involving his present case. Is Eve on the right case? Is it a set up? Or has Eve stumbled upon something bigger than she can Eve suspect? Again this one is totally Eve, in like a bull in a china shop wanting to sort everything and everybody out. I love the character of Eve too and feel she wasn't seen enough in the Women Of the Otherworld Series as much as I would have liked so this novella was a bonus for me.

This e-special also contains an exclusive early look at the first seven chapters of Thiteen, the Otherworld series finale, which I decided not to read as I am not up to that book yet in my Kelley Armstrong library of books so didn't want to spoil my future reading.

So did I enjoy the two novellas? YES! Would I read more? YES Would I recommend? I always do recommend Kelley Armstrong!

Buy Link for The Hunter and the Hunted