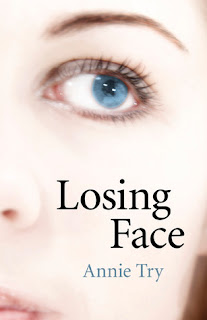 What is your name, where were you born and where do you live now?
I am Annie (Angela) Try, I was born in Beckenham, Kent, UK and now live in West Norfolk. ‘Try’ is my maiden name, I use it for writing fiction and poetry.

Did you always want to be a writer?
When I was a child, I thought my elder sister would be a musician, my younger sister an artist and I would be a writer.  We all followed different careers (education, education and psychology) but as we grow older we are reverting!  I have scribbled odd bits all through my life, but only had anything published through my work as a clinical psychologist, until now.

What is the name of your latest book and can it be summarised in less than 20 words?
‘Losing Face’
Friendship overcomes tragedy, distress and loss when Em helps Cass rediscover her identity and courage, after a devastating accident.

Who is your publisher?
Losing Face is published by John Hunt Publishing through the imprint Roundfire Books, ISBN 976-1-78099-119-1.

What can we expect from you in the future?
I have nearly finished the first draft of the sequel to Losing Face, which is mostly Em’s story.  I have three other novels on the go – all are fairly psychological in nature, one is sci-fi and the other two both have a mystery to be solved.
Ooo I want to read that one! I really liked both girls in this book, they showed us a great example of true friendship.

Do you have a favourite character from your books?
I think Em is my favourite character.  I loved writing her – she seems to have the knack of getting into trouble and she says what she thinks.  In some ways she is quite the opposite of Cass.

If you had to choose to be one of your characters in your book, which would you be? And why?
Probably Cass, because she thinks more like me.  She has a spiritual side to her and wants to do what is right.  Although maybe Em is the naughty child I never became!

Do you decide on character traits before writing the book or as you go along?
I usually sketch out my characters in the early stages of writing.  For this novel, I wanted two opposites, who were firm friends and who both had difficult issues to tackle.  As I wrote the book, their characters developed until they almost drove the plot along.  It became easy to think ‘How would she react?’, ‘What would she do next?’ and know the answers.

Where do you get your book plot ideas from? What/who is your inspiration?
I went to a seminar at a psychology conference on working with children with facial disfigurement.  I was appalled at the lack of fiction available for girls.  By the time I had driven home, I was bursting with ideas for the novel.  At the time I was working for an MA in Creative Writing, so I ditched the novel that I had started and went for LF instead.

Have you ever based characters on people you know or based events on things that have happened to you?
I have been very careful not to use people I know but I have drawn on my own experience.  For example, the sensations from the crash at the beginning of the book are remembered from an accident I was involved in several years ago, although thankfully we were all wearing seatbelts and no-one suffered bad injuries.

Are there any hidden morals or messages in your novel?
Yes, but not well hidden!  I want readers to be aware of the difficulties encountered by those who look or are different in some way.  It would be good if readers were encouraged to realise that adversity can be overcome.  Even when lives are changed in dreadful ways, there is still hope for the future.
I think its an important issue to raise awareness for, and your book does it so well, I think it should be put on the school curriculum!

Are there any new authors you are interested in for us to watch out for?
Definitely watch out for Megan Taylor, who has now written three novels ‘When we were lost’, ‘The Dawning’ and ‘The Life of Ghosts’.  She is a tremendous writer who uses beautiful language and imagery whilst her stories are full of suspense and totally enthralling.  I have no idea why she isn’t already in the bestseller list.

What piece of advice would you give to a new writer?
Have fun, experiment, find your voice.  Then when you have written your tale, review, edit, review, edit and work on it until it is the beautifully-crafted novel, poem or short story that you dreamt it would be.  And be prepared to have no time for writing when you are promoting your book – sorry, that’s rather more than one piece of advice.

Thank you for taking the time from your writing schedule to take part in this interview. I am now looking forward to reading more of Em's story too.