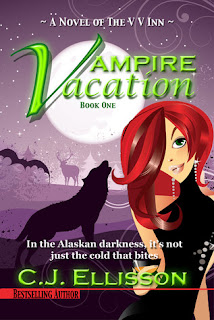 
BLURB from Goodreads
Meet Vivian. She's a 580-year-old vampire who exudes sex, has a talent for drama, and is passionate about two things: her human husband, Rafe, and their resort for the undead. Her ability to project physical illusions has created the perfect vacation spot a dark, isolated Alaskan hideaway where visitors can have their wildest fantasies come true.Vivian knows the best performance requires perfect timing, but the powerful vamp is put to the test when she discovers a corpse in a locked guestroom minutes before the next arrivals. Always cool-headed, Rafe hides the body, convinced he and Vivian can find the culprit without disturbing their guests.Juggling the increasingly outrageous demands of their customers while tracking a killer isn't easy. Will their poking and prodding give them the answers they need, or will it uncover secrets Vivian would kill to protect?Warning: This story contains some explicit sex scenes and is not intended for readers under 18.


MY REVIEW
I really love the cover, and the byline "In the Alaskan darkness it's not just the cold that bites"  Firstly I will point out that this book is rather racy and steamy in parts, so is not for the under 18's. To be totally honest if I had known how explicit the sex scenes were I most probably wouldn't have read it. I enjoyed the story and plot of the book a lot and think the book could have got by without as much of the explicit scenes within it. I do actually say in my reviewing policy that I don't review erotica and this book pushed me to that very line, I am not a prude but prefer more plot and story than racy sex scenes. i know some people wish to read this sort of thing, it just isn't my preference.
Actually ignoring the sex scenes the book is really well written and enjoyable to read, it has suspense, mystery and murder mixed in with some humour too.
The characters are well thought out and though most are of different races they seem to fit together like their very own version of a pack. I like that Dria/Vivian is a strong female character too and that her husband is the weaker in the relationship yet he is still a strong male character and would give his life for Dria/Vivian. In fact most of the workers have a very strong loyalty towards Dria/Vivian and not just because of the unusual added ingredients to that water (you'll understand when you read the book!)
So did I enjoy the book? Hmm I would have to say despite the sex scenes yes I did. Would I recommend? To readers over 18+ only. Would I read more of this series? As I have committed to reviewing already, probably yes. Also Bk2 seems like it could be more plot less emphasis on the sex scenes. Would I read more by C. J. Ellison? If not as explicit, then yes.

Free Short Story and half of Book One: Just One Taste
Book One: Vampire Vacation
Free Read containing half of Book Two: Another Sip
Book Two: The Hunt
Book Three: Big Game
Novella: Death's Servant (Jonathan's story, due out Summer 2012)
Book Four: The Seduction of Death (due out December 2012)
Posted by Jeanz xx at 11:00