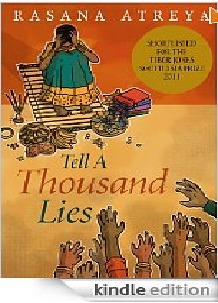 
BLURB from Goodreads
In a culture where skin colour can determine one's destiny, fraternal twins PULLAMMA and LATA are about to embark on a journey that will tear their lives apart.Dark skinned Pullamma dreams of being a wife. She is aware that with three girls in the family, there isn't enough dowry to go around. But a girl can hope. She's well versed in cooking, pickle making, cow washing -- you name it. She's also obliged her old-fashioned grandmother by not doing well in school. As the sixteen year old helps ready the house for her older sister's bride viewing, she prays for a positive outcome to the event. What happens next is so inconceivable that it will shape Pullamma's future in ways she couldn't have foreseen.Fair skinned and pretty, Lata would rather study medicine. Unable to grasp the depth of Lata's desire, Grandma formalizes a wedding alliance for the girl. Distraught, Lata rebels. She ends up pregnant. The ensuing scandal forces her into marriage.Lata ends up poor, uneducated and married to a man she cannot abide. Pullamma, meanwhile, is living Lata's dream -- she is rich, powerful, and married to a good man. The only hitch, from Pullamma's point of view, is that she cannot acknowledge her husband in public. And, oh, the fact that superstitious villagers think she is Goddess.

I was sent this e-book from the author Rasana Atreya in exchange for an honest review and my opinion on it.
I liked the cover though it was quite a way into the book before I recognised the cover as a scene from the book.the scene depicts Pullama as a rather unwilling Goddess, with the gifts people have brought to her as gifts for her blessing. Also all the hands stretching out towards Pullamma demanding her attention.
I found the beginning of the book rather slow to read, then about 18% the story pace started to pick up and become faster so more enjoyable. I loved all the cultural references even though some of them seemed really alien to me and a little odd. One in particular, which is also the title of the book is "Tell a Thousand Lies" to marry off your daughter as a bride.
Pullamma's mother is dead and her father has literally run off with other women leaving her mother's mother to bring them up, provide dowry's and marry them off to suitable matches.

Pullamma is kind of classed as the ugly duckling of the family as her skin is so dark so she is expected to possibly remain single and never make much progress in life. Lata is Pullamma's twin and more or less opposite, she's clever and dreams of becoming a Doctor one day, someone important, who will be looked up to and given much respect. Malli is the other more placid sister.
The story covers Malli's marriage and how a corrupt politician uses Pullamma, having her declared a goddess.He gives her power but can just so very easily take that and everything else away from her too. He never lets her forget the power he has over her and her family.
Pullamma escapes his clutches many times, but ends up being dragged back.On one occasion she returns to help her sister Lata, who has disgraced herself. Pullamma faces many difficult choices and situations, at times she suffer indescribable hurt and heartbreak.
This book is a great example of how fortunes and futures can change on the wind. It is a tale of courage, determination and never ending unconditional love. However it also has its fair share of prejudice, racism within the community, violence, deception and hurt.
I do not wish to give away more of the story, but I really would recommend this book as a really great read. i have to say personally it would make a great movie, or TV mini-drama. this book gives a deep insight into a totally different culture and explains the reasoning behind the culture as it goes along.
So did I enjoy it? Yes, I truthfully did. Would I recommend? Yes to a serious reader.someone who loves books and likes to learn a little whilst reading too. Would I read more by Rasana Atreya?Yes I would.

*Please note the sensitive subject of miscarriage is mentioned in this book*
Posted by Jeanz xx at 11:30