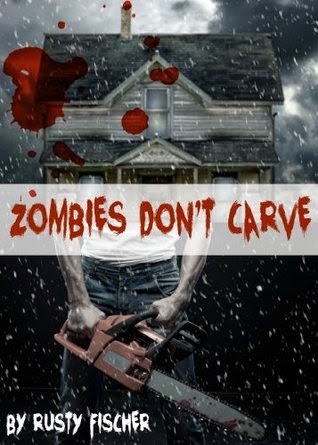 BLURB from Goodreads
Guess who's coming to Christmas dinner? ZOMBIES!!!! April Kersey has finally decided to introduce her new boyfriend, Echo, to her family. On Christmas Eve. At the big family dinner table, with everyone dressed in their finest ugly Christmas sweater. As if that wasn’t bad enough, did I mention… he’s a zombie? Echo’s status as one of the living dead doesn’t sit too well with April’s Dad. That is, until an all-out zombie infestation begins making its way toward the Kersey’s holiday celebration. When Echo rises to defend his adopted family from the zombie horde, the Kerseys join in to make it a holiday they’ll never forget. That is, if they survive…

INITIAL THOUGHTS
I'll be totally honest this authors books along with Daniel Waters books that introduced me to zombie fiction, so I do enjoy Rusty Fischer's book, hence I was looking forward to a good quality quick read.

MY REVIEW
I downloaded this one from Amazon UK for just 77p. I made a conscious decision this year to try and read more Christmas themed books. The cover split into two halves. The top half shows us what  I would say is April Kersey's home, the one she has invited her "living dead" boyfriend Echo to dinner at.  The bottom half of the cover shows the lover half of the body of Echo brandishing a hedge trimmer. The cover is also spattered with blood. (Yuck, but a good yuck lol) Would the cover make me pick this one up in a book store? Yes, having "Zombie" in the title would pique my interest, and then the fact Rusty is the author would make me take it to the till to buy!
So I should start by saying this one is a novella. The main gist of the story is that April has decided to take the rather large and possibly awkward step of taking her "living dead" boyfriend to dinner with her family who have yet to meet him. Her father is definitely "zombiest" ie. rather against his daughter dating a zombie/living dead. During the dinner, April's mother, Trudy tries really hard perhaps overly so to make Echo feel welcome. To one point within the meal, Trudy asks for a taste of Echo's brain paté. Roger Kersey admonishes his wife and they are about to go into an argument when the TV programme is interrupted to announce that zombies have broken through the borders. The broadcast suggest people should head to their "safe rooms" and wait out the zombie attack. However not all the family go in the safe room. I won't say which one is the only one to go into the safe room to hide. I also don't want to say much more or I will give spoilers.
The novella is amusing in that we discover that both Echo & April regularly fight the zombies quite fearlessly, yet are scared about the Kersey family reaction to the fact that April and Echo are having a relationship. The character of Zack is funny as he asks all those awkward questions without a shred of embarrassment that his parents, Trudy and Roger probably want to know the answers to.
Did I enjoy the novella? Yes it was a quick, easy read. Would I recommend the novella? If you want a quick novella yes.  Would I want to read more about Echo & April & the rest of the Kersey family?  I would yes, I want more adventures from Echo & April. I would also like to learn more about the other Kersey's. I think Zack would be great and you can really imagining him fighting off the rogue zombies.  Would I want to read other titles by Rusty Fischer? I already have read some other titles by Rusty Fischer, but do intend to read more.
Posted by Jeanz xx at 03:00