REVIEW - THE BLACKSMITH - TALES FROM THE GRAVEYARD BY SUSAN SHULTZ 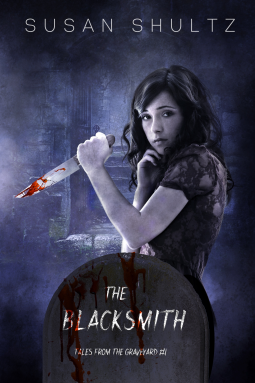 BLURB from Goodreads
My name is Ainsley. I live among the dead.Meet Ainsley. Ainsley lives alone, and she likes it that way. Ainsley has some secrets. Dark secrets.Sometimes, Ainsley feels like the Blacksmith is the only one who will ever understand her. The Blacksmith resides in the graveyard in her garden. You see, Ainsley’s heart was broken long ago, and now it’s dead. As dead as the Blacksmith’s. They belong together.Then there’s Sam: sweet, loving Sam. Ainsley was abandoned by anyone she ever loved, but Sam has always been there. If her heart weren’t already dead, Ainsley might even say she loved him.Not even Sam knows the depth’s of Ainsley’s darkness…and lately, she’s come very, very close to revealing it to him.But the Blacksmith says no. And what the Blacksmith says, goes.

INITIAL THOUGHTS
I'm not so sure what I  was expecting from this novella, I don't usually read the "horror" genre. but I kind of fancied a change, so thought I'd give this novella a try.

MY REVIEW
I downloaded this one from Netgalley in exchange for my honest review. The cover depicts the main character of Ainsley, in the graveyard at the back of her house. In her hand is a dagger/knife with blood on it. The expression of the girl who is depicting Ainsley is so innocent, and naive which is the totally opposite to what you go on to read about her in the novella. So would the cover make me pick this novella up from a book store shelf? Yes, I would want to know more about the naive, childlike female on the cover holding the knife covered in blood.
The female on the cover is the main character involved in this book, her name is Ainsley.  Ainsley had a quite a sad beginning to her life, her father abandoned her and her mother, which then caused Ainsley's mother to commit suicide. This left Ainsley to be brought up by her grandmother, and so when her grandmother passes away she leaves her house to Ainsley. The house is quite imposing as I visualize it, it has a graveyard at the back of the property which Ainsley refers to as her "garden".  Ainsley tends her garden, speaking to those buried in the graveyard as she works away. Ainsley remember's her grandmother telling her the stories of the people buried there. One story that Ainsley retells us within the novella is of a young woman, who marries her ideal man, they go on to have a child, you'd think everything would be perfect? but alas no this young woman's mother-in-law takes a dislike to her and basically sabotages her cooking, cleaning etc. She literally tries to turn her son against his bride. Even when the young couple have a child, the mother-in-law is still trying to invade their lives and rule her son. The rumour say's that the young woman is so tired she falls asleep straight after placing her baby to bed. The gossip then goes on to insinuate that the mother-in-law places a pillow over the small baby and kills it. This then obviously distresses the young woman so much she dies. then the mother-in-law has what she wanted all along, her son to herself. When Ainsley goes to the graveyard she talks to the dead.
There are two sides to Ainsley, the quiet conservatively dressed library worker, and the girl she changes into at night when she dresses up in short black skirts, lacy tops and bright red underwear. This Ainsley goes out with one purpose in mind. . . to lure a man back to her home and kill him and consume parts of him including his blood and heart. She then buries what is left of them in the graveyard. You see Ainsley needs to consume their blood and more importantly their hearts as her heart doesn't work, it doesn't beat, the only time she feels warmth is when she has killed and devoured the hearts. The one that tells Ainsley when it is time to kill again is the spirit of The Blacksmith. Ainsley has asked why but he orders her to continue. Ainsley cannot feel true love. The only one she has felt anything close to true love is Sam. Sam was at the same school, etc. The only person's opinion that Ainsley cares about is Sam's. So she feels somewhat mortified when Sam see's her whilst she is out luring men to their deaths. The two sides of Ainsley's life have ended up overlapping each other.
I don't really want to go any further details about the novella, as that would spoil the reading experience for you.
To say this is a novella, a lot happens within it. The novella has quite a deep, at times complex plot. I really enjoyed the interaction that Ainsley had with the young mother. I also liked the vast differences between the two opposite sides of Ainsley.
So did I enjoy the novella?  Yes, I really did, which was a little surprising as I usually avoid horror! This changed my opinion as I did enjoy it. Would I recommend the novella? Yes, I would recommend as a quick "all in one go" read because when I started this one I didn't want to put it down. I would also say give it a go even if you don't normally read horror. Would I want to read more in this series? I will certainly be keeping my eyes and ears open for the next installment of Tales From The Graveyard. Maybe we will learn more about Ainsley's grandmother, or will the tale be centred around Sam? Perhap's the epilogue of this novella is setting the scene for the next one? I'm definitely interested in reading more in this series. Would I read other titles by Susan Shultz? Yes, I would, I'd be interested in checking out the Spinetingler's Anthology that susan has a story in. I think I would also be interested in her book titled, Things To Do On The Otherside.
Posted by Jeanz xx at 14:00