Fusion contains nine outstanding fantasy stories merged together to create a bestselling reaction. An anthology designed for readers of fantasy . . . Paranormal, urban/contemporary fantasy, science fiction and dystopian fused together in one epic fantasy bundle. Make your way through fire and ice, love, lust and hate as these nine International Bestselling Authors come together to spin their tales of magic and destruction. This is a truly unique bundle that successfully blends all aspects of the Fantasy genre. 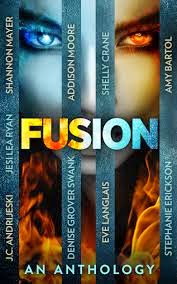 ELEMENTALLY PRICELESS
an EXCLUSIVE Novella by SHANNON MAYER
My name is Rylee, and I am a Tracker." A missing child, a deadly prophecy, and a world of unusual supernaturals slam together in this EXCLUSIVE novella from Shannon Mayer. Meet Rylee, a Tracker of missing children, and Lark, an Earth Elemental as they tackle a case neither could crack on their own dodging the world of the supernatural and FBI alike. Separate, they are deadly, strong, and determined. Together, they are unstoppable. Or so they think.

(Celestra Series, Book 1) by ADDISON MOORE
The Celestra Series has been optioned for film by 20th CENTURY FOX Sixteen year-old, Skyla Messenger is a dead girl walking. With her life in upheaval, she finds refuge in Logan Oliver, a boy who shares her unique ability to read minds and has knowledge she desires. If only he would share. Skyla’s bloodlines to angelic beings may not be able to save her from those who want her dead, but Skyla is nowhere near done living --- and she’s not going down without a fight.

(On the Otherside Series, Book 1) by DENISE GROVER SWANK  Sixteen year old Julia Phillips buries herself in guilt after killing her best friend in a car accident. But guilt can’t explain how she can suddenly draw, has false memories of the accident and how a bracelet engraved with her name ended at the scene. Suddenly, Evan Whittaker is interested in her and her life. Why he was missing for two days and returns wearing a pendant she’s been drawing for months leads the two on a journey to find out how Monica is still alive and just where Even is really from.

I’m Evie and this was to be the making of me-my first year of college. I’d hoped that once I’d arrived at Crestwood, the nightmare that I’ve been having would go away. It hasn’t. At 17, I may be inexperienced, but I’m sane. When Reed is near, however, nothing makes any sense. He’s not what he seems to be…and neither am I. I’m afraid that the nightmare my dream is foretelling is…inescapable.

One life will make the difference. Macey Holsinger has heard that phrase her whole life, in the name of fighting a disease that has claimed so many lives. How much will she be willing to sacrifice in the name of the cure?

UPRISING
(A Collide Novel, Book 2) by SHELLY CRANE
Sherry and Merrick come face to face with old friends and new enemies in this sequel to Collide. When a little girl is found, things change for everyone and loyalties will be tested. New romances, drama and rivalries may upset the delicate balance they established while transformations on both sides of good and evil will arise as the series continues.

(Arcadia Series, Book 1) by JESI LEA RYAN
When teenager Arcadia Day wakes in a hospital after what can only be described as a psychic episode, she finds her family in tatters. As her home life crumbles and her emotional control slips away, she begins to suspect that her first psychic experience was just the beginning.

(Allie’s War, Early Years) by J.C. ANDRIJESKI
High in mountain caves, surrounded by kind-hearted monks, the shadow of the Rooks hangs over Revik’s head, a constant reminder of the dark warrior he used to be. When strange, militant Seers appear, asking for his help, his first impulse is to say no...until he learns it is Kali who needs saving… the one person he cannot refuse.

by EVE LANGLAIS
Evangeline is not a very nice witch, and she’s not afraid to show it. She lands a job where she is forced to work with a rude, cocky and totally unsuitable shifter. Despite it all, she can’t help craving his touch. When Ryker is partnered with the witch, he does everything he can to fight her allure. And fails. Vampires, a wedding from hell, and a cackling boss make this an action packed and humorous romance to remember.

Shannon Mayer lives in the southwestern tip of Canada with her husband, dog, cats, horse, and cows. When not writing she spends her time staring at immense amounts of rain, herding old people (similar to herding cats) and attempting to stay out of trouble. Especially that last is difficult for her. She is the author of the The Rylee Adamson Novels, The Nevermore Trilogy, A Celtic Legacy series and several contemporary romances. Please visit her website at http://www.shannonmayer.com for more information on her novels.

Addison Moore is a New York Times, USA Today, and Wall Street Journal bestselling author who writes contemporary and paranormal romance. Her work has been featured in Cosmopolitan Magazine. Previously she worked as a therapist on a locked psychiatric unit for nearly a decade. She resides on the West Coast with her husband, four wonderful children, and two dogs where she eats too much chocolate and stays up way too late. When she's not writing, she's reading. Addison’s Celestra Series has been optioned for film by 20th Century Fox.

New York Times and USA Today bestselling author Denise Grover Swank was born in Kansas City, Missouri and lived in the area until she was nineteen. Then she became a nomadic gypsy, living in five cities, four states and ten houses over the course of ten years before she moved back to her roots. She speaks English and smattering of Spanish and Chinese which she learned through an intensive Nick Jr. immersion period. Her hobbies include witty Facebook comments (in own her mind) and dancing in her kitchen with her children. (Quite badly if you believe her offspring.) Hidden talents include the gift of justification and the ability to drink massive amounts of caffeine and still fall asleep within two minutes. Her lack of the sense of smell allows her to perform many unspeakable tasks. She has six children and hasn't lost her sanity. Or so she leads you to believe. You can find out more about Denise at www.denisegroverswank.com or email her at DeniseGroverSwank@gmail.com.

Amy A. Bartol is the award-winning and bestselling author of the Premonition Series, which includes: Inescapable, Intuition, Indebted, Incendiary and Iniquity. She has also written the Kricket Series, which includes: Under Different Stars, Sea of Stars, and Darken the Stars. She lives in Michigan with her husband and two sons. Visit her at her website: http://www.amyabartol.com

Stephanie Erickson has always had a passion for the written word. She pursued her love of literature at Flagler College, in St. Augustine, FL, where she graduated with a BA in English Literature. She has received several honors in her writing career, including recognition in the 72nd Annual Writer's Digest Competition. After graduation, she married and followed her husband in pursuit of his dream. The Cure and The Blackout were written to reignite Stephanie's passion, when she found the time. Now that he is settled in his career, it's her turn to devote more time and energy into writing. Unseen, released in November, is her first book since she started writing full time. Stephanie has three projects planned for 2015. Her next release is well underway and is slated for a March, 2015 publication date, with the sequel to Unseen—Unforgiven—slated for release in July. Stephanie, of course, loves to read and write. She also enjoys living on the beach on Florida's Treasure Coast. Most of all, she and her husband are head over heels in love with their baby girl.

Shelly is a NEW YORK TIMES & USA TODAY bestselling author from a small town in Georgia and loves everything about the south. She is wife to a fantastical husband and stay-at-home mom to two boisterous and mischievous boys who keep her on her toes. She hoards paperbacks, devours sweet tea, searches year-round for candy corn, and loves to spend time with her family and friends, go out to eat at new restaurants, site-see in the new areas they travel to, listen to music, and, of course, loves to read, but doesn’t have much time to these days with all the characters filling her head begging to come out. Her own books happen by accident and she revels in the writing and imagination process. She doesn't go anywhere without her notepad for fear of an idea creeping up and not being able to write it down immediately, even in the middle of the night, where her best ideas are born.

Jesi Lea Ryan grew up in the Mississippi River town of Dubuque, IA. She holds bachelor degrees in creative writing and literature and a masters degree in business. She considers herself a well-rounded nerd who can spend hours on the internet researching things like British history, anthropology of ancient people, geography of random parts of the world, bad tattoos and the paranormal. She currently lives in Madison, WI with her husband and two exceptionally naughty kitties.

JC Andrijeski writes urban fantasy, dystopian and paranormal romance. Current works include the gritty, epic, urban fantasy series, Allie’s War, which follows Allie Taylor and her antihero partner, Revik, in their attempts to save the world from a dark, psychic force bent on controlling Earth. She also has a new adult dystopian series, Alien Apocalypse about Jet Tetsuo, survivor and slave under alien conquerors, and the Gate Shifter series, about a shape-shifting alien and a tough-girl PI. She also writes crime fiction, children’s and some literary under different names, although her first love will always be of the supernatural, especially when it involves kick-ass superpowers and people fighting for the light and against their own inner demons. JC currently lives and writes full time in Bangkok, Thailand, although she tends to get itchy feet on a fairly regular basis, so can’t quite commit to that as a final resting place...

Hello, my name is Eve and I am a Canadian author who pens steamy romance--usually with shapeshifters, cyborgs or aliens lol. I love to write, and while I don't always know what my mind is going to come up with next, I can promise it will be fun, probably humorous, and most of all romantic because I love a happily ever after. I look forward to seeing you again, whether online or between the pages of a book.

Huge Prize pack and signed paperbacks from the authors giveaway!
Ends 1/2/2015 at 11:59pm EST. Fill out the form below.