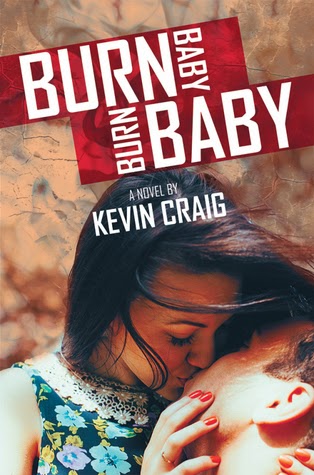 BLURB supplied by Curiosity Quills Press
Seventeen-year-old Francis Fripp’s confidence is practically non-existent since his abusive father drenched him in accelerant and threw a match at him eight years ago. Now badly scarred, Francis relies on his best friend Trig to protect him from the constant bullying doled out at the hands of his nemesis, Brandon Hayley—the unrelenting boy who gave him the dreaded nickname of Burn Baby.The new girl at school, Rachel Higgins, is the first to see past Francis’s pariah-inducing scars. If Brandon’s bullying doesn’t destroy him, Francis might experience life as a normal teenager for the first time in his life. He just has to avoid Brandon and convince himself he’s worthy of Rachel’s attentions. Sounds easy enough, but Francis himself has a hard time seeing past his scars. And Brandon is getting violently frustrated, as his attempts to bully Francis are constantly thwarted. Francis is in turmoil as he simultaneously rushes toward his first kiss and a possible violent end. 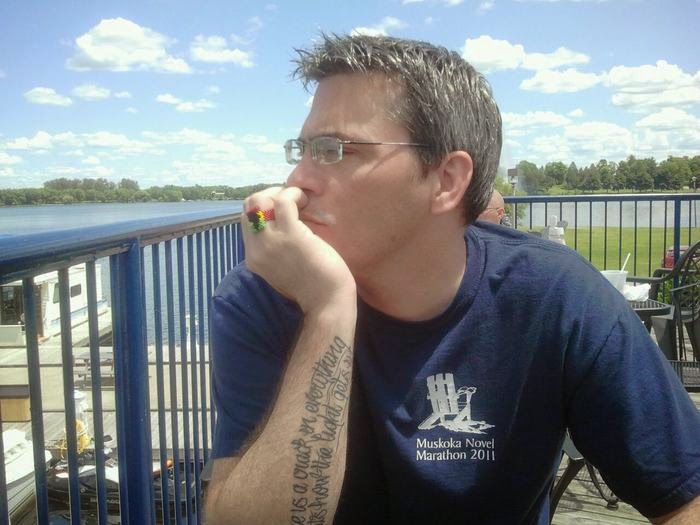 Kevin is the author of three published novels: Summer on Fire (MuseItUp Publishing, 2011),Sebastian’s Poet (Musa Publishing, 2012), and The Reasons (Musa Publishing, 2013). Kevin has two books being published in 2014. Both HALF DEAD AND FULLY BROKEN and BURN BABY, BURN BABY will be released in the Fall of 2014. Publisher for both books is CURIOSITY QUILLS.Kevin is a 4-time winner of the Muskoka Novel Marathon’s Best Novel Award. He is also a passionate and accomplished playwright. He's had five comedic plays produced. Kevin is a founding member on the Board of Directors for the Ontario Writers’ Conference. In 2013, they celebrate their 5th conference.

“Slow down, bud. Whoa. It’s me. It’s Trig. It’s okay.”
“Shit,” I say, finally coming out of it. “Sorry, Trig. I didn’t know.”
I sit up, attempt to get fully rid of the dining room and bring my bedroom back into focus. The galaxy is above me, right where it should be. Stars shining bright above me. Not the dining room ceiling.
“It’s okay,” he says. He stays on top of me. He’s pretty much pinning my legs down, but he’s no longer trying to catch my flailing arms. He knows I’m back. He’s been through this before. Lots. “It must have been a bad one. You were like a rodeo horse, man. I couldn’t hold you down.”
I reach for my feet, rub the bottoms and shiver, wrap my arms around myself before returning to my feet to see if they’re okay.
“I know which nightmare it was, anyway,” he says. He moves from on top of me and I can see him making his way through the dark to the light switch. “You were walking on the glass again, right?”
But I don’t have to answer him. He knows he’s right.
The light comes on and I shield my eyes from it. “Ah. Turn it off.”
“No. I want to know you’re okay.”
I keep shielding myself from the light, but my other hand is still absently checking the bottoms of my feet. No blood. But I can feel the scars. I can trace them with my finger. They’re lumpy, like ropes… almost like there’s still glass in there. Almost like it just happened while I was sleeping.
“Man.” Trig whistles through his teeth. “He screwed you over so badly. People could take lessons from your old man.”
“He was pretty good at what he did,” I say, laughing without humour. I look at him, and I’m pretty much shivering, still shaken by the dream. “Holy hell.”
I lie back down and take a deep breath.
“Do you want some water or something?” he asks. He’s like a mother hen when this happens. It’s so much better when he’s here. When he’s not, I’m still waiting for my father to make an appearance minutes after I wake myself up from the dream. When Trig’s here, I know my father can’t show up.
“I’m good. I’m just gonna go back to sleep.”
“Okay,” he says. “If you’re sure.”
He returns to the light switch.
“Can you leave it on, Trig?”
“Sure, bud.” He doesn’t even make fun of me. He just walks away from the switch and lies back down in the sleeping bag on the floor.
“Goodnight,” he says. I know he won’t go back to sleep. He will watch me sleep, stand vigil over me while I fall back into my dream-world. Be ready to drag me back out of another nightmare. That’s the kind of friend Trig is.
“Goodnight, Trig.”
Posted by Jeanz xx at 03:00