BOOK BLITZ - IF EVER I WOULD LEAVE YOU BY JESSICA JARMAN, BRONWYN GREEN & JENNY TROUT WRITING AS ABIGAIL BARNETTE 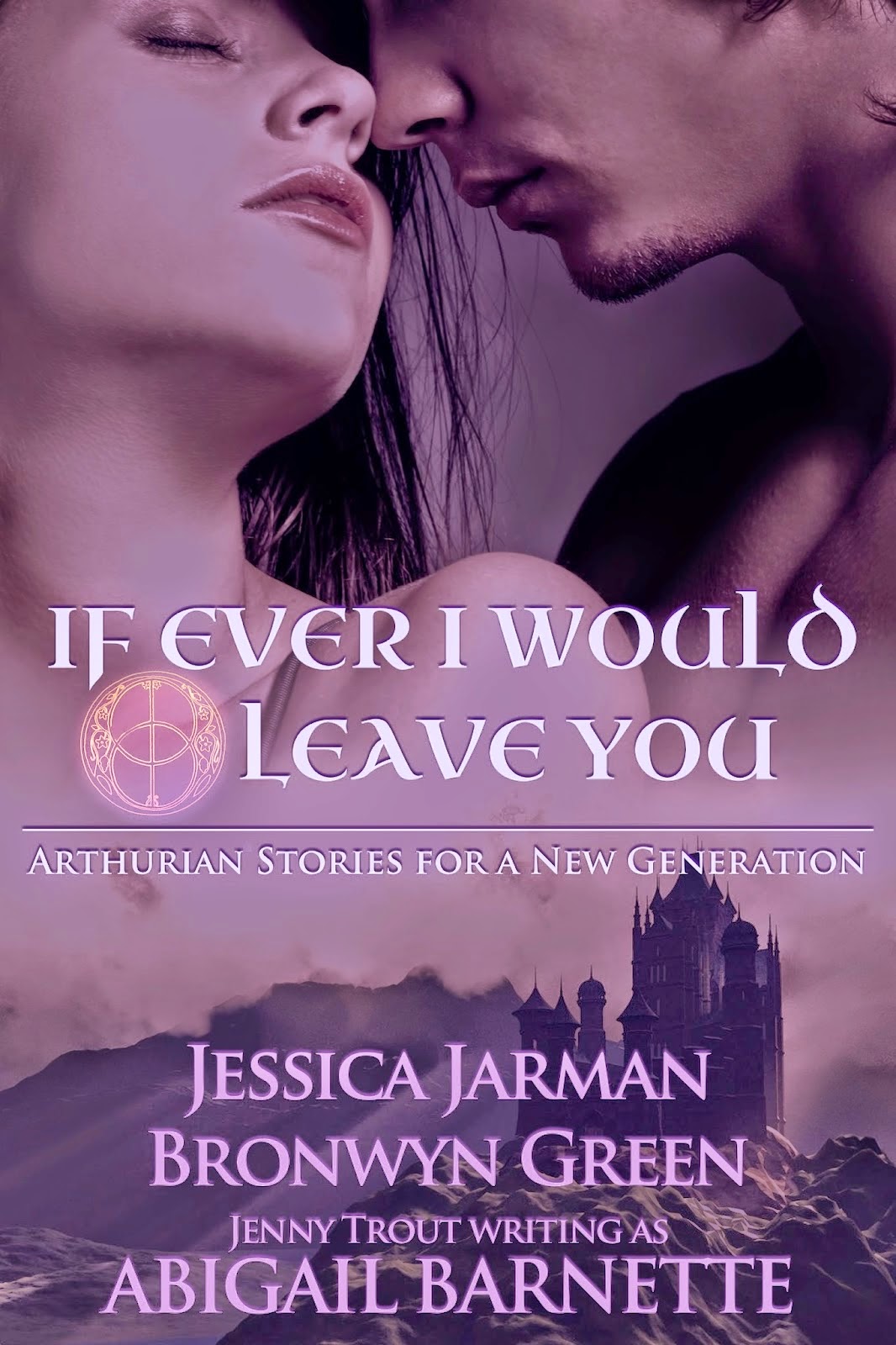 Title: If Ever I Would Leave You: Arthurian Stories For A New Generation
Authors:  Jessica Jarman, Bronwyn Green, Jenny Trout writing as Abigail Barnette
Release Date: 07/2014

A year after Tabby Nolan’s sister vanished from the Lake Michigan shore with her boyfriend, Liam, Tabby visits the spot where the two were last seen– and finds herself pulled into the crumbling world of Avalon.

Since his disappearance, Liam has been trapped in the mythical land, with no link to the world he knew. Now, their shared memories of Tabby’s missing sister are all they can cling to as Avalon dies around them.

But Tabby doesn’t want to be a replacement for her sister, and her growing attachment to Liam feels like a betrayal. As Avalon fades around them, Liam and Tabby must rely on each other– or be lost with the ancient kingdom forever.

For nineteen years, Anna has been plagued by dreams of lives lived only in legend. Finally free from the family that believed her hopeless and worthless, she’s ready to start her life over—alone.

When Anna meets an enigmatic stranger claiming to be the legendary wizard Merlin, she is forced to question the very reality she’s struggled to accept. With the mythic figures from her dreams intruding on her waking life, Anna learns that she’s been reborn to fight an ancient evil alongside King Arthur and his Knights of the Round Table.

Caught in an ages old conflict, Anna is the key to stopping a dark magic that will destroy the world—and Merlin wants to make sure that this time, Anna isn’t alone.

For perpetual overachiever Madison Lane, a summer studying Arthurian mythology in the Welsh countryside with professor Thomas Evans is a dream come true, and the adventure of a lifetime.

Of course, the enormous crush Madison developed on the professor after a semester of his lectures at U of M has absolutely nothing to do with her desire to learn more about the enduring legend of Camelot. At least, that’s what she’s telling her parents.

When Madison meets fellow student Rhys Crewe, sparks fly, throwing her plans for wild fling with Professor Evans completely out of whack—as do her unexpectedly complicated feelings for Thomas. With tales of Arthur and Lancelot haunting her every waking moment, Madison has to make the most difficult choice of her life.

I don’t know how long I sat there, shaking, trying to pull myself together. And failing miserably. Behind my closed lids, images flipped rapidly, almost too fast to distinguish one from another. Almost. But they were as familiar to me as my own reflection. I knew each and every one. Not just faces this time—though, they were there—but places, buildings, events all clouded my mind, tried to burrow in and refused to be shoved aside. It was fierce and brutal, as if these imaginings were fighting back for all times I’d tried to bury them or cut them out of my life.
It didn’t make sense. I shook my head and moaned as the movement sent a wave of pain through my body. God, why was this happening to me? Why was it getting worse? I knew what my mother would say. I’d stopped taking all the medications she and her army of doctors shoved at me my entire life. Well, I’d stopped years ago, so that wasn’t the reason. And those medications… I’d rather be dead than take them again. I felt dead when I was under their influence. That was the reason I’d stopped. I wanted to feel, to live, and they made that impossible. So, as soon as I’d left home, I threw out the pills and never looked back. Things had gotten bad then, but I learned how to deal with it and function normally—without killing everything that made me me.
At first, on my own, I did a lot of stupid things. Stupid, stupid things. All I wanted to do was feel—so I partied hard, drank more than my fair share, and took just about every drug I came across. Not my finest moments. I got over that real quick. Waking up every morning in a different bed with a different person, with no idea what I’d done… Not how I wanted to go through life.
After a time, I realized some sleeping pills to help me get a solid night’s sleep—a solid, dreamless night’s sleep—was all I really needed.
Until now apparently.
I fumbled with the zipper on my purse and started digging through the contents. My fingers closed around a bottle, and I looked at it resting in my palm. That was the problem. The pills weren’t working. Fucking Nate. I threw the unlabeled bottle back into the bag as anger joined the constant pain.
Nate was who I got the sleeping pills from. It was easier than trying to get a doctor to prescribe them—they always wanted to talk about why I wasn’t sleeping, and the hell if I was going there with anyone—and cheaper than paying for office visits and all that shit.
My breathing hitched as I felt solid steel at the bottom of my bag. I pulled out the pocketknife with trembling fingers.
The pills I’d gotten from Nate the other night were bad. They had to be. Because the alternative—that I was as crazy as my mother thought I was—couldn’t be. Could it? I wasn’t crazy. I pulled the blade of the knife open and fought against the bile surging up my throat.
I wasn’t crazy. Hitching up my skirt, I stared at my thighs, and the pale thin marks I kept hidden from the world. My vision blurred until I couldn’t see clearly, and I was biting back sob after sob. I couldn’t let Henry hear me. I needed to get control, so I could deal with Nate and his fucking shit-batch of pills.
I wasn’t crazy. I pressed the blade against my inner thigh. I still couldn’t see, but that was okay. I knew just how hard to push, how to drag the sharp tool slowly along my skin. My lids fluttered shut, and my breathing evened out as I felt the initial prick then the soothing sting.
I wasn’t crazy. I just needed to focus. And this…this brought me focus. This made things clear. I opened my eyes and watched crimson well up in thin lines, getting thicker and thicker until it began sliding down, down, down. A few beads dripped onto the floor, and in that moment, everything quieted inside me.
Five. It’d only taken five stripes to come back together again this time.