REVIEW - AN ETIQUETTE GUIDE TO THE END TIMES BY MAIA SEPP 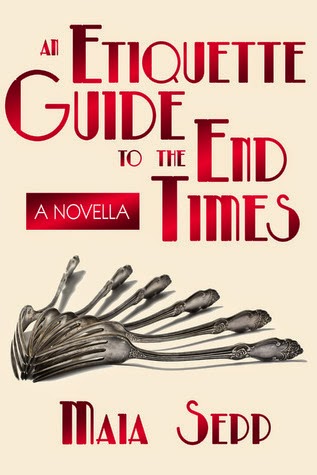 BLURB from Goodreads
There aren’t any zombies (yet), but the world is still at the brink of destruction: It’s 2028 and global warming has led to rising oceans, crazy weather, and resource scarcity. On top of that, someone just turned the Internet off. Seeing as how it’s humanity’s last chance to turn things around manners are, understandably, a bit frayed. Bookish etiquette buff Olive O’Malley is busy microfarming her urban property and minding her own business (and her chickens) when the government comes calling. Their goal is to push the populace towards carbon-neutrality while keeping kvetching to a minimum, and they come with a proposal: transition Olive’s popular etiquette column to a radio show for the masses, and they’ll help Olive find her grandfather, who’s gone missing.Olive doesn’t trust the hipster government officials who try to bribe her with delicious-but-probably-a-little-evil chocolate pastries, and declines their offer. (Politely, of course.) But they won't take no for an answer, and soon Olive is knee-deep in turmoil, eco-terrorism, and missing chickens. Now she has to untangle herself from their demands and figure out how to make sure her family (and her poultry) are safe before it’s too late.

INITIAL THOUGHTS
Not sure what to expect is it going to be a list of do & don't etiquette related lists or is it a dystopian/post apocalyptic short story/novella? From the blurb it seem's like it will be the latter.

MY REVIEW
This novella is set in a post apocalyptic future. The year is 2028 and the place is Toronto. Someone turned off the internet, and this novella shows how the people of 2028 have to cope with that. Only the "Core" have electric cars. the "Core" is the "government/ rulers".
People have had to go back to a more basic way of living. Energy saving by having solar panels, growing their own vegetables in their gardens. A bartering system is in place as money has lost it's value. People keep chickens in their back yards but to have them they have to have permits. Anyone found to have more than they had applied for and been grant permission for could and was confiscated.
The main character is Olive O'Malley, at the beginning of the novella she is up on her roof de-tangling and re-connecting wires to her solar panels that the racoons have chewed through! Olive hears a car pull onto her road which is highly unusual. After taking a curious gaze at the car she decides it must be people from the "Core" and that they have dropped by to confiscate her two extra illegal chickens.
When the people get out of the car, there are three of them. Two Me and a woman. It's the woman that speaks to Olive and tries to make an offer Olive cannot refuse. The "Core" want Olive to use her popular agony aunt style column to say good things about the "core". Olive will continue as she has been writing, they will check and perhaps edit/adjust what she has wrote prior to publishing. Olive's first instinct is a resounding NO! but then she gets to thinking that perhaps the Core could help her find her Grandpa Fred. Fred had gone visiting the resting place of a family member prior to storms etc and now Olive hadn't heard from him for . . for too long. It's not like Olive can pick up a mobile phone as all or most of the networks are down. What should she do?
Olive's neighbour discusses what she should do and offers to ask some slightly shady sea men she knows to help find Fred.
Fred and Olive have their ups and downs but Olive is really worried about Fred. So who should Olive trust to help find Fred . . . . The "Core" who could easily find him and bring him back home, they'd also lavish them with precious things such as actual hardback books, not to mention having plenty of food. Or should she trust the shady sea men?
I could waffle on and on about this novella as I really enjoyed it. You feel Olive's confusion as to who to trust and what to do. Olive seems stuck between a rock and a hard place. The Core would censor her writing to the point she probably wouldn't recognise her own work. She wouldn't have the freedom to say as she wanted to.
Then on the other hand these shady Seamen are going to want something in return and that's if they agreed to help her.  First these men wanted a good home cooked meal. Olive needed to impress them with this meal as she desperately needed their help. But food's scarce so how and where can she get the food needed for such an important meal? Unsurprisingly Olive is well thought of by her neighbours and when they hear what she need the food for they willingly trade with her.
So did I enjoy the novella? Yes, I was totally hooked and pulled into the book. I didn't want to put it down! Would I recommend the novella?  Yes it is a  really good post apocalyptic novella. In fact if Maia Sepp did any more books set in this post apocalyptic era that we glimpse in An Ettiquette Guide To The End Times, I would like to read them!       Will I read more books by Maia Sepp? I'll keep my eyes out for future post apocalyptic titles by this author for sure, as well as checking out her other book titles.