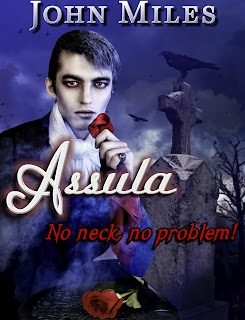 
Assula is the story of a young man who becomes—quite by accident a vampire, but with the unusual proclivity of biting butts instead of necks.
The premise of the story is that only those with evil in their hearts become vampires, all others simply die when attacked by a vampire.
What sets Assula apart is that he was apparently attacked by a very powerful vampire, perhaps Dracula himself, the same evil fiend who turned Assula’s Uncle into a vampire.
While the premise of the story is obviously meant to be humorous  and yes, at times even salacious there are serious themes  regarding the pain of being different, of not being able to share the truth with others when you’re sure you won’t be believed, as well as the fear of abandonment.


But Assula does have quite a romp in and and you never know, perhaps even lurking behind you.

Available at smashwords.com and bookiejar.com

MORE FROM THE AUTHOR

Hello:
My name is John Miles and I was born in , and I currently live in , Washington U.S.A