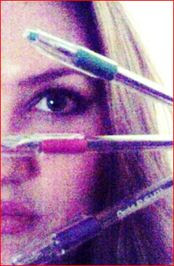 M. Leighton is a native of , but she relocated to the warmer climates of the South, where she can be near the water all summer and miss the snow all winter. Possessed of an overactive imagination from early in her childhood, Michelle finally found an acceptable outlet for her fantastical visions: writing fiction. Thirteen of Michelle's novels can now be found on Amazon, as well as several other sites. She's currently working on sequels, though her mind continues to churn out new ideas, exciting plots and quirky characters. Pick one up and enjoy a wild ride through the twists and turns of her vivid imagination.

Did you always want to be a writer? If not what did you want to be?


Actually, I never once considered being a writer, as crazy as that sounds.  I first wanted to be a lawyer then a computer programmer then a nurse.  I had a hard time settling down.  LOL

When did you first consider yourself as a "writer"?
When I wrote my first book in 2009.  I knew right then that my life was taking a new direction and that things would never be the same.  Thank God, I was right:)

Did it take a long time to get your first book published?
I self-published, so not very long.  LOL

Do you work another job as well as your writing work?
I did for a while, but I quit outside work to write full time in November of 2010.  I’ve never looked back and I’ve never been happier.

What is the name of your latest book, and if you had to summarize it in less than 20 words what would you say?
My most recent book is The Wild Ones and I’d say it’s a contemporary romance about forbidden love and what two people are willing to go through for each other.


I self-published.  And I’m very happy that I did.  I’ve learned so much!

How long does it usually take you to write a book, from the original idea to finishing writing it?
It varies dramatically!  It has taken me as long as 3 months and as short as 2 weeks.  And then, of course, pretty much everything in between.  LOL

Which of your books were easier/harder to write than the others?
The easiest was probably either The Wild Ones or Wiccan.  The hardest was probably The Reaping or The Reckoning.  They were both very dark and difficult for me.

What can we expect from you in the future? ie More books of the same genre? Books of a different genre?
I’ll continue to write in both the paranormal romance and contemporary romance, but it will all be New Adult rather than Young Adult.  I feel much more freedom writing for the New Adult crowd.

Do you have plans for a new book? Is this book part of a series?
I am currently working on a stand-alone contemporary romance, but later in the year, I plan to write book four in the Blood Like Poison series.

Is there any information you can give us about yourself or your books?
I love coffee and chocolate, even more so when they are combined.  I'm convinced that one day they could be the basis for world peace.  I also love the color red and am seriously considering dying my hair.
Posted by Jeanz xx at 11:00