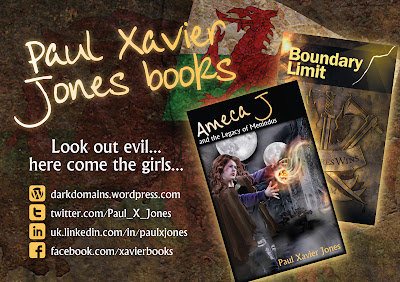 What is your name, where were you born and where do you live now?
Paul Jones, but my pen name is Paul Xavier Jones. I was born in Glanamman, South Wales, I live in Pontardawe, near Swansea in South Wales.

When did you first consider yourself as a "writer"?
When I published my first book, An Agent For Change.

Did it take a long time to get your first book published?
Yes, perhaps two years?

Do you work another job as well as your writing work?
I run two businesses as well as write books.

What is the name of your latest book, and if you had to summarise it in less than 20 words what would you say?
Ameca J and the Rise of the Serpii is my latest book, and it’s so new it hasn’t been released yet. A summary in 20 words…
“A grim adventure into the unknown where a new threat to the Universe will see the girls tested as never before”

Do you have a "lucky charm" or "lucky routine" you follow when waiting for your book to be accepted by a publisher?
Not really.

How long does it usually take you to write a book, from the original idea to finishing writing it?
That depends on a number of factors, but generally once I’m committed to the story concept and ideas around six months.

Which of your books were easier/harder to write than the others?
My most recent, Ameca J and the Rise of the Serpii was challenging, as I hadn’t written an Ameca J book for two years, and it is difficult to get the continuity from previous books right.

What can we expect from you in the future? ie More books of the same genre? Books of a different genre?
I will definitely write another Ameca J book, possibly two. I want to write a sequel to my Sci Fi Thriller Boundary Limit.

What genre would you place your books into?
The Ameca J Series is Epic Fantasy, while Boundary Limit is Sci Fi/Thriller/Horror.  An Agent for Change is adult humour/drama.

What made you decide to write that genre of book?
An Agent for Change was written as a form of stress relief at the time, as I was going through some difficult changes. The Ameca J series was written as something I would like my kids to read.

Do you have a favourite out of the books you have written? If so why is it your favourite?
Ameca J and the Legacy of Menindus is my favourite, as it was my first journey into fantasy which is my favourite genre.

Do you have a favourite character from your books? and why are they your favourite?
Major Blake Trubble is my favourite character, the main protagonist in my Boundary Limit novel. He’s cool, dangerous and has an awesome name that was great to play with. For example I could say things like, “you want trouble? You can have Major Trubble!” I know its cheesy but it is kind of where the genre is.

If you had to choose to be one of your characters in your book/books which would you be? and why?
I would love to be “the One” from the Ameca J series, as he has magical “Super-Speed.”
How long have you been writing?, and who or what inspired you to write?
I’ve been writing since 2003, and my inspiration for the first book was a dedication to my grandfather who passed away in 2001. He was a great guy who raised me, and I wanted his name on a book written by me.

Where do you get your book plot ideas from?What/Who is your inspiration?
Not sure where my plot ideas come from, but I’m definitely influenced by a lot of authors, Tolkien, Dan Brown, Stephen King, Edgar Rice Boroughs etc.

Do you have a certain routine you have for writing? ie You listen to music, sit in a certain chair?
No routine, I’m on the road every day so its wherever I get a bit of peace with my laptop.

Do you have anybody read your books and give you reviews before you officially release them?ie. Your partner, children, friends, reviewers you know?
A combination of people read my books before they are launched, some are friends, my publishers Storyteller and a few fans.

Do you gift books to readers to do reviews?
Yes I do. But I make it very clear that I want honest feedback, not just what they think I want to hear because I’ve given them a book.

Do you read all the reviews of your book/books?
Yes, although I may not agree or change things afterwards.

What was the toughest/best review you have ever had?
I had a review from a publisher who only read a chapter or two once which was quite uncomplimentary. As for best reviews, I’ve had quite a few good ones, but I was most pleased with one by Flamingnet teen book reviews where I got awarded their “Top Choice” book.

Would you ever ask a reviewer to change their review if it was not all positive about your book/books?
No I wouldn’t. I truly believe in honest feedback.

How do you come up with the Title and Cover Designs for your book/books?Who designed the Cover of your books?
I never decide on a title until I’ve written at least half the book, as it isn’t always obvious from the start. Cover designs for my self-published work are from Matthew Pugh of “Star in a Jar” and for the Ameca J series via Storyteller publishing who use a great lady called Kathey Amaral.

How do you come up with characters names and place names in your books?
For the Ameca J series, character names are either corruptions of the names of people I know or spelling mistakes!

Are character names and place names decided after there creation? or do you pick a character/place name and then invent them?
Usually after their creation.

Do you decide on character traits (ie shy, quiet, tomboy girl) before writing the whole book or as you go along?
Both really.

Do you basic plot/plan for your book, before you actually begin writing it out? Or do you let the writing flow and see where it takes the story?
Both again, however I usually start by drawing a mind map with all the variables the story is likely to contain.

How do you market/promote your books?
Any way I can! No, seriously, I use Facebook, on line community groups, I have brochures, a pop up display stand, I give talks for libraries and business groups, I write newspaper and website articles, and I give blog interviews.

What do you think makes a book a really good/bestseller ?
I think it’s the writing style and a good plot.

Have you ever suffered from a "writer's block"? What did you do to get past the "block"?
Surprisingly no, I’ve never suffered from it. I usually know what I want in the story, but describing it accurately can sometimes slow me down.

What do you do to unwind and relax?Do you have a hobby?
Reading is good, and cinema, but they are both luxuries when I’m writing and running two businesses.

Have you ever based characters on people you know or based events on things that have happened to you?
Yes, but only indirectly.

Are there any hidden messages or morals contained in your books? (Morals as in like Aesops Fables type of "The moral of this story is..")
The Ameca J series doesn’t have a moral as such, but does reinforce the strength of family relationships and why family is such an important concept.

Is there a certain Author that influenced you in writing?
No, there are many of them.

Which format of book do you prefer, ebook,hardback, or paperback?
I like ebook and paperback.

What is your favourite book and Why? Have you read it more than once?
Lord of the Rings must be a contender, and yes, I’ve read it many times.

Do you think books transfer to movies well? Which is you favourite/worst book to movie transfer?
Lord of the Rings transfer to the three movies is pretty good. Hunger Games and Percy Jackson and the Lightning Thief don’t seem to have made the transition well.

What are you currently reading? Are you enjoying it? What format is it?(ebook, hardback or paperback)
I’m reading an ebook of the “Agent Pendergast” series.

Do you think ebooks will ever totally replace printed books?
Not totally, but they will become dominant.

Do you think children at schools these days are encouraged enough to read? and/or do Imaginative writing?
No, not really. My own children don’t seem to be.

Did you read a lot at school and write lots of stories or is being a writer something newer in your life?
I’ve always read a lot, and when I read consistently I averaged four books per week. As for writing, I guess even then I was preparing for it, because when I was in school my English teacher used to get really annoyed with my stories as they would always end in “to be continued…”

Did you have a favourite author as a child?
No, but I loved Doctor Who books.

Do you have a treasured book from your childhood? If yes, what is it?
Lord of the Rings

Do you have a favourite genre of book?
Yes, Fantasy followed closely by Science Fiction.

Is there a book you know you will never read? Or one you tried to read but just couldn't finish?
Fifty Shades of Grey…

Is there anything in your book/books you would change now if you could and what would it be?
No, I’m pretty happy with them.

What do you think about book trailers?
Don’t have much experience of them.

What piece of advice would you give to a new writer?
Be persistent, and never give up trying to get published, or even self publish if they believe in their work.

Do you or would you ever use a pen name?
I already use Paul “Xavier” Jones. It’s based on an old nickname for when I worked for a multi-national electronics company.

If you could invite three favourite writers to dinner, who would you invite and enjoy chatting with?
Stephen King would be a must, I’d love to meet Edgar Rice Boroughs and Robert E Howard, the authors of Tarzan and Conan respectively, but that could never happen as they are both in “writers heaven.”

Your Web site? Under construction, but will be www.paulxavierjones.co.uk


And any other information you wish to supply?
Ameca J and the Legacy of Menindus will be available from October 9th 2012.