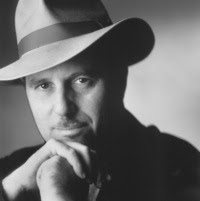 When did you first consider yourself as a "writer"?

When I was five, I’d affix a stool to two upturned kitchen chairs and drive around the world. I didn’t know it at the time, but the writer was born. In grade school I wrote compositions, and in high school, poetry. My poems were published in the small press by the time I was in college, where I studied writing with the late Pulitzer Prize-winning poet James Wright.

I’ve been a professional writer most of my life. Besides my poetry as a young writer, I was a Newhouse newspaper reporter in New York, later turning to public relations. I’ve worked as PR director in higher education for more that two decades. Along the way, I was also a Nashville songwriter and later a recording artist, although with an urban bent as I returned to my city voice.

What is the name of your latest book, and if you had to summarize it in less than 20 words what would you say?

The thriller “Hell City” — Tracking a new generation of jihadists, a counterterrorism commander finds love and a “lost” America in this darkly comic novel.

Blue City Media, my own imprint.

Since readers have told me they hated leaving behind the characters in “Hell City,” I started a sequel. The working title is “1959,” but I feel that will change. Synopsis: Devastated from the aftermath of a New York City terror operation, counterterrorism commander Jack Oldham reverts to boozing and whoring to salve his wounds. To save him, his boss, Captain McClintock, assigns the former homicide dick the city’s most famous cold case as a form of occupational therapy. The case: the brutal 1959 murder of a starlet that has confounded the best criminal minds for a half century. McClintock had no idea the irascible cop might actually solve the case.

Literary thrillers, but don’t let the “lit” term scare you off. My style is gritty, streetwise and actually quite fun to read as the action moves apace and the scenery is adorned with crackling imagery.

Where do you get your book plot ideas from?What/Who is your inspiration?

Way back I read authors — Joan Didion, for one — describing how characters and books took on a life of their own. I finally understood what Didion meant when I began “Hell City.” I feel like I don’t find stories or characters. They find me. I feel like a conduit. No novel is easy to write, but the plot of “Hell City” came to me one night, circumstances of which I can’t reveal since they’d serve as a spoiler. But I can say that it has to do with another major terrorist attack on New York City. In recent years, I had read much about a new generation of jihadists, Internet imams like the late Anwar al-Awlaki who had influenced a number of Americans to commit lone-wolf acts, like Army Major Hasan who shot and killed 13 at Fort Hood and the Christmas Day bomb attempt on an airliner over Detroit, both in 2009. I realized that Americans were becoming inured to new alert systems that accompanied these events. They were feeling like all al-Qaida was capable of was the lone-wolf attack, that they could no longer pull off a complex operation stateside, like 9/11. But that made me think about the original attack on the World Trade Center in 1993, and how that botched attempt to bring down one of the towers left us with the impression at the time that al-Qaida was the terrorist “gang that couldn’t shoot straight.” So, we went to sleep on them. Then, boom, bam, boom — three airliners in three places — 9/11. If that wasn’t a wake-up call on the capabilities, on the long-term tenacity of al-Qaida, I don’t know what is. So, flash forward. Bin-Laden’s killed along with dozens of Qaida commanders in hundreds of drone strikes through the Af-Pak region. Again, we’ve become comfortable, too comfortable. Many feel Qaida’s too broken, but they’re not seeing the deeper, broader rootlets of the organization. Today, the Middle East and North Africa are on fire, and a metastasizing insurgency, whether under the al-Qaida banner or otherwise, is fomenting, and fast. That’s why “Hell City”’s hero, counterterrorism commander Jack Oldham, believes Qaida’s not dead yet — don’t go to sleep on them, he warns. But while the novel strikes the central nerve of our times, don’t think it all takes place somewhere overseas. Most of the thriller, by far, takes place in New York, and the reader is even treated to two road trips across America, with kitschy roadsides attractions along the way. And did I mention a love story in the midst of it all? And my inspiration? — My wife, Roxanne. She was working on a nursing assignment in the city, a place that was new to her. Since we live two hours upstate, this old Gotham hand accompanied her on many trips. Her excitement for the city was infectious and reinvigorated my own passion for the my hometown. That renewed energy helped the novel to be born.

My routine is simple. I write every day, whether it’s 200 words or 1,000. I have a name for the principle behind this: Garbage. You heard right. Why garbage? Decades ago, when I was single, I noticed how much garbage I accumulated. It kind of blew my mind. I’d think, “How does one person mount up so much garbage?” Then it hit me: if so much garbage builds up almost unnoticed one piece at a time, just imagine how much writing I’d get done if I’d just do some — no matter how much — every day. The trick is not to think about it. Don’t start counting your chickens. Just focus on that day’s work, then the next. A few months down the line, you can take a look and see how much prose you’ve piled up in that bag. It’ll blow your mind. One more thing, and this comes via Papa Hemingway: always stop the day’s writing at a point where you know what happens next.

I start with a working title. “Hell City” was originally “Century 21.” I liked it because I felt the book told the story of a transition, a difficult one, from the 20th to the 21stcentury. Then a few early readers, including one of the book’s editors, told me they didn’t like the title. It wasn’t strong enough, that a book like this needed some real punch. So, I came up with dozens of ideas, mulled them over for weeks, until “Hell City” rose to the surface. Two punchy words that said so much. My editor agreed. On the cover, I was considering going with an experienced but reasonably-priced book designer. However, conferencing on the project would take place mainly via e-mails or online forms. So, I decided to go with a great designer I have worked with for 20 years. David Homsey had never done a book cover before, but together we had won 80 national awards in advertising in the field of higher education (part of my day job as college PR man). With David, I could have face-to-face talks and real back and forth. I had full confidence in his ability to pull it off, and he did. By the way, I ended up shooting the photo that was used in the design. Stock companies wanted way too much, so I found a park in Queens, opposite the Empire State Building, set up my Nikon on a tripod and went at it.

How do you come up with characters names and place names in your books?

In “Hell City” I went for complex, colorful characters. I wanted one of the NYPD cops, a sidekick of the main character, to be brash and somewhat comical. So, I made him a small, bald guy nicknamed Lucky, since his real name is Vincent Luciano. As I let him unfold through the first writing, I realized he reminded me of Joe Pesce, the actor. Somewhere along the line, my ear must’ve come naturally to that funny gritty-city toughness. A real wiseass who makes politically incorrect passes at barmaids. Some characters are composites. One came from my irascible father-in-law, a charming amateur magician who’s also so annoying he’s been thrown out of churches throughout Florida. So, I turned him into a Jew (this is New York, after all) and made him a neighbor of the main character. His name: the Amazing Myron. He’s a hoot, but also figures into the plot in a surprising way. As for places, this book, set mostly in New York, is full of them: old pier houses, historic hotels, Coney Island, but also a dive bar hangout called The Christmas, with a tacky holiday décor year-round. The later was based on an actual West Side bar, but I changed the name and took liberties with the set design. 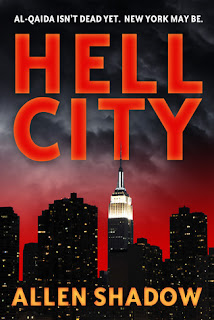 BLURB from Goodreads
Al-Qaida isn’t dead — yet! That’s what counter-terrorism task-force commander Jack Oldham believes as he tracks a new generation of American-born jihadists through a post-bin-Laden world. In “Hell City,” New York is ground zero once again as the former NYPD homicide dick and his crack but colorful crew patrol a maddening world of clues that takes them through the grittiest precincts of the city, the back roads of America, the lawless regions of Pakistan, the faceless chat rooms of the Internet and the dark corridors of the military-intelligence complex — not to mention the whiskey-tinged environs of The Christmas, a raunchy dive bar in Hell’s Kitchen frequented by Jack and other oft-recovering alcoholic cops.Along the way, Jack strikes up an unlikely romance with the last lovechild of Beat-generation guru Neal Cassady as they share a lust for the city’s dark side and a yearning for a “lost” America. Through powerful, hard-boiled prose, this darkly comic, streetwise novel twists the mind, the language and the senses as it heads for a crash course with disaster.