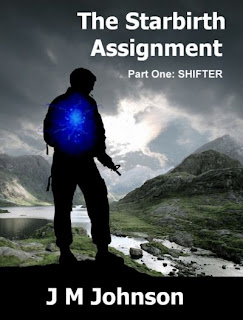 What is your name, where were you born and where do you live now?
My name is Jackie Johnson and I was born in England, United Kingdom (otherwise known as Great Britain) which is where I live now.

What is the name of your latest book, and if you had to summarise it in less than 20 words what would you say?
My latest book is The Shifter Dimension.
Summary in twenty words: Set in real-life situations Lock Harford is a teleporter (Shifter) working alongside Special Forces facing personal and external battles.

Who is your publisher? or do you self publish?
My books are self-published. In the UK it’s very difficult for anyone, including established authors, to find a literary agent or publisher willing to take them on. For a first-time author it is well-nigh impossible unless there is a celebrity factor.

Which of your books were easier/harder to write than the others?
The hardest book to write was the first one, The Starbirth Assignment Part One: Shifter, because it was a learning curve for me in writing techniques and because the first book of a series establishes the characters, which takes time and effort. It took several years of research into military and intelligence communities (and help from various individuals) to manufacture a realistic background for the characters. Then I added the notions of mental powers allowing teleportation (the ability to use an altered state of consciousness to move one’s body through another dimension), transmutation (using mental visualisation to alter one’s physiology, shape-shifting) and other abilities on the basis of how the modern world would react to people possessing those powers. My thought was that intelligence agencies and Special Forces would be very interested.

Do you have plans for a new book? Is this book part of a series?
The next book, Shadow Team UK, is underway and it will be the fourth book in the Starbirth series, following the exploits of Lock Harford, Jimmy Mackenzie with the addition of new characters.

What genre would you place your books into?
My books fall into the science fiction genre but they have action adventure overtones.

What made you decide to write that genre of book?
The military/intelligence/sci-fi genre is not one that people might readily associate with a female author. I was intrigued by military and intelligence worlds and had a lifelong interest in science fiction novels, so it was an obvious alliance for me.

Do you have a favourite character from your books? And why are they your favourite?
Actually there are two favourite characters. Jimmy Mackenzie is a Special Forces (SAS) trooper, dedicated to his chosen career as a soldier, courageous, aggressive when he needs to be and willing to be quite crafty to get what he wants. He’s everything I’m not. Steven Stringer is an intelligence officer, a Machiavellian character intent on pulling everyone’s strings while guarding against becoming a puppet himself. They are both fun to write.

Do you choose a title first, or write the book then choose the title?
The title is not usually worked out before the text. In the case of the first books The Starbirth Assignment (Parts One and Two) the titles underwent several changes before the final choice.

Do you decide on character traits (ie shy, quiet, tomboy girl) before writing the whole book or as you go along?
For me this was one of the fascinating aspects of writing. Starting with a core of character traits, as above, I found that after a while it was as if the characters wrote themselves. I couldn’t force them to do what they didn’t want to do or wouldn’t reasonably do. They seemed to take on a life of their own and frequently their reactions would pop into my head seemingly out of nowhere. It is a very strange experience which makes me feel as though they are as real as I am, and I suppose this is the case for most authors.

Do you basic plot/plan for your book, before you actually begin writing it out? Or do you let the writing flow and see where it takes the story?
It’s a combination of both. I have a basic plot in mind but often once I begin writing, other ideas will take the plot in directions I hadn’t foreseen.

Have you ever suffered from a "writer's block"? What did you do to get past the "block"?
Yes, many times. I have found the only thing to do is take a break, let it pass, don’t worry about it. Turn my mind to other things temporarily, usually get involved in physical things like going for a walk. Fretting makes it worse. For me it’s a sign the mind is exhausted by following one line of thought and it needs a break for however long that takes.

Do you think books transfer to movies well? Which is your favourite/worst book to movie transfer?
Many books make excellent films without losing the magic. In my view the film becomes another facet of the book, not a replacement. My favourite transfer is Peter Jackson’s film Lord of the Rings (JRR Tolkien), which was a favourite set of books in my younger days – it was amazing that everything I had imagined when reading the books was there on the screen. Absolutely breathtaking.

What are you currently reading? Are you enjoying it? What format is it?(ebook, hardback or paperback)
Single & Single by John le Carre. I love his writing and admire him greatly. I wish I could write as well as he does. The book is a paperback – I am enjoying it although part of the way through the plot is complicated and not helped by a flashback format, but it doesn’t diminish his creative powers.

Did you read a lot at school and write lots of stories or is being a writer something newer in your life?
I was always reading and lost in the worlds that books created. I did write, but then teenage years came along and writing was shelved. I started writing seriously about eight years ago.

What piece of advice would you give to a new writer?
Never give up on your dream, but be realistic about your skill level. Even if you feel like throwing the papers across the room (as I have done) or deleting the whole project, don’t. Gather the papers up and keep trying. There is always going to be someone better at writing than yourself, or someone you emulate and can’t reach, and there is always something new to learn. Take time to edit your work yourself, leave sufficient time between finishing a project and reading it again because mental distance will allow you to see where alterations need to be made. Above all, remember it gets easier with time and practice.

Your blog and web site ?
http://www.starbirthassignment.com

Any Other Information you wish to supply?
Yes I would like to tell your readers about the FREE book days I have coming up, the first two dates are 10th and 11th October, and there will be more probably the week after but I haven't finalized the dates yet.

Thank you for taking part in the Interview and for the FREE book dates too!