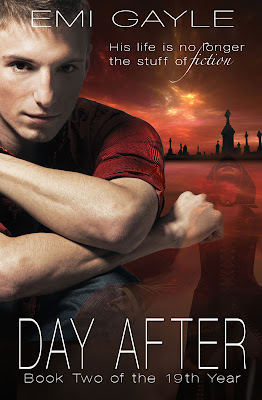 Day After
Book 2 in The 19th Year Trilogy
by Emi Gayle
Release Date: May 6, 2013
Target Reader: Young Adult
Keywords: Paranormal Romance, Romance
Back of the Book

Or so Winn Thomas always thought.

Since being accepted into the fold of the supernatural, he knows better. None of what he imagined is true, but everything he feared is, and binding himself to his changeling girlfriend until her nineteenth birthday will give him an education far beyond what he’d get at his human high school.

Luckily, Winn’s not giving up, he won’t back down, and he definitely isn’t going to run away with his tail between his legs. After all, only werewolves have tails. Right?

In this, the second of the 19th Year trilogy, Winn’s facing the challenge of one lifetime. If he doesn’t learn the truth about mythological creatures, his girlfriend Mac Thorne won’t either. That means, in six months, when she chooses her final form, she won’t know what to pick.

Winn, though, has his own ideas about Mac’s final selection—plans she knows nothing of.

He intends to have her pick human.

Whether she can or not.

Other Books in this series include:
After Dark (Book 1)

MY REVIEW OF THE COVER
I haven't read the first book in the series so knowledge of the book plot etc cannot influence my view of the cover.
I do tend to be attracted to book cover with "people" on them. Presumably the male on this front cover is "Winn". You can also see the city skyline in the right side background of the cover. Also there is a kind of ghostly image of a woman.
Hmm the cover makes you want to know more about the book, so yes it would make me pick it up from a shelf and read the blurb.
So do I like the cover? Yes, it's interesting.
Posted by Jeanz xx at 02:00