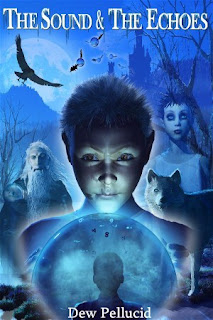 What is your name, where were you born and where do you live now?
My name is Dew Pellucid, the oldest Echo at the Orphanage of Castaway Children. I was born in the village of Nachal Katan, on the Northern tip of Agám Kaffú. To discover the meaning behind our Echo names (for there are definite meanings) come visit us in our frozen, glistening world. And then you will discover which character I play in the story I have written.

When did you first consider yourself as a "writer"?
Once upon a time, there was a small Echo boy with a large imagination. He read over a million books by the age of ten, wrote silly stories to share with his stuffed animals, then felt silly writing good stories to share with his friends. But it was only when, at last, his tale of the Echoes reached the Sound realm that he felt himself to be a writer for the first time.

Did it take a long time to get your first book published?
180 literary agents rejected The Sound and the Echoes. It is forgivable; after all, they were all Sounds. And how long did that take? Two years, which for an ancient man may not seem long, but was enough to grow tiresome.
Even so, it was not a decision made lightly… to give up the fight. It was more a recognition that the story was too good to freeze over until the end of time. With the help of a magnificent artist, “The Sound and the Echoes” was published. It is like no other story told before, and that may be its swan song or its soaring flight.

What is the name of your latest book, and if you had to summarize it in less than 20 words what would you say?
There is a see-through, frozen world were our reflections live. They call themselves the Echoes, and we are the Sounds. And now, twelve-year-old Will Cleary is swept into this realm, to help his Echo find a secret passage that will save the kingdom and Will’s family. That is the essence of The Sound and the Echoes.

How long does it usually take you to write a book, from the original idea to finishing writing it?
It was in the middle of the night that I first conceived of the realm of the Echoes. Thinking of Plato’s Realm of the Forms, I imagine that concept in reverse. What if there was a place that was a reflection of ours? We were considered perfect, and they nothing more than Echoes….
Over the next six years, the walls of my room became plastered with bits of paper that formed a plot-tree, a visual map of the world of the Echoes. And now that readers compare this universe to Harry Potter’s, not because they are the same, but because the Echo realm feels as real as Harry’s world… now I know that all the mind-bending work was worth it!

Do you have plans for a new book? Is this book part of a series?
At first, I named the book, “The Crystillery”, and the series “The sound and the Echoes”. But creating such a complex world was so soul-consuming that I shall not do it again unless the novel gains sufficient readership. Then, and only when, the Echo realm becomes real for others as well as me, then will I write a sequel.

The Sound and the Echoes Book Links: