PROMO/REVIEW - PRISONER OF NIGHT AND FOG BY ANNE BLANKMAN

From debut author Anne Blankman comes this harrowing and evocative story about an ordinary girl faced with the extraordinary decision to give up everything she's ever believed . . . and to trust her own heart instead. 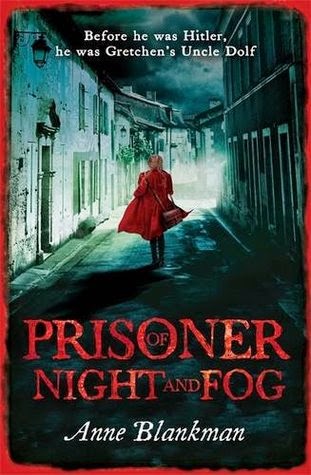 BLURB from Goodreads
In 1930s Munich, danger lurks behind dark corners, and secrets are buried deep within the city. But Gretchen Müller, who grew up in the National Socialist Party under the wing of her "uncle" Dolf, has been shielded from that side of society ever since her father traded his life for Dolf's, and Gretchen is his favorite, his pet.Uncle Dolf is none other than Adolf Hitler.And Gretchen follows his every command.Until she meets a fearless and handsome young Jewish reporter named Daniel Cohen. Gretchen should despise Daniel, yet she can't stop herself from listening to his story: that her father, the adored Nazi martyr, was actually murdered by an unknown comrade. She also can't help the fierce attraction brewing between them, despite everything she's been taught to believe about Jews.As Gretchen investigates the very people she's always considered friends, she must decide where her loyalties lie. Will she choose the safety of her former life as a Nazi darling, or will she dare to dig up the truth—even if it could get her and Daniel killed?

INITIAL THOUGHTS
Not totally sure what to expect, will it be similar to The Book Thief? Will it try to portray Adolph Hitler as a "good but misunderstood man" Will it be a realistic portrayal of one of the most hated men in history?

MY REVIEW
I received this book from the publishers in exchange for my honest review.
I felt drawn to the cover of this one. The young girl hurrying down a deserted road. The cover could fit as an image from the book when Gretchen is running to find Daniel. I immediately compared this book to The Book Thief by Marcus Zusak, though this book is set slightly before in era than The Book Thief. This book is before Hitler actually cam into his true horrendous power. Although like The Book thief this book deals with the real "normal" Germans and how they were affected by Hitler.So at the beginning of the book Gretchen is still grieving her fathers death. Even though he is hailed as a hero, him being shot whilst shielding Hitler from bullets. In fact her father and Adolf Hitler were at one time close friends,brought together by the war. They served together and fought in the trenches together. They were separated from the other troops when the were attacked by gas. Hitler and Gretchen's father were sent to a special hospital, where a diagnosis was given that becomes an important part of this story.
So Gretchen has grown up as a niece figure to Adolf Hitler. Hitler has love only for his country, yet loves to surround himself with pretty young girls such as Gretchen, his own half cousin Geli and his favourite photographers assistant Eva...
The story tells how Gretchen becomes aware that her fathers death was not one of a martyr. Her father was shot both fro the front during the march and also in the back by someone in his own political party too, bit who? Gretchen also has an "odd" brother in fact like Hitler, her brother Reinhardt was also labelled a psychopath.  So by now in the book we have met Adolf's niece (Gretchen) and nephew (Reinhardt). The nephew sounds like he strongly believes as Hitler does in persecuting the Jewish etc. Reinhardt seems to have no emotions at all he is so sadistic to his family. Gretchen seems to know it is wrong for the Jews to be persecuted but is scared to upset her uncle. As "Uncle Dolf" "protects" and has helped the family financially.
The first pivotal moment  we see Gretchen with doubts about "Uncle Dolf's" political ways is when Reinhardt, his friend Kurt and Gretchen and her friend Eva are all in a car going to a local cafe to meet Hitler or Uncle Dolf as affectionately called at this point in the book.  A dark figure runs across the road in front of the car. When Kurt & Reinhardt miss the man they slam their brakes on and chase the man who is a Jew down into an alley where they begin to beat him up. It is at that moment that Gretchen truly realises that the Jews Hitler wishes to remove from Germany are real living breathing people who like her family are just trying to survive. It seems like the scales or rose tinted glasses have fallen away from Gretchen's eyes and she is seeing Hitler for what he truly is and all that he stands for. She is herself flirting with danger trying to find out who killed her father and why which puts her in close contact with a jewish reporter." Gretchen becomes quite determined regardless of the risks to get to the bottom of how her father died and enlists the help of a local jewish reporter.  Gretchen turns out to be a really good detective but gets herself in some life threatening situations but with Daniels help uncovers a lot of things too. So there is a little romance within the book, as well as betrayal, secrecy, with plenty of drama and suspense too.
The characters are well written and you end up feeling sorry for Hitlers half-niece Geli,  seems to have it all, she lives in luxury in Hitlers apartments in a wealthy part of town and can go shopping and spending money without having to earn it. Geli, Gretchen & Eva are the young girls whom Hitler likes to be seen dining. Hitlers moods do change from one minute to the next. It's like he acts like an Uncle to Gretchen as if he truly cares about her yet when Reinhardt beats his sister Hitler instantly takes the Reinhardt's side. He say's something like Reinhardt is the man of the house you must learn to do as he wishes! So the man is not just racist but sexist too. Uncle Adolf is only happy playing Uncle when everything is going to plan.
So did I enjoy the book? Yes, I really did enjoy it and would make it comparable to The Book Thief.  Would I recommend the book? Yes, it is YA aimed, more so than The Book thief I would say. Would I read another if this was the first in a series? If there was more to come about Gretchen and Daniel, yes I would want to read it. Having said that I think that this book also works really well as a standalone novel. Would I read other books by Anne Blankman? Yes, I would take a close look at anything written by this author as I really did enjoy her writing style and pace as well as the book content.