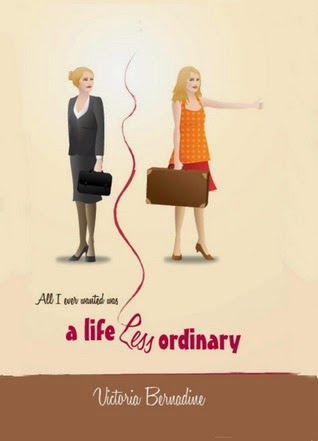 BLURB supplied by Reading Addiction Blog Tours
For the last fifteen years, Rose “Manny” Mankowski has been a very good girl. She turned her back on her youthful fancies and focused on her career. But now, at the age of 45, she's questioning her choices and feeling more and more disconnected from her own life. When she's passed over for promotion and her much younger new boss implies Manny's life will never change, something snaps. In the blink of an eye, she's quit her job, sold her house and cashed in her pension, and she's leaving town on a six month road trip.

After placing a personal ad for a travelling companion, she's joined in her mid-life crisis by Zeke Powell, the cynical, satirical, most-read – and most controversial – blogger for the e-magazine, What Women Want. Zeke's true goal is to expose Manny's journey as a pitiful and desperate attempt to reclaim her lost youth – and increase his readership at the same time. Leaving it all behind for six months is just an added bonus.

Now, armed with a bagful of destinations, a fistful of maps, and an out-spoken imaginary friend named Harvey, Manny's on a quest to rediscover herself – and taking Zeke along for the ride.

ABOUT THE AUTHOR
Victoria Bernadine (a pseudonym) is, as the saying goes, a “woman of a certain age”. After  twenty-something years of writer’s block, she began writing again in 2008. Victoria enjoys reading all genres and particularly loves writing romantic comedy and post-apocalyptic science fiction. What those two have in common is anybody's guess. She lives in Edmonton with her two cats (The Grunt and The Runt). A Life Less Ordinary is the first novel she felt was good enough to be released into the wild.

What is your name, where were you born and where do you live now?
My pen name is Victoria Bernadine, I was born in Saskatchewan, Canada and now live in Alberta, Canada.

Did you always want to be a writer? If not what did you want to be?
Yes, and no.  I always loved to write, but being a writer seemed to be out of reach, especially after I was in university and the creative flow dried up.  I wanted to be an historian, a teacher, an adventurer...definitely not what I’ve been doing for the last 20 or so years (*cough* government employee *cough*)!

When did you first consider yourself as a "writer"?
That’s a loaded question, because it sort of hits me at various moments.  I’ve been writing fan fiction since ~2008, and I first got a hint when I was working on one of my fanfics and realized that it was actually damn good – and not just because I loved the show/characters so much!  There’s my sole Star Trek fic which I’m incredibly proud of, because it’s so different from anything I’ve written before, and I have no idea where it came from – LOL.

How long does it usually take you to write a book, from the original idea to finishing writing it?
It depends on how much I love it, and if there’s a deadline – LOL.  Many of my novels have been written for online writing challenges, so there’s a posting date.  Generally speaking, it takes me anywhere from six months to two years to get to that final “ready for the world” product.

Which of your books were easier/harder to write than the others?
A Life Less Ordinary was a breeze.  OMG, I couldn’t write it fast enough!  Editing was slower, but it still flowed.  Historian’s Daughter (which I’ll be publishing later this year), on the other hand, was such a struggle!  Probably because I started with one heroine and ended up with a completely different one – LOL – and I struggled against the change much longer than I should have.

What can we expect from you in the future?  ie More books of the same genre? Books of a different genre?
Both!  LOL  I have three books planned for release later this year.  Two of them are already written, and one is still in the first draft stage.  One is another romantic comedy (Along Came Jones); one is a tragic romance set in a dystopian, post-apocalyptic setting (Historian’s Daughter), and the third is a post-apocalyptic science fiction novella (Plugs).  Waiting in the wings are a sequel to A Life Less Ordinary (called A Year in the Life), and a novelization of a script about alien invasion and ghosts (erm, no title yet).

Ooo I love dystopian & post apocalyptic genre books.. Please give me a shout when you want them reviewing & promotiong!

Then it’ll be time to look at the Plotz Bunnies Farm and see what’s hopping.  If I don’t get distracted by one hopping by, first!

Where do you get your book plot ideas from?  What/Who is your inspiration?
My ideas come from anything and everything and nothing – LOL.  A Life Less Ordinary was inspired by the way I was feeling at that point in my life, and how I really, really, REALLY wanted to throw everything up in the air and run away with a handsome young man in a hot red convertible.  I couldn’t do it myself, so I had Manny do it (sort of) for me.  Historian’s Daughter was intended to be a blatant ripoff…erm…homage to a series of books by Mary Balogh (the Slightly series), especially her character of Wulf (ah, Wulf.  I adore him), and ended up as something completely different.  Plugs came from looking at how dependent/intertwined we’re becoming with our technology, and wondering just how far we’re going to go with it.  PBS documentaries helped the idea along.  Along Came Jones was inspired by Nathan Fillion (he’s adorable!!) and the season 5 finale of Castle and how annoyed I was with it.  It was supposed to be a fanfic but morphed into this completely different thing.

Do you gift books to readers to do reviews?
I do.  I’ve run a giveaway through LibraryThing, and review copies are available to blog hosts during a virtual book tour.  I don’t know if I’d just gift a book upon request, unless (I suppose) the person has a strong blog presence, works for some kind of news/reviews organization, is somebody I know (LOL), or something similar.  On the other hand, I’ve never been asked, so who knows what I’d say?

Do you read all the reviews of your book/books?
Yes.  I’ve been very lucky in that I’ve received mostly favourable reviews.  If they were all negative, I think I probably would have pulled the book from all the stores, and never published again – LOL.  I’m a little scared about Historian’s Daughter and Plugs, so I may (or may not) read those reviews, because I love the books very much, but I know they’re not going to appeal to everyone.

Would you ever ask a reviewer to change their review if it was not all positive about your book/books?
Never.  A review is supposed to be an honest opinion, so to ask somebody to change that review because it’s not all positive kinda defeats the whole purpose of it, I think.  Which isn’t to say that I’m not affected by a bad review, but I’ve also been around enough to know you’re not going to please all the people all the time, and, at the end of the day, you’re going to survive somebody criticizing your work.

Do you choose a title first, or write the book then choose the title?
The title usually comes to me at some point during the writing process.  I just start writing scenes without any idea what’s going on, so the title often changes several times during the first draft.

How do you come up with characters names and place names in your books?
I’ll sometimes pull names from whatever I’m watching on TV at the time.  LOL  Place names are just things I invent, or else I use real places.

Do you decide on character traits (ie shy, quiet, tomboy girl) before writing the whole book or as you go along?
As I go along, because I don’t plan my books, so most of the time, I have no idea who the character is who’s saying these things.  I may start with one set of character traits, and as the character is fleshed out, I’ll end up with something completely different.  It’s like meeting a new person in real life!

Do you basic plot/plan for your book, before you actually begin writing it out? Or do you let the writing flow and see where it takes the story?
I let the writing flow and see what happens.  During the writing, I’ll make “plot notes”, which are usually me talking to myself:  “Okay, why is this guy being such a jerk?  No, that’s a stupid idea…how about…”  “Why doesn’t she just tell him this secret – besides the fact this would be a very short book if she did…”  “What happened between these characters to make them act this way towards each other?” and so on, and so on.

Have you ever based characters on people you know or based events on things that have happened to you?
Manny, in A Life Less Ordinary, was based on how I was feeling at the time, but I don’t completely base characters on real people.  I may pull a characteristic, or an event and then spin it for the purposes of the story, but there’s no one-to-one correlation of character to real person or story event to real-life event.

I do use actors to help me anchor my characters, but I’m not writing about the actor; I’m writing about a character who happens to look like that actor.  It helps me keep physical characteristics straight and it also helps give me a sense of how the character would sound when they speak.

Which format of book do you prefer, ebook,hardback, or paperback?
I still prefer paperback.  I love my Kindle, but there’s something about the weight of a book in my hand…yeah.  That’s the best.  And I couldn’t imagine not having books in my house.  They’re very comforting to me.  Plus I’m more comfortable reading a paperback in the bathtub than my Kindle.

Do you think ebooks will ever totally replace printed books?
Eventually, probably.  It’ll be a sad day (in my opinion), and the fragility of the e-book format makes me shiver, but yeah.  I think we’ll eventually get there for pretty much everything.

Is there a book you know you will never read? Or one you tried to read but just couldn't finish?
Oh, lots, but the one that immediately springs to mind is Lord of the Rings.  Or anything by JRR Tolkien, actually.  I feel guilty about it, because as a fan of epic fantasy, I really should try reading it again – but not guilty enough to actually make the attempt.  J

Is there anything in your book/books you would change now if you could and what would it be?
If I’d known I was going to write a sequel to A Life Less Ordinary, I would have paced some of the secondary stories a bit differently.  Some of them were rushed a bit because the book was ending, and – yeah.  I could have written more/extended them to a more appropriate length.

Your Blog Details?  Victoriabernadine.wordpress.com
Your Twitter Details?  @vicbernadine
And any other information you wish to supply?  People can also e-mail me at loveofwords@shaw.ca.